Once again this August the fine folks are BrigadeCon have furnished 31 questions to be answered over the course of the month. Last year I found out about this at GenCon and rushed to catch up, this year I have the luxury of foreknowledge and I am considering suspending my normal posing routine to instead do a blog post a day to tackle RPGaDay.  We'll see if I can't set up enough posts ahead of time to cover the first week and a half while I am vacationing, and if so I'll probably carry it through. We'll see what happens, but if so it means story seeds and Nuts & Bolts will take a break until September.
Posted by Marc Plourde at 12:30 PM No comments:

Email ThisBlogThis!Share to TwitterShare to FacebookShare to Pinterest
Labels: RPGaDay

Year of the Demon Lord - This is No Cave

**Spoilers for A Case of Consumption below**

Last night my group, in their last Expert level hurrah found themselves in the town of Thorpe. Our oracle determined that there was work to be done in town in the name of the New God and the promise of coin and a chance for help with their quest to find a cure for the people of Blackstone Ford led the players to the castle of Roderick Garlach. The Lord's kids were missing, gone in the night from their sick beds.

It was short work for Runt the orc to use his tracking skills to find suspicious donkey tracks leading from an unsecured pantry door. The trail led them to a seaside cave where the children's' uncle was distraught. He's brought them here to cure them by the ways of the Old Gods but was now worried it had been a mistake. There was nothing to do but enter the cave and rescue the children if they yet lived.

The cave turned out to be a linear exercise in survival skills and careful navigation. The group soon began to suspect that this was no cave, but in fact a massive creature (it was) and soon they found themselves in the gizzard, their fears confirmed. Wisely they avoided antagonizing their host and were able to make it to the digestion chamber with very little incident apart from a ghastly chorus of prior victims. The digestion chamber found the group confronting a massive living tar and rescuing the three children from horrific fates. Successful in their quest the heroes had to guide the children out the creatures bowels and home to a happy reunion with their family, marred only slightly by the disfigurement of Lord Garlach's daughter Vanessa.

A Case of Consumption turned out to be quite fun. We had 3/4 of our group but I didn't need to dial the difficulty at all because they played it smart and used their brains as they navigated the creature's guts. This also marks the second consecutive session with a poop-centric plot (we ran The Feast of the Father last month), which really makes me a crappy GM (sorry, I've been holding that in for ages).

Best of all I was able to squeeze this one out in about 2.5 hours with some added on RP that I ad libbed to help tie this into the campaign. Our next session will advance into master territory and be our last so I need to find a good denouement, but after last night's session I feel really good about maybe closing up this campaign well.
Posted by Marc Plourde at 12:30 PM No comments: 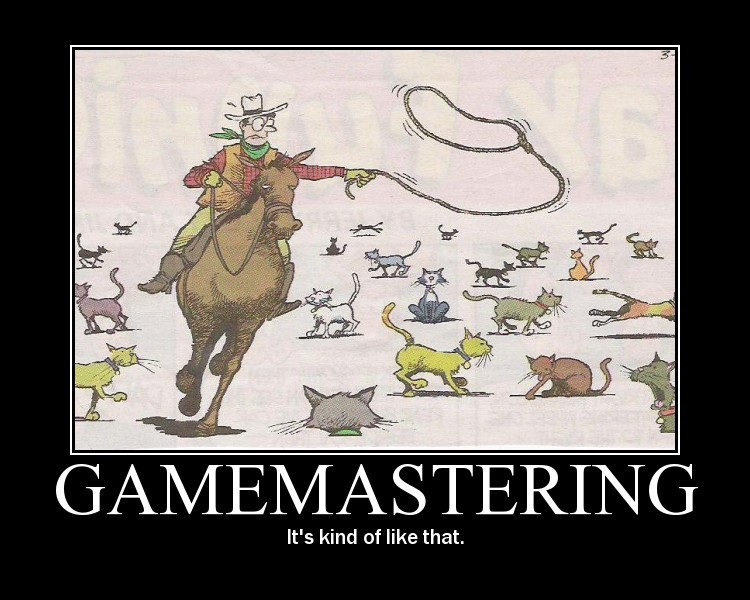 So recently (as in this past weekend) a friend asked what it took to be able to GM a game. He's played a little bit of Cypher System before, and I think perhaps some D&D but this was the first time he'd expressed interest in GMing (at least to me). I gotta say that the question was an interesting one because it immediately got three different answers from the other three of us at the table. We mostly agreed with each other in a general sense, but each had different thoughts on what was most important, which I found interesting.

So what jumped to my mind first? For me it's knowledge of the rules, at least well enough to be able to at worst reference the book only once or twice in a session. Obviously this has a certain scale to it. A new GM , or a GM running a new system gets more leeway, but in general I feel that the GM should be capable enough with the rules not only to be able to play and run the game, but they must be able to teach the game as well (though they may not need to). This doesn't have to mean that they can recite every rule as written, but a solid understanding is needed, and helps to facilitate being able to make a ruling on the fly to keep the game going (instead of diving into the book to see how something should be done).

What else? Improvisational skills are pretty useful, as even the best written adventure and the most "behaved" group of players will probably find a way to make their GM improvise. It may be simple PC to NPC interactions where the GM needs to make the town mayor interesting beyond simply being a quest giver. Or it may require being able to recover smoothly when a player comes up with an idea that or executes an action that wasn't accounted for in the session design. At the other end some GMs plan very little beyond a few key moments and improvise the rest of the time.

If you're using an established setting you probably should have a decent knowledge of the setting to work with. Hopefully at least enough to know what kind of things fit in the genre and themes without standing out weirdly. Of course if you make your own setting you will need to know enough about it to answer questions, or be able to improvise answers and make notes as you add those facts to your creation.

There's also some value in doing the work and prepping for a game when you are GM. Again, being able to improvise is nice, but it helps to at least be prepared with some degree of story plan or the like. The less comfortable with improv you are the more planning time you should probably spend.

But what about you my readers? What skills do you think a GM needs to have to run a game? What do you say to a person asking about GMing for the first time? Hit the comments, I'm curious to see what other people have to say.
Posted by Marc Plourde at 12:30 PM No comments:


Taking a day to chill, back Wednesday.
Posted by Marc Plourde at 12:30 PM No comments:

Friday
Vampirates of Caribdus - Kor
Posted by Marc Plourde at 12:30 PM No comments: