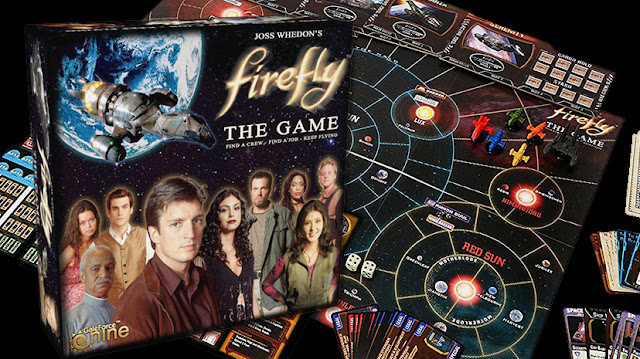 So you and your group aim to misbehave. Maybe you have one of the official RPGs, or maybe you want to use something like Stars Without Number, Cypher System, DCC Star Crawl, or FFG's Star Wars/Genysis system. Regardless you have you choice of rules lined up, you have players making characters, but as GM you have SO. MUCH. WORK.

Unless you happen to also have a copy of Firefly: The Game from Gale Force Nine. No they didn't sponsor this (I actually don't find the board game very playable myself), but I cannot dismiss the utility of this game as a GM's resource. Let's begin shall we?

So there's that big ol' board. The above actually includes the space added by the two big-box expansions, but still you get the drift. Why is this board great? Well firstly it's actually usable. You can lay it on the table and use it during play, everything is nicely legible, and the spaces laid out for the board game work great for semi-abstract RPG travel & navigation. You can use the spaces as a way to gauge distance and time to travel between locations. Each space can represent perhaps a day of travel, with the option to go "full burn" to allow the group to move faster but spend more fuel and run greater risk of running into unintended trouble. 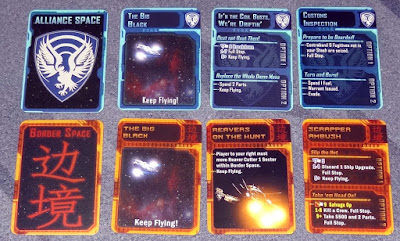 Speaking of traveling, not only are those spaces a nice way to give your players an idea of the time and space required to get from point A to point B, but when you also use the two decks provided in the game (for Alliance Space and Border Space) you can roll cards from the appropriate decks and get ideas for random encounters and events. Consider that these decks contain a lot of "big black" cards (25) indicating no encounter, but a smaller number of cards (15) that yield run ins with Alliance Patrols, Reavers, dead ships, or various problems with your own ship (It's busted cap'n!) and you can see how a GM would be able to draw a card or cards and quickly determine if anything should happen and get some ideas of what.

The cards where something happens also work pretty well to give you some shorthand guidance. Take the "Scrapper Ambush" card, it has two ways to pass it, one requiring a mechanics test, the other requiring a combat test. While the players may think of another way out entirely you can use these as guidance to craft the details of the event. For example, the mechanics test may indicate that the players' ship is either physically held in place, or had been disabled (engine damage perhaps?), if the players are unable to fix the ship they will have to face a boarding party of scrapper and the combat that will almost certainly happen thereafter... 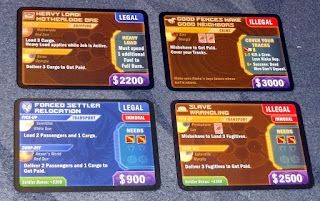 Speaking of stuff to do... a GMs biggest job in a game like this will be coming up with jobs for the PC crew to take on for pay. Luckily there's not just one deck of jobs, but five! Better still each is attached to an in-universe NPC like Badger or Niska or Patience. Some of these jobs will be totally legal. Others decidedly less so. The job cards contain all the info a GM could want; how much does it pay, is it legal or not, where the job starts (e.g. where you pick up goods, or execute a theft) and where the job ends (often another planet thus forcing travel across the 'verse), and any prerequisites for the job, such a a requirement of firepower, mechanical aptitude, or good speechifying. Illegal jobs often also include a number of cards to draw from the "Aim to Misbehave" deck which adds trouble and complications to the job. A GM can easily take this and create a RPG scenario on the fly. And speaking of that "Aim to Misbehave" deck, it's a wonderful resource for injecting a little trouble into the character's lives and make things interesting even when they are not on the job. Each card has a name and three ways to get past the card with two being tests of some kind that can be used to determine skill challenges in your system of choice, and the third an automatic pass if you have the right equipment or NPC ally. 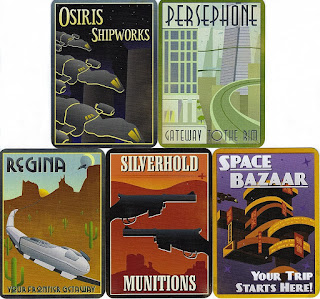 But wait, there's more! Because this little board game has a LOT of cards you also get a deck for every major planet that contains a slew of ready-made(ish) NPCs and gear including both personal equipment as well as ways to upgrade your ship. NPCs come with a name (usually, sometimes it's more of a title), a cost to hire, a couple of skills, and sometimes a unique ability. Fleshing these out into full NPCs may be more work in some systems than others, but I could easily use that card and a choice of level and require no further effort for a Cypher System game. Let's consider that Gun Hand above. He's a mercenary, with a cost of $100, so I could set his level at 1, since he is good with guns I could give him a level 2 for combat tasks, but he's also Expendable, so he gains an ability to be sacrificed to any GM intrusion or similar even if said Intrusion targets a different character.

Likewise equipment and ship upgrades have their cost and their effects in simple terms. Depending on your system of choice this may require more or less effort to flesh out. Again, were I using Cypher for this I could do very easily by converting skill bonuses into either assets or other similar effects. That "A Very Fine Hat" counts as "Fancy Duds" and also makes you a little better at social tests (1 asset), plus it'll open up more options for work when the times come for a new job. Another example (not shown) is "Vera." "Vera" is a sniper rifle (heavy weapon type) with +2 on Firearms and +1 on Speech; easy enough to say that it provides 2 assets on shooting attacks due to its accuracy, and an asset on intimidation checks because its "Vera". Alternately I could say it does +2 damage over a normal heavy weapon, but that doesn't jive with the sniper rifle trait in my mind.

Then there's ship upgrades like that Cry Baby. Cry Baby has a very discrete effect, it let's you escape Alliance Patrols (might also work for Reavers, but maybe not, they are crazy), but you lose it in the process. Still if your hold is full of contraband and your crew has a warrant or three on their heads it may well be worth it to escape Scott-free.

So, hopefully by now you're seeing the potential here. I used to think "gosh, a Firefly game would be so hard to manage" but really it's as simple as a moderately complicated board game. Who knew? Hopefully you do now, and maybe you'll find yourself out in the 'verse the next time the urge hits you.
Posted by Marc Plourde at 12:30 PM 1 comment: