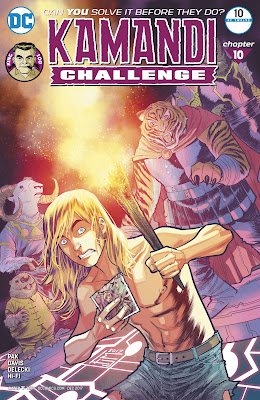 Kamandi Challenge #11 is out today! So let's discuss #10. Spoilers henceforth.


OK, where were we? Oh, right, the room and Kamandi, now alone, when the robot comes for him. It turns out that these robots are cataloging and stuffing the mutant animals of the world. Kamandi grabs a weapon and escapes, stealing a jet ski from another robot and fleeing over the open ocean. Of course this is our opportune moment to get SHARKS. WITH. UZIS! Yes, that's right a gang of punk/biker inspired sharks with uzi's and assault weapons saves Kamandi from the robots giving chase.

Kamandi then washes up on shore of an island with a massive technological tower deep in the jungle. The sharks, unable to go on land, request that Kamandi go there and kill the person who controls the robots trying to wipe out all the animals. With the help of some cat allies Kamandi makes his way to the tower, determined to stop the killing. There he is cornered by still more robots (who are surprisingly weak against gunfire) before he is saved by his battle-armor wearing mother. They quickly catch up and we learn that Kamandi was left in the Command D bunker while his mother and father fought in the "Android Wars."

When Kamandi suggests they hurry before the base's commander finds them we get the reveal and turn that will (I hope) drive the last two issues of the series. Kamadi's mother is the commander, and she fully intended to wipe out the mutant animals from the Earth.

I liked this issue. I didn't love it. It wasn't perfect, but it was good, and I enjoyed the reveal, even though it was hardly a shock considering the battle armor Kamandi's mother was wearing, all jacked up elbow and shoulder plates adorned with spikes. As advancement to the story of the series this is the turning point episode (oh god I hope) where we transition from an episodic romp around the globe in search of Kamandi's parents and the series will (I assume) finish with a pair of more serial stories wherein the very fate of the Earth is at stake.

The art in this issue is good. The action is clear and easy to follow, and the designs are interesting. It's not especially amazing, but it's quite good. The story is a bit drawn out, there's a couple of combats with robots that while they convey how well guarded this facility is. Unfortunately they also draw out the actual story advancement, almost padding out the issue in a not so great way. Overall this is certainly not the high water mark of the last issue, or even some of the first few issues earlier this year, but is is good, and it does introduce the beginning of the end and set the stakes for the last two issues.

Rating: 80% - The end is nigh, and at last we are seeing just what the denouement of this series will look like..
Posted by Marc Plourde at 12:30 PM No comments: