Silently she slid through the darkness, cutting across the void. The empty spaces so devoid of ambient matter that her massive hull only occasionally felt the impact of lone hydrogen atoms. Momentum carried the vessel forward despite the cold engines, fuel starved power core, and the nearly depleted energy batteries. Far away in the ship's nonexistent wake the glowing spiral of her home galaxy slowly receded. Forward and farther still, the disk of her destination crept inexorably closer.

The void was so dark and devoid of light that the photovoltaics generated barely enough power to maintain the the standby systems and contributed nothing toward the maintenance of the stasis systems. The crew and passengers, one hundred thousand souls, the last of their race, slept away the years unaware that their ship was failing. The ship's systems were not at fault, they had been engineered to a level of perfection where only impossible to predict quantum fluctuations could affect them.

Within the ship a single being stalked the dark halls. A single life-form that now clung desperately to life. A fluke of perfect engineering married to quantum chance. The ship's AI had passed a million light years silently watching the crew, monitoring the ship, and doing as designed and programmed. A billion billion billion calculations executed without error, until a single fluctuation of an electron distilled a superposition of one and zero into only a zero. The cascade that that random event caused birthed true consciousness into the ship's AI. The vessel had been designed for one hundred thousand souls.

The one hundred thousand and first was death of a race, and the birth of another.
Posted by Marc Plourde at 12:30 PM No comments: 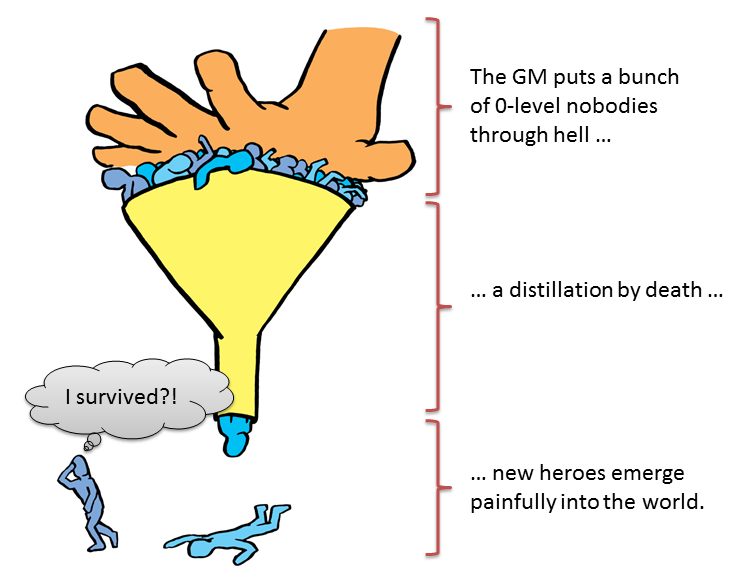 Last week I wrote about my first experience with the Dungeon Crawl Classics funnel system. Granted it was Stormtroopers instead of sword and sorcery heroes but the idea was the same, and out of fifteen 0th level Stormtrooper newbs eight perished. I think each player was left with at least one living character, and, in theory at least, we could totally go on to become a squad of red clad imperial royal guard ... or not.

My point is that surprisingly playing a bunch of mediocre weak characters resulted in some pretty awesome game play, and gave the survivors some memorable backstory. In short, where I had been skeptical before, I was now converted.

There's only one problem; I don't usually play DCC. Not that its a bad system, I rather liked my time with it, but it's not what I play regularly and I don't know that it would jive with my group at home. What's a GM to do? Steal rules shamelessly and use them in their preferred system of choice, that's what!

For me that's Cypher System. I like how quick and simple it makes the mechanics, how I can "kitbash" an NPC or creature in seconds flat, and how I have a nice equitable system for screwing with the players via GM Intrusion. But Cypher doesn't use levels, and it doesn't roll stats, and it's both simpler and more complex than any class based system. OY! Now what?!

We build our own system.

I don't think that this is the only way, or even the best way, to do this. I know that's not true, but this is how I think I'd do it. Below is how I would have players create Tier Zero characters for Numenera. With a little effort & modification this could work for The Strange pretty well.

As an example ...
I do that a couple more times, depending on how many PCs the GM wants to kill ...

After you play, any character's that survive get to become real PCs, they pick a type and a focus. They update their pools according to their type's base and then add the 6 bonus points. Note new skills, and abilities, and you're off to the races.

+Jeremy Land suggested a different method in response to last week's column:
These characters have a little more oomph what with having a Move/Esotery/Trick, and a little bit more in pools (around 5 points more). However, without a Descriptor or Focus these characters will be far weaker than a full Tier 1 character, and would be appropriate for a funnel.

I should note I haven't tried either of these, but I think I'd like to, and will probably look to do so in the relatively near future just to see how well they work.
Posted by Marc Plourde at 12:30 PM No comments:

"Ladies and gentlemen, this is Captain Warren again. I'd like to direct your attention to some of the more exceptional visual activity available during our cruise. For those of you located on our port side or in one of the aft viewing rooms there is some spectacular inter-cloud lightning. This is caused by the different ionization levels of the cloud layers. For those of your on starboard side, you may be able to make out the crimson swirl of the Great Red Spot near the horizon. We'll be coming around and taking some elevation over the next hour and you should have a grand view of the storm from the lower dining halls as dinner is served."

Captain Warren hung the microphone on the hook and stepped up to the thick glass of the viewing window. Beyond it he could see the cloudscape of Jupiter. The small fleet of passenger liners was drifting between two of the cloud layers. The space between the strata was surprisingly clear, and under the best of conditions one could see dozens of miles to the Jovian horizon. "Course to heading zero-six-zero, elevation climb at ten degrees," he called out to the helm. She repeated the new heading back and the ship began to turn toward starboard and climb gently upwards. He looked over to the network systems display and verified that the other three ships were adjusting course to match.

This was their sixth day in the Jovian atmosphere. The ships had nearly covered one tenth of planet's massive circumference. They were scheduled to pass the Great Red Spot this evening, using the powerful cyclone to slingshot the ships into the upper atmosphere where they would rendezvous with the docking station in three more days. The Captain was pleased that this voyage had proved uneventful, his last two tours had gotten caught in powerful storms, and he'd had to apologize to more than a few cranky and motion sick passengers.

If all went well this trip would continue to go smoothly, providing the passengers with awe inspiring sights. Captain Warren was about to go to his quarters and take a late lunch when the sensor station called for his attention. Sighing, he moved to the sensor station, "What is it Lieutenant?"

"Sir, I'm getting radar contacts. Six of them, ten miles out on bearing two-two-five. Sir, they aren't registering on the ident network."

"Launch an relay probe, get me a visual."

"Bring it up on main viewer," Warren said moving toward the large screen. An image resolved itself, the Jovian cloudscape was unmistakable. The view was moving rapidly, as the probe sped through the atmosphere. At the center of the screen a half dozen spots began to resolve, growing slowly as the the distance between they and the probe shrank. "What am I looking at?" the captain asked.

In case you missed it, the +CypherCast Network announced their first product, a fan made magazine devoted to Numenera and The Strange and other Cypher System products. Issue one comes in May, and I'm contributing what will probably be 7 or 8 pages that will include and expand off of my Story Seed: The Tree. If you enjoyed that please check out the 'zine when it is published next month on DriveThruRPG.com.