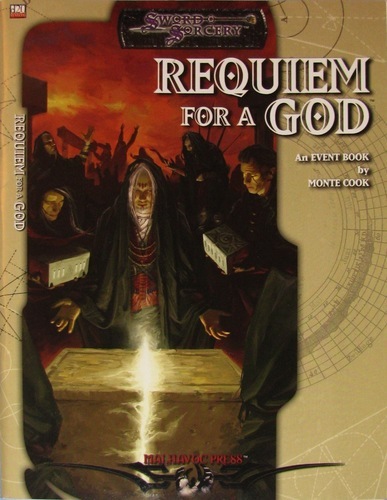 I know I claimed this would be a semi-regular thing, and in the long term it will be, but for now I have a lot of stuff from the bin I can speak to...

After picking up and reading When the Sky Falls I found myself really interested in seeing what the other event books contained. Requiem for a God seemed likely to be the better of the remaining two. Not that Cry Havoc doesn't have potential, but from what the DriveThru page for it says I think I'd get a lot less out of it. At any rate, Requiem for a God is the kind of RPG supplement that I really enjoy. It's full of possibility, and has a sense of scale that you don't often see in RPGs. After all, how often do you get to kill a god?

As with When the Sky Falls this book is built to be useful to the GM as a resource for a setting altering event. It's not an adventure, but it has a handful of ideas at the end of the book for various levels. The first chapter covers bunch of options for just how to kill a god, what god should die, multiple god deaths, and the like. It prepares you for the event by asking you the important up front questions.

The second chapter is what I'd call the meat of the book. Basically a full third of book, chapter two is dedicated to the aftereffects of a divine death. The repercussions of a dead god are considerable: de-powered clerics, the appearance of mystical materials like godsblood and godflesh, and even the effects of all that divine power that is no longer contained. It also contains some groups, the reactions of other divinities, and how a gods death will impact society. There's a lot here, and much of this is stat free, and what little else is fairly stat lite. Either way, it's easy to use this in most any game system.

The remaining book has a lot of d20 materials like feats, spells, prestige classes, monsters, and items. For people, like myself, who use other game systems these can serve as good sources for inspiration, or even for conversion materials with some effort. Take the Cypher System for instance; Creatures convert easily enough with just a level, Items make easy Artifacts with the addition of a depletion roll, and spells and feats can inspire new Cyphers, or even new Type or Focus abilities.

Of course, if I'm going to use this in a game I either need to build a setting to use it with, or fit it into an existing setting. Numenera could work. Some reinterpretation would be needed. The "god" to die could be a god of the datasphere for instance, its physical remains are less godflesh, and more the circuits and cyphers of its broken central processing unit. The shift in the datasphere would need to be played up by the GM and in general this would work best if the datasphere was already a major part of your game.

Maybe The Strange is more your speed. Requiem for a God could be the basis for an entire campaign set in the deep past of Ardeyn when the Maker was betrayed and slain! The loss of "clerical" powers could explain the way the angelic quephilim of old lost their divinity and became those we know in the modern age. In the wake of the Maker's death the heroes would need to stop the Betrayer from waking Lotan and help to shape the world that Ardeyn will become.

There's more though. Combining Requiem for a God with When the Sky Falls is also an option, you could use this on a smaller scale during a "war in heaven" type event where angels perish and fall to the earth wreaking havoc on the mortal plane, and spreading unconstrained divinity. Or you could go big. Like really big. Think Ragnarok. Or better yet, think Gods of the Fall, which suddenly comes into a whole new focus with the understanding that the same creators involved with these two event books are at the center of the newest Cypher System setting. I think both of these books will prove immensely useful when Gods of the Fall drops in a few months, with ideas for postmortem divinity, and the aftereffects of supernatural meteors like the broken shards of heaven itself.

I grabbed this from a vendor on Amazon for less than $10. If you think this is something you want to check out, find it in your local bin, or grab a copy from Amazon, ebay, or DriveThruRPG.
Posted by Marc Plourde at 12:30 PM No comments:


Depending on the RPG you play some may require you to align yourself with some kind of system to broadly (or narrowly) define your character's outlook on morality. This goes back to the the 3x3 Law/Chaos/Good/Evil Alignment matrix and filters up through to more modern approaches that include motivation systems, morality paths, and even simple linear alignment spectrums. Other games have systems that balance power and a character's inherent humanity, or balance two sides of a character like the internal beast and the civilized human. Still others balance sanity and madness.  All have in common some degree of intent behind the way the character acts.

Is there any value in these behavior systems? I think it depends heavily on the game, and obviously some games have jettisoned these concepts entirely, and and none the worse for it.

Some of the dungeon crawler games hold onto alignment, either the aforementioned classic 3x3 array, or a simpler Law-Neutral-Chaos linear scale. While these games often have some mechanics that interact with alignment, including magic weapons, clerical or divine abilities, and similar, outside of these effects alignment is little more than a vestigial trait with only the most tenuous of ties to game play.

Conversely are games where morality is tied heavily to the game intent. Fantasy Flight's Force and Destiny tracks morality as a "good vs evil" or "light vs dark" balance. Actions that tap the dark side slide the character further toward one end of the spectrum, and holding to the virtues of the light side elevate the character toward being a paragon of "good." Force sensitive characters must find their place between the light and dark sides of the Force whether that this fully embracing one side to the exclusion of the other, or trying to balance the two in a "grey Force" technique.

Meanwhile, White Wolf and Onyx Path have made it their signature to have games that balance characters along a path of morality or one where humanity lies on one end of the spectrum and the character's monstrous/supernatural self lies at the opposite end. This monstrous nature is often a balance between the instincts of the monster/supernatural self, and their own core beliefs. A character closer to the vampire end of their moral spectrum ceases to see the drinking of blood (and possibly the taking of life to feed their thirst) as "evil" and instead understands it as a case of their nature. The vampire can struggle to retain their humanity (and often hamper themselves in some way) or can embrace some degree of their supernatural nature as "natural."

But do morality & behaviour systems improve our games? Like a lot of things I think there's a place for these in some instances and not in others. Fantasy Flight wisely chose to not have Light and Dark side morality in their Edge of the Empire and Age of Rebellion games. Since Force users in those games were only a minor aspect of the whole, a mechanic like morality would have been out of place. For Force & Destiny however it is an integral piece of stories that focus around Force users, and the mechanics add to that part of the game rather than detract.

Likewise, where one game of playing a once-human monster like a werewolf or human may revel in the power of the supernatural, another may instead choose to dwell in tales of lost humanity caused by the corruption by the supernatural. In the former case a behavior system (be it morality, humanity, or something else like "balance") would likely get in the way of having that power trip of playing a monstrous character. In the latter where the temptation of supernatural power balances against the loss of humanity from the corruption that power brings may feel lacking without a behavior system.

What about Madness and Sanity? These balance against each other but unlike many of the examples above madness is often foisted upon a character; an imposed condition caused by outside forces. Instead of an internal struggle determined by the choices of your character madness and sanity are an external struggle of the self versus a universe that threatens to drive the self mad. Games set within the Cthulhu Mythos would hardly be the same without rules for madness and insanity.

All of these systems will drive players to play their characters in certain ways, ways that may well change over time. Some at the choice of the player, and others as a result of forces beyond their control. In the end a behavior system needs to fit the game, and fit the players and GM. Like many things agreement by all involved and a clear understanding of what goals the GM has in mind for the game can help to ensure that these kinds of things fit within the game and fit within the expectations of all involved.
Posted by Marc Plourde at 12:30 PM No comments:


Jallu looked up through the great dome. The starry black field of space expanded outwards in all directions, broken only by the bright light of the sun and the far larger mottled orb of the planet below. The great engines smouldered on that world, leaving glowing blemishes on the night side of the world. The engines did the work of reclaiming and reformatting the environment. Jallu peered through the telescope and could see the great shimmering clouds of nano-swarms wending their way over the surface.

Th none knew for sure if this world had once been a garden like the Homeworld. With time and patience it would become one however. The comets and meteors had seeded the world with the materials the nano swarms and engines needed to built artificial gravity wells and a new atmosphere. Once it was ready for life the world would be seeded again, with bacteria and plants and insects. The world would flourish like a fertilized garden until it was ready for higher life. And in time the garden would be like a second Homeworld, and Jallu's people would claim it as their home.

Jallo wondered if he would live to see it. His father was the Overseer, and the position was his in turn. Estimates suggested that Jallu might well be alive, an ancient living his last years, and his grandson the Overseer, when at last the world was ready. Still, on nights like these he enjoyed looking up at the world to be.
Posted by Marc Plourde at 12:30 PM No comments:

Tuesday
Tuesday Tools - It Came From the (MCG) Blog!

Friday
Second Hand Treasures - Edge of the Empire
Posted by Marc Plourde at 12:30 PM No comments: