So, previously I've discussed my thoughts on the "c" and my opinion of the cause of time travel failure and, by extension, the time anomalies found in Grevakc. Those time anomalies though, I haven't said much about them. Till now...

Firstly, there's not much information in the book. The game isn't about Time Travel after all. The time travel created the universe but that's not what the game is about. As such we're pretty much limited to whatever we decide for ourselves and the information on page 74, under climate and weather.


[...] glitches in the landscape, places where the edges don’t line up. Occasionally, they seem to look like a mirage, the flickering image of a place or structure that doesn’t belong. (Predation, pg 74)

People in Grevakc hunt these anomalies down because with them come cyphers, and rarely artifacts and remnants. I like to think of the latter two as the detritus of a paradox destroyed future timeline, the world to which the time bridge (for lack of a better term) once connected and the characters' ancestors originated.

To me this adds an interesting layer to the game with a touch of post-apocalypse scavenging the remains of the old world. These items come from a dead world; a time that was once future, but is now no longer anything more than a fragment causing paradox effects as the new timeline continues forward. I also view these pieces of the timeline that was, and possibly the future that was, as "temporally stable" items. Things that were real enough by some virtue to survive the paradox.

Cyphers on the other hand are more ephemeral and also more indicative of the temporal paradox that is Grevakc. These unnatural powers that somehow encode into human DNA are perhaps holdovers from genetic lines that have been wiped out. Or perhaps they are simply bits on another reality crystallized into "time bombs" usable by those who find them. Perhaps the nature of cyphers is even tied to whatever enabled the paradox to occur in the first place.

Time terrors are weird. They are described like some kind of pop-up thunderstorm on steroids, a force to be reckoned with that causes ball lightning to be flung around, temperatures to rise or drop rapidly, and high winds. Time terrors are described as being extremely deadly, with few people having managed to escape getting stuck in one.

In the wake of time terrors anomalies are more likely to be found, and some even believe that there may be a cause-effect relationship. Furthermore in some instances observers outside of a terror have noted seeing strange discontinuous landscape-like mirages. I like to that that if anomalies are the result of the timeline crushing paradox that broke contact between Grevakc and the future, then time terrors are actual active paradox.

Consider how tectonic plates pushing against each other cause earthquakes when the force built up exceeds the friction between plates and causes slippage. In this case the plates are the original timeline and the new Grevakcian timeline, the paradox of humans existing in the Cretaceous who originate from a future that can no longer exist is causing "pressure" between the timelines. As the new timeline overwrites the old there are slippages that result in massive "time quakes" which the characters perceive as time terrors.

In this is the paradigm then it also means that time anomalies can be looked at as aftershocks; smaller less damaging paradox effects. It also implies that the mirages may in fact be actual views of the dying timeline. It could even be possible to use a time terror to travel through to the other timeline (though that may be a fatally poor choice).
Posted by Marc Plourde at 12:30 PM No comments:

Editor's Note, given the product title I'm not going to bother censoring myself this week.

So, earlier this year I had a moment of realization. I came to see that while I'd been ignoring the written adventures of both yore and today I'd been missing out on learning design from other people's effort. It's not that I can't run a game, or write an adventure for myself, but going through the process of writing one for other people made me realize where I tended to say "fuck it" and just improvise. Not a bad thing, but not a great thing for published product.

So I've been looking at various bits of advice in this regard. The latest of which is "Adventure Writing Like A Fucking Boss" which is a title that really says something about the confidence level of the author...

Advice that strips out most of the bullshit. Seriously, there's very little pretension here, which is a good thing. Hell, it's probably the best part of this product that it doesn't treat itself as being too far "above the reader." In what amounts to about 9 pages of text if you strip out the art, cover, and credits the author lays down the foundations of adventure writing. As a GM for decades there's not a lot here that's "new to me" but it's refreshing to see it all laid out and bare.

The content is broken out into fifteen sections ranging from about 3 paragraphs to a dozen or so. The author starts off by detailing why you may want to write your own adventures. OK, fair enough, but probably anybody who has gotten this far already made that choice. It then goes into the idea of the elevator pitch as a metric for good and bad ideas. This is pretty reasonable, if you cannot sum up an idea into 2-3 interesting sentences it's probably not an idea that will yield an interesting adventure. Or it's too much, and you need to consider breaking it up into smaller parts; perhaps your epic idea can become fodder for a series of adventures instead. From there we get some advice on finding your own writing style and trying to make the best of it. There are some words of wisdom here in regards to over-writing.

Next we get a discussion of the adventure rails. Ah, to railroad, or not to railroad, that is the question! Actually, no, screw that, NEVER railroad. But, to the author's point, knowing when to toss in "guardrails" to keep the adventure from going entirely ... ahem ... "off the rails" ... is wise. Players are ... unpredictable creatures, and having mitigating factors in place to help keep the session from going bananas is good. Most GMs simply cannot keep up improvising after a certain point without abandoning the original adventure, which sucks.

At this point we're on page four and getting into the meat. First we get "Anatomy of an Adventure" breaking down the basic (and classic) structure for storytelling. Then the author dives into scenes and starts discussing each component therein. The fact that adventures and scenes have the same basic structure is makes this all the more valuable.

From here out the product fires on all cylinders for me, right up until the last section, which just didn't float for me, but hey, that's cool, it's only one page. The writing keeps being punchy and direct, and breaks down how to build a scene up without getting overwrought. It's presents the idea of a "Trailer Test" to help prune scenes much in the way the Elevator Pitch helps prune out bad adventure ideas. This is just the fractal nature of things in my opinion.

After scenes we get a quick hit of the three most basic aspects of gaming (and storytelling) and how these should all be present in some form to make for a good session. Lastly there is some advice for "moments" or interludes, the stuff between scenes that adds color, as well as the idea of callbacks.

I'd say that if you're new to GMing, and new to writing up your own adventures this is a pretty damn good purchase for $3. If you've been at it a while it may make for a nice refresher course, and the clean and bullshit free presentation of the writing does help make this a nice reference or refresher. Will this make you a "fucking boss" at adventure writing? I'm not sure about that, but it sure as shit will help prevent you from making an ass of yourself. There's plenty more to writing good adventures than structure, but if you don't have good "bones" the flesh won't matter for shit.

Score: 85% - Pretty good for those wanting a refresher course or those who are new to adventure writing. Maybe not what you're looking for if you've been GMing for a while.
Posted by Marc Plourde at 12:30 PM No comments: 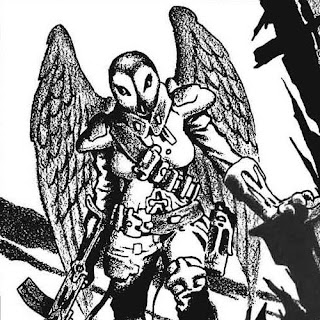 Friday
Gods of the Fall - Session Prep - Finding the Way