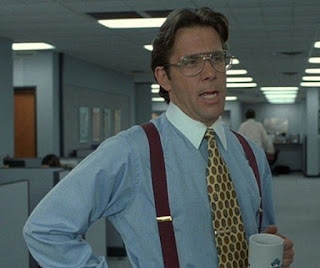 So, last week over on his blog Andrew posited some ideas for GMs looking into introduce a big bad and enable their escape from the players. (you'll want to read that on first, go on, I'll wait). We've been having sort of semi-related back and forth but I'm going to do a direct rebuttal this time as I think some of Andrew's ideas are great but I don't agree with others.

To set some ground rules:

The players have finally made their way into the Throne Room\Lair\Laboratory\Warren of a Big Baddy. On the Baddies home turf, the heroes are in for a fight.

So Andrew posits the scene as the villain's lair, and that's totally appropriate, but so too are situations in the world at large. The villain should be just as able to flee the burning of a village or the arcane destruction of a city (scale as appropriate to the villain). Why is this relevant? Because I think the first intro to the villain should be in the world and not in their lair most times. If you introduce them as "just another bad guy" their eventual escape and return can build up their rep with the party directly rather than building the hype indirectly leading up to the first meeting. This is probably just a style thing, but it bears mentioning.

The mood of these fights should always be a little tense, for you and the players.  For you never want to create an encounter like this that is a pushover for the players, nor should you want a TPK.

I pretty much agree wholeheartedly here when the players already know the bad guy is he villain. When they don't yet know that however, you can easily mood shift into either horror or terror if the villain is more powerful than the PCs. Consider a powerful necromancer who is slaughtering a town and using the corpses and souls to build a) an undead army, 2) a grotesque abomination of flesh, 3) a portal to realms beyond. At this stage the villain is so powerful that he can brush off the PCs as an annoyance, and his "escape" is instead played out after he completes his task and has no further need to stay. The PCs now have a long term goal to find a way to defeat this evil!

Alternately you could pose the scene heroic for the PCs and run the villain's escape as a victory for the players instead of a soft loss. The PCs drive off the warlord and his marauders saving the village, but now he has a score to settle with them later! This flips the script a bit and let's the next encounter be at the villain's impetus.

Regardless of how you parse the scene you do need to be prepared for the dice to turn things away from your intent. I suggest running things outside of strict "combat mechanics" if possible to allow you more leeway to set the long term story but still take account for player actions and avoid laying down rails.

The Big Bad is a threat, but for the first meeting, they should not be fighting alone.

One word: Dragon. Sure a warlord should have an army, and a mage will likely have summons of some flavor, but what about something so beyond the player's current capabilities that it needs no help. A dragon would not stoop to having minions, it can raze a town and carry off the virgins by itself thanks very much. Granted lieutenants and flunkies can certainly give the players opportunities to get their fight on while the big bad gets away, but that doesn't work for every villain. Sometimes a single creature can, with multiple attacks and/or area effect powers, present not just a challenge but an overwhelming threat all on their own.

Summons & minions can make great diversions however, as can unleashed beasts/monsters. But so too can out of control fires, frozen or buried townsfolk, and other non-monster/NPC threats. Such cases give you a great chance to leverage player alignment, reputation, motivation, and the like to drive the characters to let the villain escape while they rescue innocents, or prevent the destruction of a sacred site, important artifact, or similar. Also consider than spells like Banishment can work against the players and flip the script on "escapes."

If the Big Bad has their own way instantly get away, via magic item or special ability, make sure the players know about it beforehand.

I actually don't agree here. Especially if your intent is to allow the villain to escape. The reveal of this power should be a major pain point for the characters, and should drive them to find a way to shut it down prior to their next encounter. This drives engagement and drives story progression. If the players are mad about the villain teleporting away they will have the characters drive the story to find a solution for said boss ability. This is a good thing in my mind.


Other than Special Powers or Items, make sure the description of the room describes the ways of egress from the room.

This I agree with. Describe your scene well. This engages the players, and obvious things like teleport circles, summoning circles, arcane doorways, astral rifts, ad nauseam are all things the players should know about. The ability to cast Teleport, or having a Wand of Plane shift, are both things that the players probably will only know about after one or more encounters with the boss, so depending on the characters' history with the villain you may need to keep some of this hidden. Let me repeat that: You are not beholden to telling the characters about all the big bad's abilities!

I’ve thrown in tips throughout this whole article, but the biggest tip I can give is don’t force the escape. Players are crafty and they may have come up with a plan that nullifies the big bad’s escape plan, or the rolls swing the wrong way and they have the big bad dead to rights. Let it happen. Lose the Big Bad.

I agree with this entirely. No plan survives contact with the players. An anti-magic artifact, a counterspell, or clever application of any number of crazy player ideas can foil the mechanism by which you had planned for the villain to escape. I agree with Andrew and suggest you let it happen. The key then is to have a backup plan. Consider the following:


Closing Thoughts
Do plan devious ways for enemies to escape, especially those you have hopes of becoming on-going foils for the PCs. Do allow the PCs to find out ways to foil the enemy powers they know about, but also do give the villains nasty new tricks. Don't shy away from the "untimely" death of the villain; the PCs earned it, and you CAN come up with better stories afterward. Do have backup plans for when the villain bites it.

Also have fun, maybe the villain was actually a tiny alien in a robot, or a demon that possesses bodies who can survive being slain, just remember to drop hints so the return of a dead antagonist isn't just you being crappy.
Posted by Marc Plourde at 12:30 PM 2 comments: