Gods of the Fall - Some Thoughts on Ravers


I'll be honest, I don't get what Ravers are supposed to be. The book says they are formed/born from the remains of a slain god and are motivated to corruption and murder. But what specifically is a Raver and why do they behave the way they do? Are they some sort of shattered fragment of the god's psyche, driven insane in death? Are they just mindless portions of divine energy given form within the rotting fragment of a dead god's body?

Let's break it down and see if we can learn anything...


So yeah ... pretty sure the first definition need not apply here. Then again maybe Nulumriel throws some bitchin' parties... digressing ...

A person who talks wildly or incoherently, as if delirious or insane. OK, now we're getting somewhere. So we can assume that Ravers are meant to be wild, incoherent, delirious, and/or insane. Broadly speaking I think we can assume that the intent is to have an unpredictable, and incomprehensible enemy fueled by divine power and formed from dead gods. So, insofar as trying to discern why a raver acts the way it acts we're left, as players to scratch our heads and hope to figure it out if we're lucky. As GMs, this signals to me that we can assign whatever reasoning we desire to the actions and motives of the bizarre creatures.

I could see Ravers as trying to accomplish some aspect of the dead god's own domain responsibilities but with just a shattered and fractured portion of that god's essence they do so in strange and twisted ways. As an example The Skin was once part of a god who judged a soul's goodness and worth. In some strange way this creature now berates and demeans the souls in its domain perhaps because it is only capable of seeing the unworthy aspects of a soul and calling those out.

Physically ravers don't seem to have any direct correspondence to the portion of godly flesh they inhabit. Given the behaviour of The Skin one might expect it to take the form of the god's tongue or lips, instead it's skin. Again, given the shattered and incoherent aspects of the creatures this isn't entirely unreasonable. Divine power courses through these creatures, and should be capable of many things. A Raver formed from a godly eye may well seek to continue working a divine craft, using optic nerves as tendrils to beat and form "raw materials" (e.g. people) into "divine wonders" (e.g. icky messes or monsters).

I think I'll need to spend still more time thinking how best to use Ravers in any future games I run, but I like the potential. For instance I especially like the thought that a godling who shares the same domain as the god from which the Raver spawned might be able to slay a Raver and gain from its freed divine essence their first divine shift(s).

How about you? How do you see Ravers in Gods of the Fall? Do you have any cool plans to use them in your games?
Posted by Marc Plourde at 12:30 PM No comments:

On the odd chance that you are unaware of the current Mutant Crawl Classics (MCC) Kickstarter from Goodman Games it's a game based on their very successful Dungeon Crawl Classics (DCC) game mechanics but this time taking a OSR look at the post-apocalypse genre a la Gamma World. I happen to like DCC quite a bit thanks to my good friend +James Walls and I'm rather looking forward to MCC.

But why am I backing?

Well that's complicated to answer. I love post-apocalypse as a genre, and while I have never once played Gamma World I have played another old pedigree post-apocalypse game rather extensively. 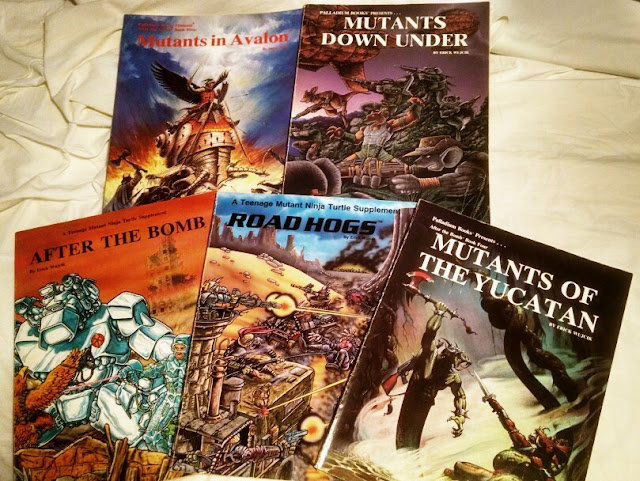 Oh yes, After the Bomb, Palladium Books' licence free spin off from their TMNT & Other Strangeness. Take a look at those five covers. Aside from the humans in power armor fighting mutant animals in the After the Bomb "core" book (really just a setting spin that used TMNT & Other Strangeness as its core rules) mutant animals are the core concept of the game. Guess what MCC has? MANIMALS! Yep, I'm getting MCC ... 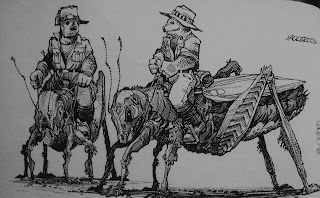 I mean seriously, look at those covers, look at some of this art, mutant animals going all Mad Max? Check, Road Hogs does that (and yes, the Road Hogs were a motor gang of mutant pigs). Deep jungle survival struggles amid the ruins of pre-war tourism? Check out Mutants of the Yucatan (one of my all time fav covers. A long simmering cold war in the hot outback of Aussieland (Australia) where the bio-diversity of the continent has gone kinda bonkers? Mutants Down Under! Or perhaps you want a quasi-medieval, semi-fantasy take on Arthurian Legend using mutant animals riding around on giant snails (does +Darcy Ross know about this one?). Look no further than Mutants in Avalon! 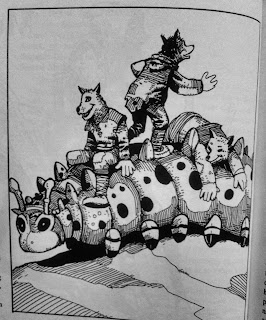 I know there's going to be a lot more going on under the hood of Mutant Crawl Classics than just manimals and the ruins of the old world, but honestly I'm just looking forward to being able to haul out these old books to play in post-war America again. 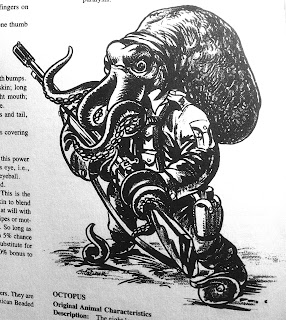 Email ThisBlogThis!Share to TwitterShare to FacebookShare to Pinterest
Labels: After the Bomb, DCC, MCC, Nuts & Bolts


My lungs burned. Oh, how they burned, but I kept putting one foot ahead of the next. I forced myself forward, step by step, as the winds buffeted me. Onwards and upwards the stair went, and I began to wonder just what I would find.

I stopped for rest, for meals, for ... less conversational needs. The path before was was arrow straight and always climbing into the sky. After a day I was breathing hard amid the clouds; I could almost imagine that I was flying. After two days I was gasping for air, slowed to a figurative crawl by the environment and my body's inability to adapt. On the third day I was literally crawling; forcing myself ever onward, hand over hand. Each stair bringing me closer to the top. Each stair taking me farther from the earth below and the ruin there.

I put my hand blindly before me and instead of another stair it found nothing. I raised tiredly my head, the stairs had ended. I pulled myself up until I could see forward. Before me a long walkway led to still more stairs and finally a great structure. I heaved a ragged breath and redoubled my efforts to move forward.

The structure was a great gate, and beyond that was ... Was nothing. Open air, and a precipitous fall to the clouds and the world below. It was true, Elanetar had fallen. The gods were gone. I rolled to my back right there in the gate and stared at the dark blue sky above. I felt the last shattered remnants of my hope crumble away as I wept for the world in that cold thin air.
Posted by Marc Plourde at 12:30 PM No comments:

Friday
Year of the Demon Lord - This is No Cave


Have you heard about this little game called Gods of the Fall? I mentioned it a couple weeks ago when I discussed my early opinions. Well if you like the Cypher System and want to know more you may consider keeping the evening of Sunday, July 17th open. +James Walls +Ryan Chaddock and I will be spending an hour discussing Gods of the Fall on CypherLive!