Gods of the Fall - Some Thoughts on House Rules 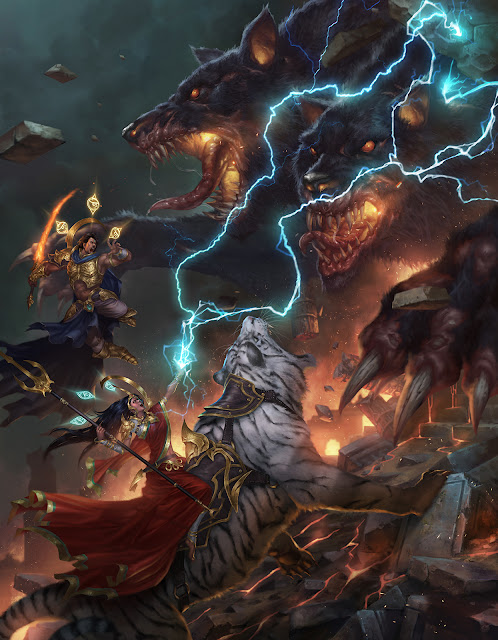 The game's been out for a bit now, and I've been on both sides of the table. As a player I tend to be accommodating to the GM, as a GM I tend to limit my house rules as much as possible to only those situations that will enhance the game or make my life easier. With all that in mind a have a few ideas of how I plan to do things in Gods of the Fall.

I used this in the play test I ran last week for "Thirst" the adventure I am writing for the CypherCaster and I think it worked well. It's less a rule and more a guideline or perhaps a "visual standard." Basically while a divine's aura is normally only visible to other divines (unless they choose to make it so) whenever these divines use an ability or power of their's (especially those linked to their domain) their aura will briefly flare and display itself for all to see. This helps to make the use of abilities a more dramatic and helps to reinforce the epic nature of the game. This was inspired by similar features in Exalted and Scion from White Wolf.

Because it didn't matter for the playtest I didn't offer it as an option but I would consider allowing players to hide this flare by expending a level of effort or raising the difficulty of the roll by 1 level when they were in a situation where the difference between displaying a divine power and an (apparent) sorcerous power would be beneficial on the character (for instance while operating in Corso).

I'm on the record (somewhere) as a GM who separates advancement XP and GM Intrusion XP at the table. I have found that there are some players who will hoard XP and suck up whatever misfortune goes their way to advance more quickly and others who will bankrupt themselves for a chance to re-roll at any time. I know that that is player prerogative, but I find that when you have players who begin to slip forward or backward more than a couple of advancements things can get a little weird, and given the nature of the characters and the swinginess that can be present in Gods of the Fall because of divine shifts (more on that in a future post) I am simply going to go one step farther (further? I never get those right) and do away with advancement experience entirely.

Instead I am going to take a cue from Shadow of the Demon Lord and simply dole out advancements at the end of adventures and story arcs as rewards directly. I'll still use normal XP rules for GM Intrusions and those can be used for Immediate, Short, Medium, and Long term awards normally. I'm just going to do away with any kind of end of sessions XP in favor of directly awarding advancements.

This is less of an house rule and more of an explicit allowance of an uncommonly used optional rule (at least in my experiences). Basically I plan to make it known that players are both welcome and encouraged to use the "Modifying Abilities on the Fly" rules from the CSR (pg 226) so long as the modified effect falls within their Dominion. I'm not going to allow a God of Death to try and modify a fire blast into flight very willingly, but if they want to use the same fire blast to "soul burn" (and bypass armor in the process) I'd be much more receptive. The way I see it, the gods are masters of their domain (*ahem* Seinfeld references notwithstanding) and should be able to perform stunts and epic style feats within that domain's purview.

What house "rules" do you think you may use for Gods of the Fall to help set the tone and scope of your games?
Posted by Marc Plourde at 12:30 PM No comments:


Author's note: This is written as a Gods of the Fall piece, but I fully expect that people will be hacking the dominion rules in due time for other game uses, therefore this is presented as a "Hacking the Cypher System" article.

Most every divine creature or being can recognize other divine creatures (and sometimes objects) by the presence of their divine aura. Normally invisible to mortals this aura is always visible to other creatures imbued with divine energy. This ensures that divine recognize divine and creates a means for creatures and characters to come into conflict or recognize artifacts and allies.

This naturally relies on sight or perhaps some kind of divine sense that most perceive as sight since Tarans are blind and yet are not mentioned as being unable to perceive divine auras. Given the controversial nature of the divine in the Afterworld it would seem that even among other divine beings some might wish to go unnoticed. It's probably not an easy task learning to hide one's aura, but doing so may well be worthwhile for some gods to be looking to avoid trouble with the Reconciliators and Nulumriel

The character completely divests their divine nature for a time, during which any attempt to perceive their divine aura will automatically fail and the character will appear as a normal mortal. While so divested the character also loses access to all other Dominion Abilities and all of their Divine Shifts; for all intents and purposes they are mortal for as long as they choose to be so. 10 actions to initiate. 1 action per tier to deactivate.

Of course while some gods are developing ways to hide themselves even from other divines others understand that restoring Elanehtar is not a one-deity job. Instead they work on expanding their ability to discern other divines and divinely touched objects and seek them out. For some this may come in the form of seeing trailing wisps of divine auras, for others it may involve literally scenting out divines, while others may hear phantom sounds that others cannot.

The character's perceptions of divinity expand and allow other senses to detect traces of divinity. A divine creature or object will leave a trail of residue of their divine aura that the character can track. Tracking a divine aura is a level 4 task, increasing the older the trail is. Residue of a divine aura will fade after about one week. Action, to initiate, duration of 1 hour.

In addition studying the divine aura of a creature or object can reveal information like dominion, presence and type of divine shifts, and if their fate has been tied to another in the form of a pantheon or prophecy. Such discernment is a task equal to the level of the creature or object or the tier of the player character for most information. Action.

Those are just a couple of ideas for new dominion style abilities. Let me know if you like them and use them. If you have ideas of your own I'd love to hear them.
Posted by Marc Plourde at 12:30 PM No comments:

The Verge is a strange place. Not as damaged and twisted by the Fall as the Ruinscape, nor as dark and corrupted by Nulumriel as the Nightlands. The Verge instead seems merely old. Forgotten. It has been less than fifty years since Elanehtar fell and yet there are ruins here that date back hundreds or thousands of years. As I venture further toward the edges of the map I once again wonder what I will find. Will this curse of divinity follow me, or in fleeing from the shattered and spoiled lands I once called home will I escape the realms of the gods whose power now taints my soul?

When I first set out the Krakens seemed to extend ever onward to the west and north, now I have found the worn and tired foothills that signify their end. In these rolling lands I have found only cold desolation until today. A ruined city, surely once mighty and glorious, now stands silent and abandoned like some mausoleum or tomb. Wonders of some prior age or lost gods still hand overhead, or dwell in lights that burn without flame.

Four days. I've been trying to leave this forgotten ruin for four days, and no matter the path, no matter how I try to avoid it I keep ending up at the winged and broken spire. I'm unsure how, or why. I must be cursed. The divinity inside of me acting as a tether to this place. Or perhaps a divine curse by some long dead and forgotten god. Or maybe it's destiny. I don't know, but I fear that my end may come from it.

If somebody finds this please know I tried to avoid it. I didn't want this spark of power. I found a door, a portal, and I am hoping that it leads to salvation and not damnation.
Posted by Marc Plourde at 12:30 PM No comments:

Friday
Gods of the Fall - Descending to Soulrest


Did you watch CypherLive last Sunday? Did you catch it on YouTube during the week? Well if you answered no to both you can check it out above.  +James Walls +Ryan Chaddock and I spent an hour discussing Gods of the Fall and answering questions and I think we could have gone on for another hour!