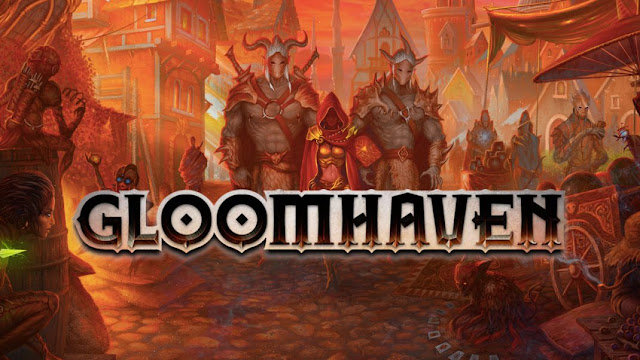 Four years ago I wrote a blog post about harvesting the boards from your board games for use with your RPGs (find it here; TLDR: you probably already have a closet full of RPG ready maps). Board gaming is a big part of my hobby time as I have gotten older. It's easy to do a board game regardless of who can show up, but RPG sessions often require all players be present (especially when your group is small, as mine is). We play a lot of games from the super lite, 20 minute games, to heavier games like Terraforming Mars, Orleans, Firefly: The Game, and probably the heaviest game that makes frequent rotation: Gloomhaven.

Thing is that while some of these are very "board gamey" others like Gloomhaven, and Firefly have very RPG-like choices to be made and mechanics that would not be otherwise out of place in an RPG. Do you sell the mercenary a healing potion as he asked, or choose not to and risk his ire? Do you take on a job ferrying slaves and risk pissing off your crew during the trip to the next system? These are very RPG-like choices. Playing these games has got me thinking about how board games have clearly been inspired by RPGs and how RPGs can be inspired right back by board games.

All of that said, let's talk about Gloomhaven, the very much an "RPG in a box" board game, that manages to evoke a lot of RPG like decision making and interactions despite its utter lack of a GM to tailor things to the group.

So, first of all, let's talk goals. When you make a character in Gloomhaven you get two cards of the goals deck and choose one. These cards give you a bit of character background and set up what your character's personal goal is as well as the reward for meeting that goal. The character who meets that goal will thereafter retire. These can be a simple as "defeat X number of [monster type]" or "complete X number of encounters while [condition]". In addition to these, each character will also get a short term goal for each encounter/mission. Things like "end with your maximum health," "only take short rests," or "don't use any equipment." These short term goals act as a way to, essentially, gain experience to unlock perks (Gloomhaven actually has two independent advancement tracks, but more on that later).

At first glance these may seem like board gamey ways to "gamify" the process of unlocking additional content from the box (which it is) and/or improving your character, but surprisingly a lot of role play happens around these goals. When a character is one kill from their goal and that enemy is downed by another character in search of their own goals the talk at the table gets pretty interesting (I needed to hit my short term goal dang it!).

There's value here, especially in a hobby that often loses itself in the theoretical "endlessness" of the game. Yes, you the player may want to keep adventuring, but would that character actually keep going after everything they've been through? I know my decision to retire a character at only level 3 in a Dungeon Crawl Classics game struck some of the other players as odd, but he had modest wealth and was the newly elected mayor of the town, adventuring didn't feel like a choice the character would make. Better still that choice resulted in the character becoming the "god emperor" so I think it was a good one.

Retirement of characters does mean that your cast changes. Rather than looking at that as an bad thing, consider the opportunity that this presents. With the removal of a given character and the introduction of a new character the roles and skill sets that that character filled will likely change. This opens up an opportunity for existing characters to explore aspects of their character outside of their existing niche. This means that a character may be able to step up into the role of tank, or healer, or utility character. It's also possible that the entire party dynamic may change. If your wizard retires and the player brings in a rogue as their next character the way the party approaches combat and exploration is not only likely to change, but is likely to NEED to change.

Certain RPGs really make it hard for a character to die and therefore make it easy to keep playing the same character. Worse, I have seen a lot of "I only play X" and "this is a version of my old character [name]". While I can understand that there is comfort in the familiar I also think a lot of folks are missing out on trying new things. A rolling roster can help motivate the players to try new things; after all, if it doesn't work out that character can just be retired.

OK, fair to say that I didn't learn this from Gloomhaven specifically, but Gloomhaven does do a very good job of this, and has driven a lot of RPG-like talk at the table. So Gloomhaven has a track for how prosperous the city is, another for the reputation of the player party (which can fall below zero because the game knows that people can be a-holes), and all of this had an impact on play as both the player party wields influence and the city wields influence on various encounters. The most obvious way this is felt is that Prosperity influences the starting level of new characters. A fantastic connection that can be directly ported into your RPG if character death is a thing (see above). RPG Judges/GMs could easily just say "you come in at the lowest level in the part minus 1" or similar, but by tying it to how well the city at the center of the campaign is doing you are telling the players that they can affect their own future characters by ensuring the city does well.

Equally as impactful (though we often forget about this) is that reputation influences item pricing. As the player group gains reputation they can buy items more cheaply (or presumably at greater cost if their rep is in the toilet). This hits the players in their characters' wallets, and that can be shockingly effective. Again, the players' characters' actions can have direct feedback on the way the world reacts to them. This is lost on murderhobo style games, which can be a real shame because it robs the players of the repercussions of their own behavior through the characters.

Similarly some of the random encounters that can take place within the city or on the road can be influenced by these values. A merchant may pay more after getting help if the character's have a high reputation, or a NPC group may react differently if Gloomhaven's prosperity is above or below a certain threshold. Consider how the wealth of a town impacts the way that raiders, merchants, and neighboring towns view it. A poor tow is less likely to see raiders and merchants will visit less often, while neighboring towns may look to annex land, and steal capable citizens.

I could probably go on for quite a bit about how the structure of Gloomhaven's quests and random encounters mimic the best aspects of a hex crawl, about how the random encounters are really well designed despite being a simple two choice system, or how the game is smart enough to lock side quests away behind gating accomplishments (we really want to find a way to breathe under water so we can do a side quest we learned of a long time ago), but I think that can maybe be another blog for another time. In the meantime maybe take a look at your own board games (RPG-like or otherwise) and see what you can take away from them for the purposes of your RPG sessions, and let me know if there's anything cool out there I should know about or look into.
Posted by Marc Plourde at 12:30 PM No comments: