I looked across the water at Lakeside. The town crawled its way out of the lake and up the cliff face like some kind of creature pulling itself out of the water. Gods above I hated Lakeside; it was always damp, always wet and slick. The Falls drenched the town, emitting a constant spray that you could never avoid. You'd think that with so much constant water you could escape the smell of fish, but you'd be wrong. Lakeside was an assault on my senses, and I loathed to go back.

Yet, here I was forced by fate once more.

I'd burn the town to ash if only I could. Can't burn down a town built from stone and perpetually wet; a shame, that. I shook my head and set my jaw; the job wouldn't do itself, and I was in desperate need of coin. I checked the hidden compartment in my staff; a long narrow tube that ran nearly the full length, and was cleverly concealed by the wood's natural rings. Nearly two pounds of dragon bone dust was hidden away in tightly sewn silk pouches.

Get in. Deliver the goods. Get paid. Get the hell out.

It was so easy I'd done it hundreds of times. I'd made my living out of it. Smuggling the most exotic and rare, and illegal and dangerous, goods paid me well.

Well enough to even go back to Lakeside.
Posted by Marc Plourde at 12:30 PM No comments: 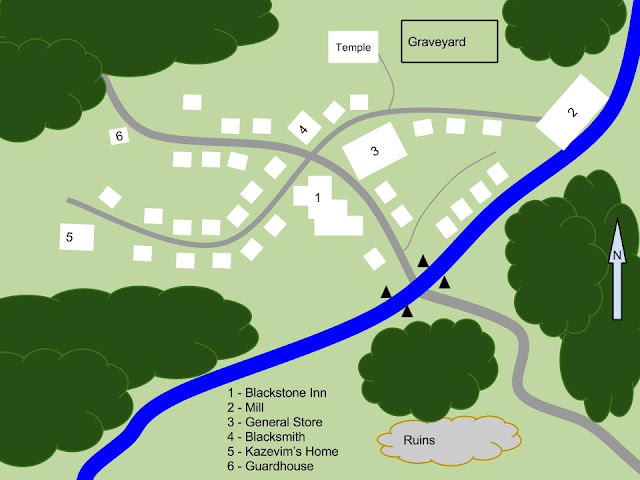 Anyways ... This is Blackstone Ford, a town that features in the novice portion of my Year of the Demon Lord campaign. Depending on how things go maybe I'll throw some money at somebody to make this not look like ... that. For now though the map is a tool only, and it doesn't need to look pretty to be functional in my game. No, it needs to be functional!

At any rate... here's a little detail on Blackstone Ford in case you are equally skill challenged with maps and want to use this ... or if you want to use the town and draw your own, less crappy map. I tried to keep things such that even people playing games other than Shadow of the Demon Lord could use this as well. Let me know if you do, I'd be interested to see what you make of the mysteries I laid into the foundations.

The Black Stones
Four jet black monolithic stones jut from the river's banks, two on each side of the river. Together they bracket the shallows of the ford for which the town is named. Almost all of the town's residents agree that the stones are some kind of old magic, but they do not agree on their origin. The stones themselves are roughly 10 feet tall and covered in worn glyphs and runes.

The Guardhouse
On the outskirts of town a stone guardhouse sits on the road between  the town and the forest. Though the town has no palisade or other defenses of note somebody built this structure years before (well before anybody in town remembers) and it still sees use today by the men of the town who take rotating shifts watching the road. The men of the town are not trained as soldiers but many are capably hunters and can easily be deadly with a longbow in the fifty yards between the treeline and the guardhouse.

The Blackstone Inn
This massive sprawling stone and wood structure is the second largest building in town, even dwarfing the temple and the general store by fortune of being four stories high. Though the forest road is no longer a major route of trade there is still enough from the forest to the cities in the south that the inn has a large stable and plenty of rooms for caravans. Honon Dankal and his family run the inn.

The Blacksmith
The blacksmith would make for a large home but instead it makes for a very impressive workspace. Hod Deathmetal is one of the town's few orcs, and any prejudice he may have encountered is long gone, replaced instead with respect for his trade skills. Huge, even for an orc, Hod stands nearly nine feet tall with arms to match. His body is utterly hairless, whether by some quirk of his creation, or simply too much time spent in the hot spark-ridden forge. Despite his fearsome visage Hod is far from the hulking savage most would expect. His smithing skills are quite advanced and he is an intimidating merchant. Hod refuses to forge any swords, but is more than able to produce hammers, picks, mauls, and axes in addition to countless horseshoes and other wrought iron wares.

The Mill
The largest building in town, the mill runs off two massive paddlewheels, and contains a large and irritable steam engine. As often as not the steam engine is broken however (which keeps Kazevim busy with repairs, and Hod busy forging new parts), but when it does it belches black smoke and white steam into the skies and makes enough noise to drown out the saws and even make Hod's hammer and anvil seem tiny. The mill handles mostly wood from the forest, but has a small grinding stone for grain during harvest season.

The General Store
Galmont Devlin runs the general store. A sprawling structure that takes up a great deal of space at town center. Galmont is a pretty woman in her middle years who came into town two years ago and took over the store after the death of Bomont Devlin, her twin brother. Some say that she knew to come because she had sensed his death wherever it was that she was in the world at the time. Galmont doesn't talk about her past, and those who pry into her affairs quickly find that prices at the general store are not always set to market value.

The Temple of the New God
About three-quarters of the population of Blackstone Ford worship the New God at this temple. The town constructed the temple generations back and say that it's location was where Astrid camped for one week while tending the town's sick, and converting many of them to her ways, during a terrible plague. Mother Hepp is the installed officiant. She is helped by Sister Vinda, an orphan of a horrific blaze some twenty years back.

Kazevim's Home
Alchemist, engineer, arcanist, madman; Kazevim is equal parts of each of those things. The white haired gnome inventor lives on the outskirts of town in a ramshackle home that is part workshop, part burrow, and a constant fire hazard. Kazevim is employed at the mill to keep the steam engine working, but when he is not there is is usually tinkering with something in his workshop, or repairing the same after the catastrophic results of his last set of experiments. Nobody in town knows what Kazevim is trying to build in his workshop, and nobody is really certain what will happen if he succeeds.

The Ruins
Nobody in town knows who used to live in the ruins, or from when they date. Scholars from the empire occasionally attempted to delve the underground portions of the ancient structure(s?) but never made it very far. Town legend has it that the Blackstones are related to the ruins in some way but none remember the story well enough to know if it explained how. Being on the other side of the river the ruins are seldom explored by townsfolk, and stories spun by the adults of vengeful ghosts keep most of the children away as well.

Edit 1:
Below is a new map I created with the HexKit program based on the drawing above. 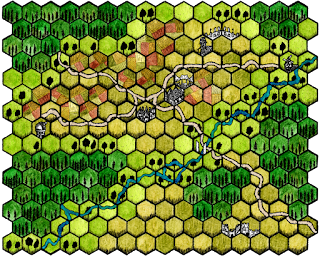 Edit 2:
So it's been a few years and I'm going back to Blackstone Ford for a DCC campaign. It's gotten some tweaks and an updated & expanded map which I figured I would post here. The ruins of Blackstone Fortress are the locale where the first 0-level funnel, Sailor's on the Starless Sea, took place. As it was a TPK the chaos lord was able to fully resurrect. To the east there is a hill with standing stones on it where the 2nd funnel, Portal Under the Stars, will begin. 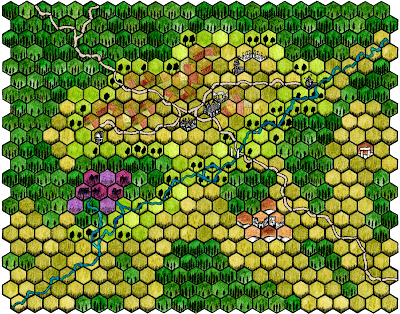 Story Seed - Last of Her Line


"I'm afraid there's nothing I can do. The sickness, infection, whatever you call it; it is progressing ever faster."

"There is nothing? Anything, we are a wealthy country, no price is too high!"

"I have already tried all my tricks, my medicines, and my artifacts of power. The corruption is has shown no heed to any of them. Whatever has caused this I can neither say nor lift. I am shamed to admit it lies beyond my knowledge."

The Chancellor's face fell, "Then we are truly lost. Without the princess the bloodline will end and the country can only die."

"That seems a bit apocalyptic doesn't it Chancellor? Surely-"

"No, you misunderstand, the country survives only by the will of the royal blood. Our borders repel invasion through great relics of old, but only those of the blood can maintain the relics."

"Let's me see these relics then; perhaps I cannot save your princess, but mayhap I can save your country..."
Posted by Marc Plourde at 12:30 PM No comments:

Friday
Called in Dead - no update
Posted by Marc Plourde at 12:30 PM No comments: