Zags is still young for an orc, but he is already as large as an orc with another five years. Zags was brought to Freeport as a young child to serve as a slave doing hard labor unloading merchant ships. Extraordinarily strong, he managed to break free during the great hurricane six years ago and escape into the jungles of A'val. Zags managed to eke out a living for nearly a year before the Great Green Fire swept over the island. Zags was caught in the fire and badly burned over half of his body. Somehow he managed to claw his way to safety where he was found by the people of Freeport. Thanks in part to the aid of temple healers Zags recovered from his grievous wounds, though to this day his body is covered in scar tissue and deformations caused by the magical fire. Worse, the pain of these wounds drove the nearly feral orc partially insane. As a result Zags is now prone to berserker rages, and even at the best of times has a sullen and bloodthirsty demeanor.

It's been five years since the fire ravaged A'val, and since recovering from his wounds Zags has worked as a guide in the fair scarred inland of A'val, and occasionally hires his muscle out as a mercenary, though many companies find his bloodthirst too much of a liability. In the meantime Zags continues to look for a purpose to his life beyond simple subsistence.

Claimer: Before I begin I should note that I backed this at the Kickstarter phase, and that I am friends with the creator. I'll do what I can to not let that color my opinion.

Non-player Cards are made up of several decks of cards designed to quickly enable the creation of an NPC on the fly by drawing cards from the needed deck(s). The decks cover Traits, Professions, Relationships, Goals, Secrets, Quirks, Personalities, and Names. I'd have bought this for the last deck alone, because I suck at names, but as a combined whole these make for a great way to quickly build an NPC when the players latch onto an unplanned encounter. 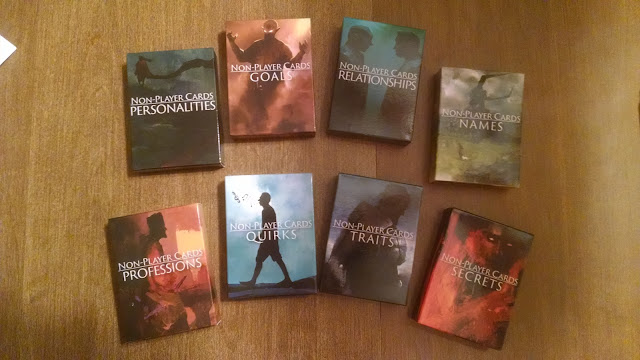 This being the Kickstarter edition it came in a nice sturdy box with each deck in its own tuckbox. This ensures that you won't have a mess to deal with, which is really nice. The artwork shown on the tuckboxes (above) and the cards (below) is but a small sampling of the art for the product. Everything is by Eren Arik who uses a rough style that minimizes detail and leaves as much room as possible for the user to interpret the cards as they see fit. The cards themselves are a good quality card stock with a nice coating, they did a riffle shuffle (a.k.a. a bridge) really well right out of the box. 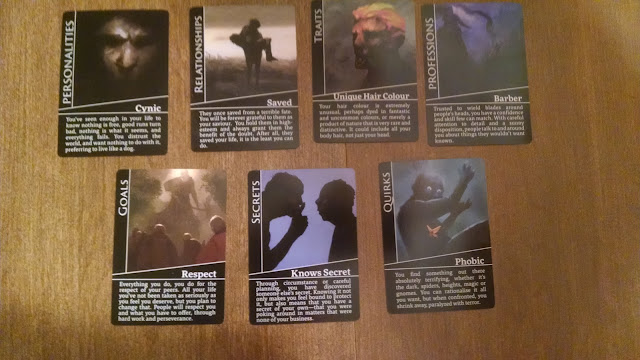 I decided that the best way to show these off was to take a test drive. I shuffled each deck and pulled a card and random, two for the names deck, to build an NPC from. I got a barber with unique hair color for profession and trait respectively. I decided this character would be for Numenera and so I set his hair as holographic fire, kinda like Hades' hair in the Hercules cartoon film, but in shades of yellow, red, and orange. His personality was cynical, which goes well with the phobic quirk and "knows secrets" secret card. Now I picture a man who hears a lot while doing his job, but fears revealing those secrets, to the point of being paralyzed when questioned about what he knows. His outlook on life is generally too negative (cynical) to actually do anything with what he knows anyway, so that works out in his favor. His goal is simple respect; his outlook on life an humble position make him somewhat of a ignored individual, a fact that he wishes were not true. Lastly he was once saved, by who and under what circumstance I am not sure, but it formed the basis for a strong connection to another NPC (or possibly a PC). 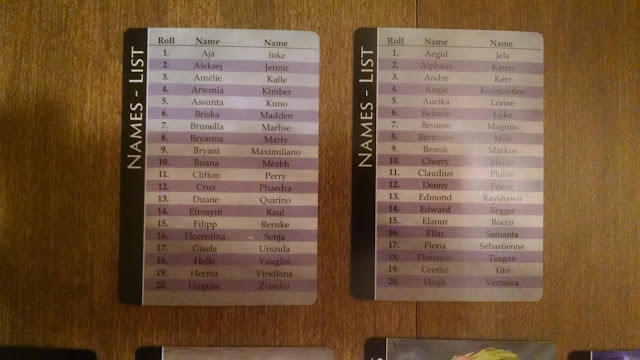 Fof the character's name I draw two of the cards that had full names (there are other cards that have parts of names if you want to build some really odd names). I rolled a d20 on each and pulled a first and last name from those two cards: Aja Aegid (getting a 1 both times was less than ideal, but hey, at least I didn't have to make up a name!).

Overall I am quite happy with these cards. They make a tool that I very much needed for my table, and I think most GMs could probably use some, or all, of these decks as well. While the Kickstarter is long over you can buy the cards as a bundle, or in individual decks from DriveThruRPG including Print on Demand options. There is also a book format Non-Player Compendium if you are not one for cards, or just prefer to have all of your options laid bare.


Worldship Vesta wasn't the largest in the Earth Exodus Fleet, but it was big enough. The potato shaped vessel was massive, easily able to accommodate nearly a billion souls. Rotating around a central access shaft the curved living space within the hollowed out cylindrical interior approximated Earth standard gravity. A multitude of fusion reactors located on the surface provided power and motive force allowing the Vesta to achieve a constant acceleration of 0.098 meters per second squared. Sustained over the past decade the Vesta was now cruising along at almost 10% of the speed of light.

Vesta's course was plotted out for a twelve light year journey to exoplanet Eden. Like the other Worldships the Vesta was traveling alone. With the Earth no longer capable of sustaining human life the world's leaders had opted for the most conservative approach to safeguarding the species; splitting the human race between the four exoplanets most likely to be capable of supporting humanity in the long term. Worldship's Ceres, Haumea, and Eris were each on their own journey's to their own worlds, each shepherding a large portion of the Earth's displaced population.

The people of Vesta had not heard from the other Worldships in years now, and it was possible they never would. In effect they were forced to assume that they were the last of humanity. Vesta drifted through the void, a hollow world filled with the precious life to start a new world. A great egg in space, waiting to find a place to hatch.
Posted by Marc Plourde at 12:30 PM No comments:

Monday
Nuts & Bolts - Skyward, a Recursion for The Strange

Friday
Shadow of the Sea Lord - Fairhilde Goldheart
Posted by Marc Plourde at 12:30 PM No comments: