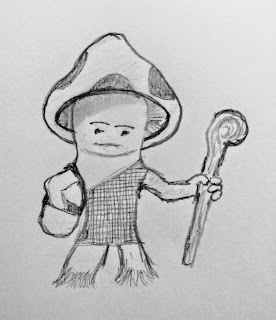 Much like animals and plants mushrooms and other fungi were heavily affected by the mutative effects of the great disaster. Though rare, intelligent humanoid(ish) mushrooms and fungi have evolved and mutated into being in the unknown years since the great disaster. Unlike manimals and plantients the unique physiology of mushrooms and fungus, specifically the presence of the interconnective mycelium has meant that the Shroomers have evolved such that they display very few physical mutation but a heightened presence of mental mutations. Likewise they retain their native ability to connect to the great fungal colonies of Terra AD with various benefits.

Artifacts: Shroomers have no natural affinity for artifacts but due to their highly evolved mental capacity they do gain greater understanding as they progress to higher levels.

Summon Spores: All shroomers are servants of the Great Fungal Intelligence, a world spanning intelligence that resides within a global network of mycelium. This allows the shroomer to summon spores of the Great Fungal Intelligence for various effects equivalent to the Nanogram wetware ability (page 255). This power can be used once per day per character level. The Shroomer rolls 1d20+CL+Per and gains defects instead of patron taint when a "1" is rolled. The Judge to adjust the descriptions of these effects to suit the spore and fungus based source of the power. 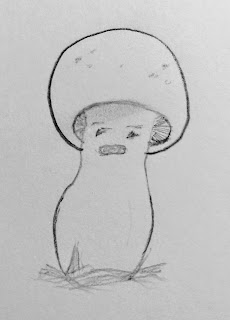 Mycelium Nutrient Transport Healing: A shroomer may, in natural areas, make contact with the global network of mycelium and spend 1 turn absorbing nutrients from the mycelium to enhance their healing. Doing so heals the shroomer of 1d6+CL damage.

Radburn: Shroomers exposed to radiation or other mutagens may develop - or sometimes even lose – mutations (see Chapter 3: Mutations). Shroomers that lose all of their mutations devolve to into a non-sentient fungal or mushroom organism. If this happens in an area where they are able to connect to the mycelium, or if they are carefully transported to such an area, they may regain a single mutations at the will of the Great Fungal Intelligence. The shroomer makes a standard luck check, using the luck score they had at the time of their de-mutation, and if successful immediately gains 1 random mental mutation as well as their former ability scores, language, upright locomotion, and prehensile appendages. 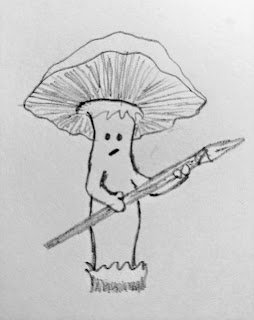 Glowburn: Shroomers may elect to use glowburn when activating a mutant power or summoning  spores (see Chapter 3: Mutations).

AI Recognition: Shroomers are not recognized by AIs. They are simply too alien for an A.I. to mistake them for an ancient one.

Archaic Alignment: Shroomers player characters automatically begin as servants of The Great Fungal Intelligence and may not join any archaic alignments unless their master allows it.

Shroomer Titles (level/title)
~~~~~~~~~
Feedback and comments are welcome, so long as they are constructive.
Posted by Marc Plourde at 12:30 PM No comments: