MCC Recap - A Door Too Far

This week I ran the second third (I think) of A Fallen Star for All with a ragtag band of seekers trying to breach the uncovered ancient stronghold.

Spoilers for the first bit of A Fallen Star for All ahead...

New player! New character! +Forrest Aguirre (a.k.a. the other host of Glowburn) joined the group this session (I'm Judge to the stars now I guess) as Piertramp the Sentinel. I started play off by filling him in on the lead up events of the starfall and explained that he was with a group calling itself the Tribe of the Golden Frog, but had been separated during an attack. He found himself weaponless and approaching a patch of strange jungle that seemed untouched by the apocalypse of the starfall. Within he could see the forms of two beast-things being apparently consumed by the plants, and one of them had a huge bone club! Piertramp risked an approach so that he could arm himself, and was rewarding with a two-handed greatclub doing d12 damage! He also grabbed a strange fruit from the jungle before escaping its entangling vines.

Meanwhile the others, now with the mutant Sinclair in tow, had left the ancient structures behind and were making for the starfall crater where helpful artifacts could be found.I informed Andy that Sinclair could not remember how he got to the buildings but that he had been separated from his group, the Tribe of the Golden Frog, in an attack. This had the effect that I hoped when the group met up with Piertramp and made the meeting go a little more quickly (and with less bloodshed, although a PVP TPK could have been hilarious). Sinclair made a snack of the strange fruit that Piertramp had found, and then tried to get some more with Flik-Flak's help. The two of them came away empty handed however as the carnivorous jungle was more than a match.

Opting to go around the strange plants the group ran into a strange creature. Short with soot dirty white fur and long ears it saw them and retreated carefully. They attempted to talk with it but it seemed unwilling to entreat. Further attempts were put off by the sighting of a pair of beast-things at the rim of the crater. Approaching carefully the group found the pair at the opening of a damage structure of the ancients uncovered by the fallen star.

Combat ensued with the group quickly wiping the two creatures out in a single round but not before their champion could emerge from the ruins. With a swipe of its mighty axe the champion downed Tarn but was easily dispatched by the group while Agutter set about to save Tarn's life. Exploring the interior of the cave with a makeshift torch the group found a number of artifacts but decided not to take the time to study them and instead moved on, crossing the crater by circumnavigating the rim to a second exposed structure.

Within this space they found a strange metal door that was extremely difficult to open because Cypher was zoned out communing with ACHROMA. When the group finally levered the door open they found a dark shaft leading downward, the walls of which were studded with strange ovoid pods. Prying a couple open they found a pair of flame retardant suits and a strange sphere. Agutter tried to get another pod open but fell into the shaft and luckily grabbed hold of the pod to arrest their fall. (Aside: AGutter's player Paul couldn't settle on a male or female pronoun and so we determined that Agutter is apparently genderfluid).

While hanging in the shaft Agutter opened another pod and released a hostile robot that attacked them. The others, clustered around the door above attacked with bows and spears and Gauzer pistols until Piertramp smashed the robot with a one-handed swing of his mighty club while hanging onto the doorway with his other hand (a 14 on a d14 attack roll!). The falling robot impacted with something about 20 feet below (30 feet below the doorway) and Agutter decided to try and climb out of the shaft but slipped (again) and fell (again) taking some damage (2d6 but I rolled low) when they landed in in a heap on the remains of the robot. Investigating Agutter found that this was a machine, apparently capable of navigating the shaft up and down. It was lacking power but used C-cells and grabbing one from the Medi-pack Agutter was able to power the lift and get back to the rest of the party. Now they had a way down into the structure, and planned to see what they could find within...

Most interesting behavioral change:
Most Clutch moment(s):
Interesting (to me) Rules Adjudications:
In Memoriam:
Posted by Marc Plourde at 12:30 PM No comments: 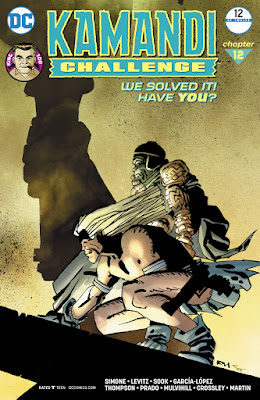 Kamandi Challenge #12 is out and at last the series is wrapped up and complete. Here's my thoughts on


OK, where were we? Oh, right, Kamandi was in hard vacuum and falling toward earth. A briefly has a weird dream, or perhaps a vision of a girl like him named ... wait for it ... Kamanda. Get it, Command A, Kamanda. Ugh. Yeah, sadly it doesn't get much better.

Kamandi gets woken from his reverie by Royer and Silverback as the three plunge downward toward the Earth. No, no final confrontation on the Tek-Moon, instead with the help of his jetpack and the self sacrifice of Silverback to protect his companions Kamandi and Royer crash in the wastelands once more.

There they are attacked by a group of rats but quickly a peace is made when the rats realize who Kamandi is and take him to their leader. Gnawbit, the rat leader begs Kamandi's aid in destroying the Misfit's Terror-Naut by being the pilot for ... a gestalt of rats in the form of a huge "king rat." Mecha on rat-gestalt combat ensues with the Terror-Naut finally being destroyed by the use of a Cyclo-heart to cause a massive fusion explosion.

And then things get weird...

Kamandi at last meets his dad in the form of Jack Kirby. Kirby grants Kamandi three wishes. We get a couple of trippy almost if situations, and then Kamandi uses his third wish to apparently reset the world entirely.

OK. Story wise this issue was a disappointment for me. I don't know if this was planned or if the blame falls squarely on the shoulders of Simone & Levitz but I was underwhelmed. Artistically this was a good to great issue. The panels are detailed without being busy, the story in pictures flows cleanly. World building was limited with only the introduction of the apparently techno-organic rats. Who is the Misfit? We'll never know. What happened to Kamandi's parents? They don't tell us. Truly the end did not justify the journey.

OK, So I didn't much care for the denouement of the series, but what about the series as a whole?

As a whole I can say that it was an interesting experiment. Having a variety of voices and artists on the project led to a wide array of styles of the story telling and the stories themselves. Unfortunately the "challenge" part of this project also led to very disconnected story transitions at times, and, ultimately, a less than satisfying ending. I think there's something there if there's a little more editorial oversight of the whole to ensure that the parts fit.

That said, I think that for people new to Kamandi (as I am) it worked well as an introduction to the world. The various authors skipping about the world and introducing all corners of the setting in brief or in depth provided great world building for the most part. As a gamer, and a fan of post apocalypse stories, I could easily take what parts of this setting I was shown and flesh it out for use on a tabletop. Would it be deep and detailed? No, but that's part of the fun of playing RPGs is creating that depth and detail as GM or player in game at the table. I'd rate the world building at a 8.5 out of 10.

Story wise the series overall is hit or miss issue to issue and the overall is a little disjointed and lacks a satisfying conclusion. Other than Kamandi there are no long term characters to last more than 2 issues which is not a point in its favor. Likewise there's a general lack of strong female characters which is also a disappointment. Story I'd rate 6 out of 10, buoyed by some of the better early issues.

Art is also hit or miss. Generally though the art was good to great. There were 2 or 3 stand out issues where the art was amazing, and only one where I really thought the art was lacking in quality and clarity for storytelling. I'd give the art a 9 out of 10 overall, with a few standouts that are easily 10s.

My overall rating of the series is an 8. I considered a 7.5 but the good parts were good enough to raise it up.

Series Rating
Posted by Marc Plourde at 12:30 PM No comments: