Last week I discussed and explored the idea of taking the familiar and changing it, altering it, and making it unique and new again for a game. In doing so I re-worked the traditional fantasy Ork from the stupid and brutish green skinned dungeon denizen to a brown skinned, forest dwelling farmer race known for their woodworking skill. Physically the change was minor, socially they fill a wholly new role in the world. This week I am going revist this same idea, but transfer it into a science-fiction setting ... 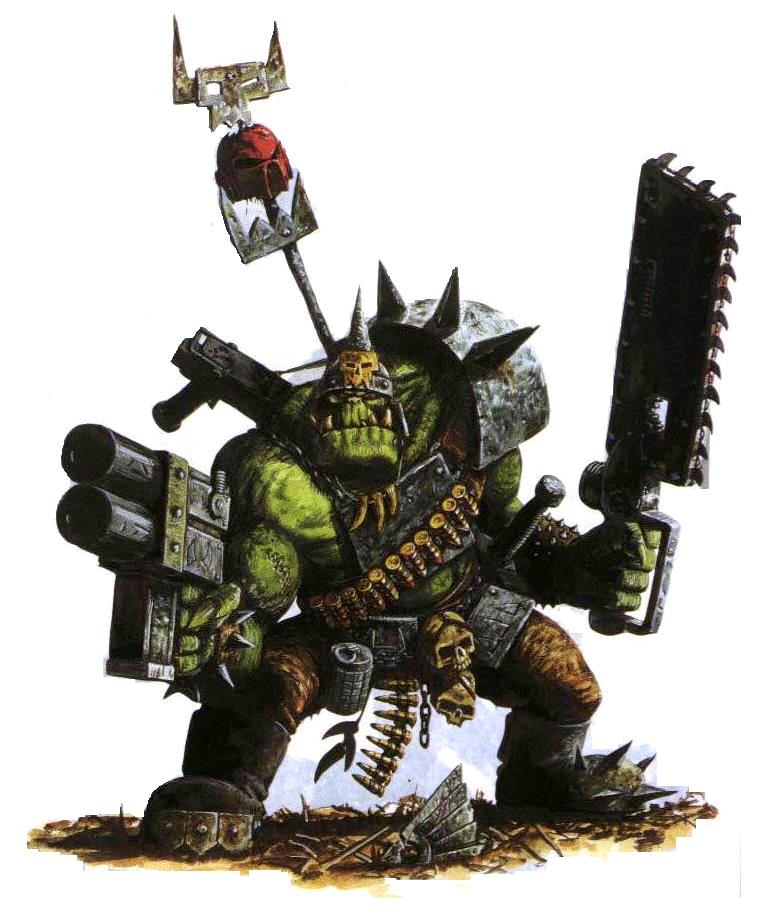 The Ork isn't really a staple of many science fiction RPGs; off the top of my head I can think of two, Shadowrun and Warhammer 40,000 (pictured right). In both instances much of the standard features are still present, the physical power, the mental weakness, and the tendency toward barbarism. Both games & settings have put their own spin on the Ork. In Shadowrun they are a subspecies of man, have only a slight reduction in mental and social skills compared to the baseline, and lack the green skin tone that they are often known to have. In the 40k universe Orks are a fungus. No joke, they grow from spores in pods beneath the surface of any world so infected by them; props to the guys at Games Workshop for that one.

Given the high technology nature of most science fiction RPGs, and given what I did with Orks last week, one may be expecting a technologically advanced race, zipping about in spacecraft, firing laser weapons, teleporting from place to place and more.

Physically we start with the stock ork and lengthen their arms and make them even more heavily muscled, truly possessed of massive physical strength. The legs we shorten and reverse the knees, so that the ork now walks digitigrade. With much of the power in the ork's body in the arms and chest the creature now walks hunched and stooped over, using its knuckles, which are covered in thick leathery and bony studded plates. The lower jaw is further enlarged and the tusks are modified to point outward, for goring attacks on the charge. The changes wrought would yield a creature somewhat crossed between a gorilla and a warthog or wild boar.

Mentally we make the ork a natural predator, cunning, quick to learn, and naturally possessed of tactics and teamwork skills to flank and outmaneuver its prey with its pack. Instead of a sentient being the ork is now a savage apex predator of a far flung world. Territorial in the extreme and powerful enough to defeat one or more fully armed and armored men on its own, able to take down even greater numbers or large prey when working within a pack. This beast is rather inconveniently located on one of the few habitable worlds that humankind has found thus far. Worse, its natural environment lies within the forests and plains where valuable resources, or important agricultural land is found. Pushing the creature into confrontation with humanity almost from day one.

Same questions as last time folks. What do you think? Is this a race that you would be interested in seeing in a game, or is this instead too different?