Back Issues #13: Recipe for Disaster

As I wrote this, I was making spaghetti sauce. I have a recipe, but what is written down and what ends up in the pot are pretty much never the same. For instance I usually add some onions, carrots, and celery to the pot, but yesterday I didn't have celery at all, and I did have some parsnips. In they went, along with some celery seed to make up for the missing stalks. It'll be fine, I'm following the recipe mostly ... 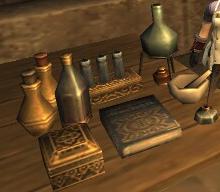 Potions, salves, poultices, balms, and more are all pretty much staples of the fantasy genre, and can sometimes be found in modern or Sci-fi RPGs. Potions require ingredients, recipes, and the proper tools of the trade. Quests have been made of searching out rare ingredients, locating long lost recipes, and even making use of a brew to de-buff or otherwise make an invincible enemy capable of defeat.

But what happens when the recipe isn't followed properly? When an ingredient is incorrect or substituted? When the equipment is makeshift? Which isn't to say I'm advocating that every misstep or cut corner result in a bad thing; quite the contrary, happy accidents do happen. Of course, so to do bad things happen.

In part, what happens to alchemy gone awry is going to depend on the needs of your story. Is the proper execution of the alchemical brew a main plot point, or a side aspect? If the characters depend on the potion to save a teammate, or defeat an otherwise indefatigable foe, or some other matter of primary import, then the improper interpretation of the recipe or brewing needs to be likewise central to the game, by necessity the players need to be given a fair shake unless it it your intent that things go awry in order to segue into another aspect of your story. Having players spend four weeks gathering the proper ingredients for the potion that will enable them to defeat the monster only to penalize them for not chanting the proper phrase when they gathered the demon's blood isn't fair. If they willfully ignore the instructions they were given feel free to stick it to them, but if it slips their mind go easy on them, it's only fair to either have an NPC question it, or to have the potion work anyways.

For secondary concerns, be they potions to buff the PCs, de-buff enemies, or for other reasons that are not critical to the plot of your game you, as GM, have more freedom to interpret the effects. Incorrect preparation can result in potions that work better than intended, differently than intended, or not at all. Likewise things can backfire during the process; a cauldron explodes, released foul gases, or summons a creature.

Effects that work better than expected will likely result in the alchemist attempting to verify the new recipe, after all, he has made something greater than expected, it is natural to wish to quantify and repeat the feat. Effects may find their durations increased, their effects made greater in scope, or a beneficial secondary effect stacked upon the first. A flight potion may allow greater speed, longer duration, or even allow the user to see greater distances like an eagle.

Brews that are flawed, that is they function but not as intended, can be flawed in more ways than I could possibly recount here. The effect may be opposite, have the desired function with an undesirable method, or even provide some entirely different effect, or a side effect added to the normal. The aforementioned flight spell may cause the user to grow wings for the duration (or longer), may instead result in a digging/tunneling or swimming effect, cause the character to float uncontrollably at the whim of the winds, force the character into the air by turning them into a bird (and thus leaving their gear behind), or other effects.

Of course these same mishaps can be similarly applied to botched rituals, improperly built magical items, incorrectly written scrolls, or even spells cast improperly. Similarly in modern games the effects of poorly researched super science, or badly designed gadgetry may have the same kinds of mishaps when implemented. Imagine the result of an poorly performed genetic graft or nanites whose programming is improperly coded. The sky's the limit.

What have your GMs done with an improperly prepared magic brew? As players what kinds of effects do you like to see when something goes awry? DO you try to keep good humor when the effect is humorous? What of your feelings when your hard wrought labors prove for naught because of a incorrect preparation either as an IC or OOC factor?
Posted by Marc Plourde at 12:30 PM