DOOM! Or not. Who knows really? Well, maybe the Mayans, they determined that the current age would end in 2012 and didn't bother to write down anything after that leading all kinds of wack-jobs to assume there won't be anything beyond it. Looking around at the news lately it does make one wonder. Earthquakes, storms, wildfires, volcanoes ....

Below you will see what looks like something out of a science fiction movie. It's not however, it is a phenomenon called volcanic lightning or a dirty thunderstorm. I've seen photos of similar before, but it's still an awe inspiring sight, and one that was probably extremely frightening to our ancestors who didn't comprehend it. Vulcan and Zeus warring in heaven perhaps.

Volcanoes get a bad rap in most depictions. I get why, they kill people, destroy forest and farm lands, and sometimes wipe entire cities, and islands, off the face of the earth. Pompeii was lost for 1700 years. Krakatoa was blown off the map almost entirely. Theories even put the island of Atlantis on the real island of Santorini which suffered a catastrophic volcanic destruction at some point in antiquity about 3600 years ago.

Of course the flip side is that volcanic soil is often richer than any other, and idea for crops. That volcanic eruptions are responsible for many islands around the world including many that continue to grow. Volcanoes are as much a force of creation as they are of destruction. A cycle of death and rebirth. Bet you've heard that before. 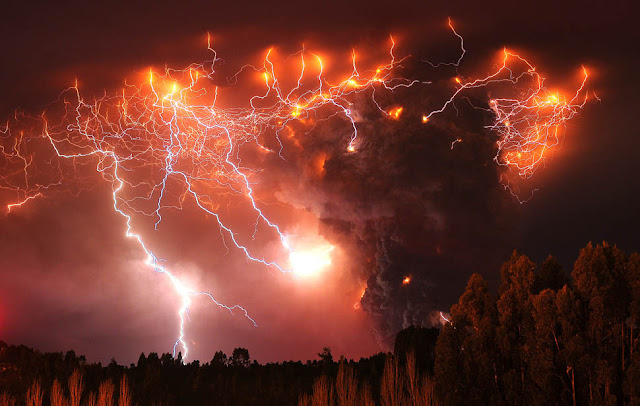 In a fantasy RPG the threat of a volcano is probably going to serve as either a backdrop to the story, or as a historical event. When magic, especially elemental magic, is present it is possible for a powerful being or beings to create and control volcanoes. Sometimes in scope limited and suitable for use in combat, other times as tyrannical rulers over the lands in the shadow of the mountain.

Plot Idea #1: A thousand (or more) years ago the great volcano wiped out the last great Elven (or whatever race) civilization. In the time since a new empire has sprung up, one that the character's live in and rather like, but the priests and priestesses have foretold another eruption that will destroy the empire unless it can be stopped. There is time and a group of heroes can be sent to gather the relics/magics/wizards/McGuffins needed to save their nation.

Plot Idea #2: The heroes, explorers of the world that they are, come to a land where the local volcano has been harnessed by a master of fire and earth elemental magics. The evil mage uses it to extort riches and virgins from the local peoples. Being the good guys they vow to stop the mage before the next "harvest".

Sometimes the volcano itself proves an important setting for the story. The Lord of the Rings had Mount Doom, The Chronicles of Thomas Covenant The Unbeliever had Mount Thunder, The Elder Scrolls has the Red Mountain of Morrowind, and I'm sure there are others. In the former, Mount Doom, and specifically its lava chamber called The Cracks of Doom, was the goal of the story, the only place where the One Ring could be unmade and the world saved. In the latter, Mount Thunder served as the location of the Ritual of Desecration, the resting place of one of the Wards of knowledge, and the site of Lord Foul's eventual defeat in the second trilogy. Mount Thunder was integral to the setting and the events of the series. It was connected directly or tangentially to many other plot points, and given the setting's emphasis on earthpower its easy to understand why, few things in nature hold the kind of raw power that a volcano can.

Plot Idea #3: The Sword of Kings has been broken. The how may be important, or not, but the key to restoring it is reforging it in fires hot enough to melt the enchanted metal. That means either a dragon or a volcano usually, and in this case the heroes get saddled with not only a dangerous quest to a volcano, but also babysitting the master of the forge who knows the technique needed to repair the great weapon.

Plot Idea #4: "I just need one more thing ..." Yup, the old "shopping trip quest." In this case the character's need to retrieve and return with the molten lava of a volcano for their master/patron to finish a magical ritual. It's not as easy as it sounds though because in this world the volcanoes have been going out one by one (which is causing an long and dangerous winter). The PCs need to find an active volcano, get there before it goes out, and return with the lava that will allow the ritual to be completed and restart the world's volcanoes/heat engines. Too bad there is something that wants very badly for them to fail and bring about an age of frozen winter.

What about you all, how would you use volcanoes in a game? What ideas spring to mind when looking at these pictures?
Posted by Marc Plourde at 12:30 PM