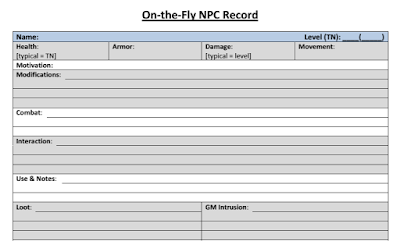 So like a lot of people (I hope) my memory isn't exactly iron clad under the best of circumstances.  Usually when I throw together an NPC on the fly I'm lucky if I can keep them consistent within the same scene let alone during the entire session or over multiple sessions. As a result I built up a couple of records for use during campaigns.

The first is a generic NPC record. I use this for things like gang members, town guards, soldiers, and the like. Any time that the PCs are meeting one of a group that is pretty much going to be a bunch of cookie cutter goons (and yes, even friendly NPCs can be goons).

The second is a Named NPC Record.  I use this for ... named NPCs ... *ugh* ... Anyways, this sheet is useful for the guys important enough to get names AND who are not under the threat of immediate death. Player contacts, NPC antagonists with a more long term presence, town leaders, generals of armies, gang or guild leaders and the like.

Both of these forms were designed around the standard template for NPCs in the Cypher system but are open and generic enough for use with just about any RPG system.
Posted by Marc Plourde at 12:30 PM