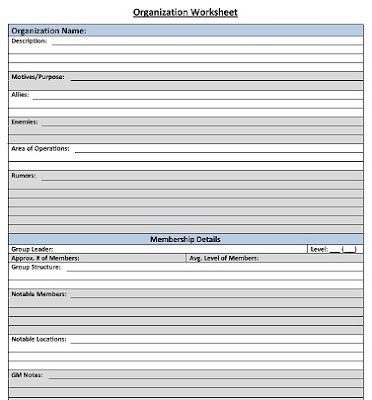 Today I want to share my Organization Worksheet. I built this a while back when I was running a steady (almost) weekly game set in the city of Qi in the Numenera RPG. The players had told me that they wanted to try and get involved with the criminal underworld and one of the PCs specifically wanted to get into an assassin's guild. Since I know that I tend to make up stuff that is cool one session that gets forgotten by the next I built this so that I could take notes and stay consistent week to week, and also so that I could track the damage they dealt to competing groups.

I hope it helps you as much as it helped me, and as always, if you have a suggestion or comment please let me know below.
Posted by Marc Plourde at 12:30 PM