Year of the Demon Lord - Building the Road to Blackstone Ford 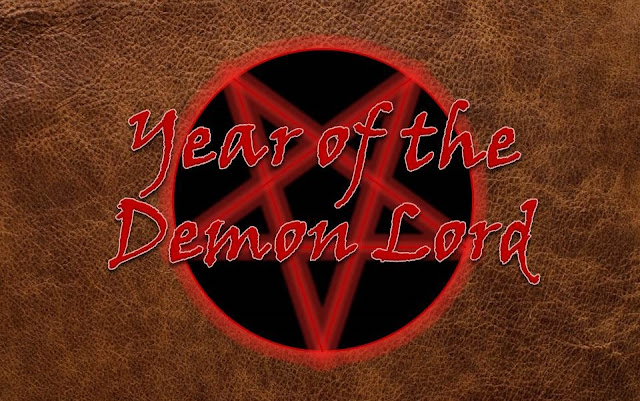 Next week I'll be diving head first into the hot seat as the Demon Lord for a new monthly campaign. When I made the decision to run something "Survival of the Fittest"  had yet to be released, and I had not actually come up with a story for the first session, let alone one for the whole campaign (note: I still have no grand plan in place for the campaign!). By the end of the weekend I had cobbled together a fairly good idea, and a couple of possible encounters. I started to look at the creatures to figure things out ... and then I panicked!

Not only did I have only a starting grasp on the rules but I had no clue how combat in this system would run, and therefore how the balance would feel. There are tables and numbers and suggestions ... but frankly at that point my brain was in "oh crap" mode.

Thankfully the first introductory level adventure "Survival of the Fittest" (SotF) was released just a couple of days ago. It's geared at level zero characters and level zero GMs. Hey, that's me! Phew! After looking it over I realized it was more than capable of serving as a preamble to my original idea which I had titled "Death Comes to Blackstone Ford." I shifted gears and decided to run SotF under the title "The Road to Blackstone Ford." I then told my players to please not read SotF so as not to spoil things.


Survival of the Fittest takes place in the Old Wood, and I had already decided to place Blackstone Ford in the Lowlands near to the Dark Forest. That's an easy enough fix; what's the name of some trees between friends right? I also decided to simply substitute Blackstone Ford as the destination instead of Fletcher's Rest; it would give additional continuity between the first and second sessions, which in a monthly campaign I think is going to be important.

Blackstone Ford is a village on a ford (meaning a shallow spot in a river where crossing is easier) and the ford itself is marked off by large black stones (look how clever my naming is!!). Making sure I could put the new "Fletcher's Rest" on a river was important to me because I wanted to use the map in SotF as-is if at all possible.

I looked at the map and found a good spot for Blackstone Ford that would allow me to be lazy and keep the map without any heavy lifting. I could have used this guy: 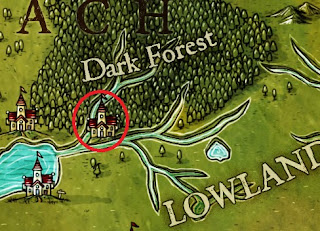 But I figured that if it was on the map it was bigger than I wanted to use for this town. Blackstone Ford needed to be small, maybe a few hundred people at most, and certainly too small for a sigil on the map. I decided to move to the east some ...


That red dot is where I decided that Blackstone Ford lies. It's on the southern border of the Dark Forest and serves as a waypoint for roads connecting the communities within the forest and the northern Lowlands to the southern Lowlands, and especially along the route to Landfall and Good Fortune. It's a small place because there are better roads and faster waterways that make the journey to either city faster, but it survives on local trade and a certain critical mass that means it won't die out but it also won't explode into a full fledged town without something happening to draw new people there.

One problem is that Fletcher's Rest is on the north side of the forest in the SotF map.  Problem? Nah, I'll just rotate the map 180º and call it good. So instead of traveling north through the Old Wood to village called Fletcher's Rest my group will be going south, through the Dark Forest, toward Blackstone Ford.

I plan to run the remainder of the adventure almost as written. There's an encounter or two I may tweak to foreshadow the following session which will be the originally planned "Death Comes to Blackstone Ford," but those details will have to wait until next week ...
Posted by Marc Plourde at 12:30 PM