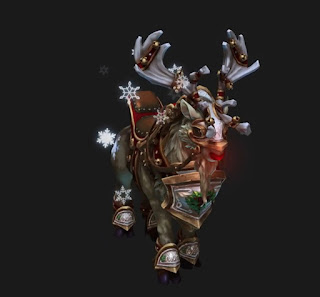 Modifications: Defense as level 4 due to speed.

Combat: Reindeer attack with hooves by kicking, and with antlers by charging as a level 4 creature. One in nine reindeer has a glowing red nose that can fire a beam of energy at level 4 dealing 5 damage.

Interaction: Reindeer are smart but still animals and generally can only be interacted with as animals.

Use: Reindeer are found throughout the North and especially around the North Pole and Santa's workshop. Reindeer are always friendly to those who share the holiday cheer. A willing reindeer can easily carry even a large humanoid creature, and characters who befriend them are able to count them as staunch allies for transportation.

Notes: Reindeer don't fight to the death and will retreat at speed as soon as they are able.

Loot: Most reindeer don't drop any loot, but those reindeer with glowing noses may yield a cypher if slain.

GM Intrusion: The reindeer was part of a herd and 1d6 more come to its aid, either to help defend it or to lend aid to it or its allies in some other fashion.
Posted by Marc Plourde at 12:30 PM