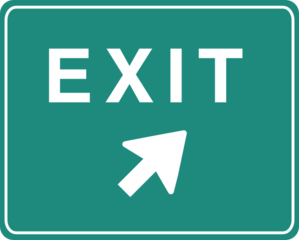 I wanted to follow up my prior post about planning scenes based on the purpose they serve with another tool I use when planning: determining how the players can exit the scene. As I see it, no matter the circumstances of a scene, there's really only two way out, defined exits and undefined exits.

A defined exit is a fixed & finite way out of the scene. This could be as simple as finding a way to open the door of the jail cell that the players are currently prisoner within. Or it could be as complex as a negotiation scene where the exit is the end of negotiations (regardless of how they end). Defined exits are more commonly associated with adventures that are linear in design (such as a dungeon where each room only has a finite number of entrances and exits).

An undefined exit is ... undefined. It's an open ended problem that the characters (and thus the players) are free to "solve" however they choose. This could be a scene of sneaking into an enemy stronghold (do they go in via the sewers, by impersonating the guard, climbing the wall?), or even a combat scene (they could win, run away, perish, something else, or even a combination of those).  Undefined exits can be associated with more open or "sandbox" games and allow the players to have a greater degree of creative control over the game.

Don't mistake my words for implying that undefined exits are in some way better than defined exits. Think of it more in terms of your control over the flow of an adventure. If you plan a scene such that it has only one or more defined exits you have better control over how the scene will transition to the next. This will allow you to plan up front and require less improvisation in play. On the other side, a scene with undefined exits encourages player creativity and can allow for the adventure to go into directions that even the writer hadn't planned for. This will require some more improvisation, but can also be more rewarding for the GM running the game, as they will be able to experience the surprise of the players' solution to the scene.

Another thing to consider is that knowing what kinds of exits one scene has allows you to better plan the entrances for the next scene. If you only have a single defined exit then there should only be a single way into the next scene. Conversely having a number of defined scene exits, or a scene with undefined exits, requires that your next scene (or scenes) be planned accordingly. Again, this can be more work up front, but help ease play at the table. Transition for scenes with undefined exits may also require improvisation, with no real way to plan for every contingency.

Understanding scene exits can help you plan ahead and plan accordingly. It can also help you know how much improvisation you'll need to plan for, and help you determine how your adventure will flow from scene to scene.
Posted by Marc Plourde at 12:30 PM