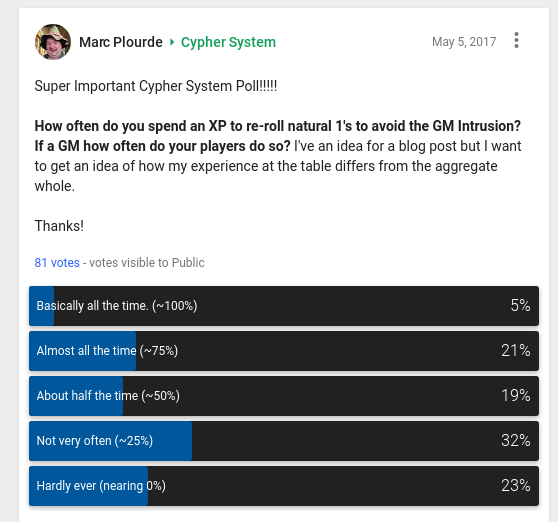 I put the poll shown above up a few weeks ago. I was curious to see if my experience at the table, a frequent re-rolling of 1's, was true or not. I expected to see a high skew toward natural 1's being re-rolled, but in fact the opposite was true. Color me surprised.

This got me thinking on the nature of re-rolls and ... well, I realized that maybe it's just not a thing that can be quantified. Some folks are going to re-roll all the time, others will hoard that precious XP for advancement. Some GMs will be stingy with XP, thus making re-rolls rarer because the currency is more valuable, while others will be generous and re-rolls will come cheaply. Still other GMs may be cruel with their Intrusions, causing players to be more willing to avoid them, while others will be more even handed and players will be less prone to avoid them.

I'd assumed that re-rolls were fairly common, but by the numbers the poll shows that 55% re-roll only rarely or infrequently. So where at the outset I had been thinking of this blog being ideas to help curb overly common re-rolls now I see that this is a problem that isn't terribly common. So instead of a hack to fix a perceived issue I see now that it's a matter of play style, both player and GM, and a matter of the XP economy.

As far as fixing any perceived issue with the XP economy that's up to you and your players. A frank discussion is well advised, and it may be that you need to balance your XP awards better, or remind players that unlike other RPGs Cypher's power curve is steep and the end is far less far away than in other games. It only takes 24 advancements to hit Tier 6. If your players are taking an advancement after every session that's a years worth of gaming if you play every other week, and only 6 months on a weekly basis. So remind them that hoarding XP for advancements isn't always ideal. Conversely if you are seeing too many re-rolls you may also see a slower power progression. This isn't much of a problem, so long as the players are OK with the slower rate of advancement.
Posted by Marc Plourde at 12:30 PM