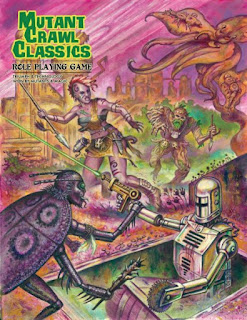 Loyal readers may have noted that I have ceased re-caps of my monthly game. Mostly this is because I find recaps difficult to write and I have had a lot of other stuff that needed to get out more. However, last session saw a "randomish" encounter with spider-goats, and I can't help but make a few notes on the subject.

The three characters were exploring the toppled remains of an old tower, the hollowed out tube of the life making an easy way to guide their progress to the top also felt like a place that something predatory would make its home. Enter a pack of three spider-goats. Things were pretty touch and go not for the damage they dealt, but for the paralytic poison and the entrapping webbing. I use the dice chain a lot so even while webbed the character's could try to act but were rolling at -1d or more. This allowed me to use the webbing to hinder the players without tipping the scales too far too fast since we have such a small group.

I didn't think to mention any egg sacs or webbed over corpses, and the players never asked. This occurred to me (as often does) the day after. I was mad at myself at first, because this seemed like a cool opportunity missed. But then I thought about it more. Spiders consume the liquids within their prey and leave dessicated husks, but goats? Goats eat EVERYTHING. So wouldn't a spider goat first drink all the gooey stuff, and then, while hungry and waiting for more prey, snack on the prey-jerky and eventually even their own old webbing?