Welcome back intrepid temporal agents! Unless you plan to risk paradox you might want to go back and check out Part 1 and Part 2, before moving forward, but then again maybe you don't care about the consequences ... 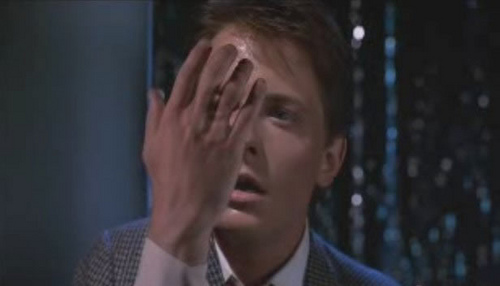 Time will catch up to you

I noted during the first week that sometimes time travel itself isn't instantaneous. That's an important feature in some instances, especially if it also relates to the propagation of changes and the effects of paradox. Sometimes it takes a while for a change to catch up to the time traveler. Maybe whatever they did isn't irreparable, like in Back to the Future where Marty has a chance to make sure is parents fall in love before the changes catch up and paradox erases him.

Of course once he fixes things he is restored instantly, but the argument could be made that that's either movie logic, or the result of the paradox effect being undone. If you liked you could easily have a group of time travelers need an extended recovery period during which they are still under partial effect of their paradox or other edits.

Einstein said that time was relative to the observer. That the faster you go the greater the discontinuity between the time you experience and the time measured by an outside observer. The speeds required a more than we can reach for any appreciable difference (though not for measurable effect, we've done that), but these theories may apply to how long before time "catches up" with the traveler. This would likely be an absolute value so if you travel a year into the past it'll take a year for any changes to catch up to you. Go back far enough and you won't live long enough to suffer the consequences.

Alternately any changes wrought by the traveler might catch up with him at about the same speed that time travel takes. So if moving between time is instant then any changes would be too. Likewise if it took an hour to travel 100 years maybe you have a grace period before your murder of a distant direct ancestor wipes you out.

Alternately though things might be interesting to play with that dynamic. Instant time travel combined with changes that have to "catch up" to the future might allow for interesting temporal chases between past, present, and future. The opposite might also be interesting as it would underscore the importance of being careful with your changes. Step wrong and *poof* you never existed.

So what about the non-time traveler? If I go back and change something will anybody in the here and now know about it? Will the change occur to them without being noticed? Will they experience some kind of wave of edits? Or maybe that is what causes us to have deja vu?

Usually the answer to most of those is "no." The non-time traveller is simply adjusted along with everybody and everything else to fit the new sequence of events. This is the normal state, and it means that when coming back to the present the time traveler will be in a situation where they have to carefully figure out the more subtle changes or ask somebody and risk looking like a lunatic.

There are exceptions though. Those who have traveled time in the previously are sometimes granted a form of immunity, or an ability to sense changes even if they don't specifically have the knowledge of both realities. If it is the former they may remember how things are "supposed to be," while if its the latter they will know that something "isn't right," but not what. These are good ways for GMs to have time travel capable PCs start an adventure. They know somebody else has been altering events and they have to fix them. One way they are likely to know (with a little research) what was changed and needs to be repaired, the other way they may just have a sense that something is "wrong" and the repairs will be up to them to decide on or discover.

There are also those for whom a major temporal shift caused a major change. Similar to the second case above, these people may not understand exactly what happened, but they will have a feeling that something is out of place. In cases where paradox erases the time traveler this may even include the new timeline's version of the person who made the change in the first place. PCs might go from positions of power and authority to being lowly grunts or the poor and downtrodden. Of course without any idea that time travel exists finding a way to right things may be a very long road indeed.

Lastly (?) there are those who are in some way shielded from the changes to the timeline. This could be by mechanisms supporting time travel, such as "temporal energies" that leak from the machinery, Alternately a more physical factor like the very complex in which the machinery of time travel resides is heavily shielded in some way. This might mean that the time travel mechanism becomes a sort of "null time zone" where anybody within will be able to ride out any changes brought about in the past. This likewise opens up story possibilities including ways to get your characters pulled into your adventures.

“So, it wasn’t until his twenty-first birthday that Biff had will have placed his first bet …”

You may have noticed some rather torturous language above, and the truth is that time travel can generate some really bizarre sequences of events that lead to even more bizarre sequences of verb tenses when you try to convey said events. The fact is that telling somebody in the present about something that they did in the past that is still in their personal subject future is ... messy. "Hey Bob you need to watch out, if you keep down this course of actions you will have had caused a paradox if I had have stopped you." That hurt to write, and I'm not even sure if it's technically correct. Suffice to say that when dealing with time travel and verb tenses it's best to keep it simple. Granted that's difficult but that's what you get for messing with causality.

I don't have any more to say on this subject so here is a confused chicken... 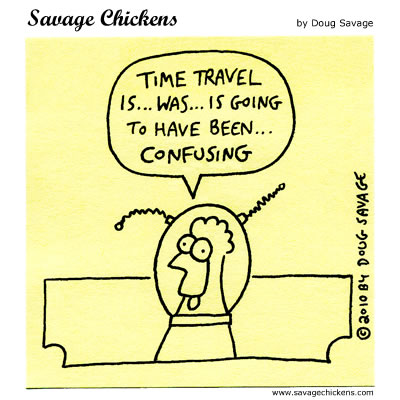 This week is a little shorter than last, but I think the prior topic was one that lends itself to verbosity. We'll be taking next week off from time travel while I do the monthly GMs Roundtable of Doom, but I'll probably be back the following with some talk about the methods of time travel.

As is always the case I am more than willing to hear your thoughts on the matter. Did I miss something? Have I made a mistake? Please let me know. Meantime, for the next article in this series I will be planning to discuss changes to the timeline, and the damage that such actions can potentially cause.