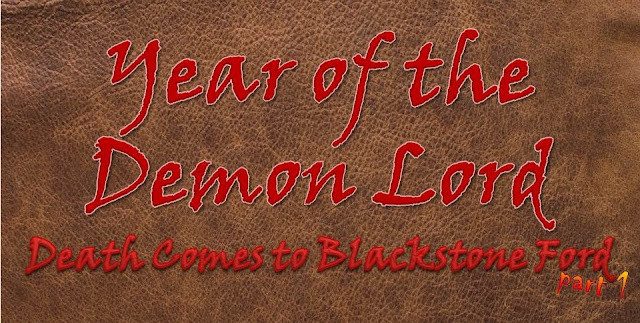 Following up on their arrival in Blackstone Ford, the PCs were blessed with a month of quiet downtime to train, and try and fit into the community...

I decided to run a quick(ish) montage to fill the gap between sessions. I wanted to give the PCs a month of downtime because I didn't want the game to feel like leveling happened without any kind of passage of time. To do that I asked each player in turn what they had been doing during the downtime and then tried to engage another player for some way that that downtime was more difficult or interesting. The result was a touch rough (I kinda sprung this on the players), but I think it worked well and will keep using it between stories.

After a month in Blackstone Ford things had settled down for the group. Aside from the still missing Buckets, Blackstone Ford was an almost idyllic break. Routines had been settled into and things were comfortable for all.

Runt was working guard duty atop the small watchtower. His vigilance was commendable, and he didn't shirk his duty or nod off when tired. As a result when two figures stumbled out of the woods and came running for the tower he saw them instantly. The two men were heaving for breath and clearly scared. Runt was familiar with one of the men named Grek, a woodsman who had gone out earlier in the day to hunt. Grek's partner explained that the pair had been tracking a deer when they found a great pile of bodies.

Runt advised them to go to the inn and find Honon and the rest of the village council. Meanwhile he decided to ring the warning bell. At the inn Sage and Fox were entertaining some of the children when they heard the bell. Sage sent the kids off to find their parents and then decided to investigate the bell. As she and Fox headed for the watchtower they passed the winded hunters and Fox nicked a rabbit snare from one of the men. At the temple Ruedan and Holgar were deep in prayer when the bell went to ringing. They pair checked with Mother Hepp who assured them that she and Sister Vinda could take care of the temple.

Finding only Runt at the watchtower, the group united as the orc informed them of the goings on. Shortly they were joined by a handful of other village men in various stages of readiness. Runt took charge and ordered two to stand guard while he and the others returned to town to find out what to do. They reached the town square at the tail end of the hunters' tale. The council wanted somebody to investigate and the group was willing to do so.

Despite the coming darkness they set off immediately and using torches and candles they found their way into the forest using the hunters' directions. Full dark had fallen by the time they found the site. Rather than corpses they had found a great midden heap of bones. Looking more closely they found that the bones had signs that they had been gnawed and chewed on.

Fox was about to start looking for tracks when they heard a grinding noise. Before they could act a huge bone fiend erupted from the pile. A fusion of multiple bodies worth of bones the creature struck out at the group. Five on one odds did not favor the unholy creature and with group tactics and bolster by Holgar's blessing the group destroyed the creature. Upon its death its exploded, showering the group in fragments of bone before released the tormented spirits of the dead. Ruedan felt that by releasing the souls of the departed, including some of those who had died in the caravan attack, that they had vanquished a great evil.

Sage discreetly cast sense magic to see if there was anything else of magic in the bone pile and was surprised to learn that Fox had a magic item in his possession. Fox meanwhile returned to attempting to locate some tracks. Instead his gears wound down, not once, but twice. Sage wound the clockwork, but first confirmed the location of the magic item, a crystal tucked into one of many small pouches.

Runt finally managed to locate the tracks that Fox had exhausted himself searching for. The tracks belonged to some kind of human-like creature, but nothing that the group could identify. Because it was now fully dark and the group was wounded they decided to head back to the village and rest up until morning when they could track the creature more easily, and hopefully have the daylight on their side against whatever it was.

Session three and the start of a new adventure. I've thought about it quite a bit and given that our sessions are generally only 2.5-3 hours long due to time constraints it is difficult to tell a properly good story in a single sitting. Instead I've decided to split adventures over two sessions. This means that each story can have more meat, but it also means things will take longer. Once 2016 arrives we're going to discuss maybe moving to a bi-weekly schedule if we can swing the timing.

This session I tried something new, both to me and to the players. Since I had declared a month of in-game downtime I asked each player to give me a quick rundown of their activities and then I called on a random other PC to throw a monkey wrench into that story. I think this worked well, and I hope the players think so too. It certainly helps make these people feel like more than just a group of "murder hobos" ...

Looking at my "lessons learned" from last time let's see how I did...


Memorable Quotes (as recorded by the players)

"Corpses... We were hunting... Shot a deer and came upon a pile of rotting corpses," said Grek, a local hunter.
"Did you see a goblin?" Runt inquired.
- I guess the PCs were missing Buckets as much as the players were missing +James August Walls

"What happened, did you trip and knock the bell over?" Reudan asking Runt why he rung the alarm bell when there is no obvious sign of trouble at the edge of the village

"Wouldn't it be better to find new bodies for these spirits?" Fox asked
"Blasphemy!" Reudan shouted back
- apparently the zealous Ruedan has a zero tolerance policy on waylaying souls ... I suspect this may not end well

"We should be rewarded," Fox to the town guards after Ruedan informs them that the group rid the land of great evil.
Posted by Marc Plourde at 1:27 PM