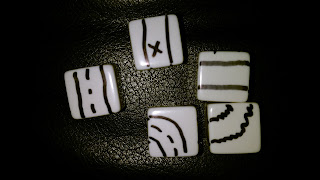 Since I'm alway looking for neat ways to make the game exciting and unpredictable for myself as GM as much as the players I enjoy using certain random elements. I rarely pre-determine loot for instance. For Furry Road I knew that one of the things that HAD to happen was some vehicular combat, including (I hope) people jumping between moving vehicles and fighting atop them. I considered grabbing a roadway map for the geography that the game will be set in, but that's ... boring. Also this is a post-apocalypse game so I didn't want to have stuff too organized. I also wanted there to be an element of the unknown.

I considered first making a deck of "cards" in the form of geomorphic road tiles with important information drawn in or written. I realized quickly that this would work, but that my artistic skills are a little too limited for such an endeavour for a one-shot. I also wanted something a little more exciting than some flimsy home made cards. Enter these... 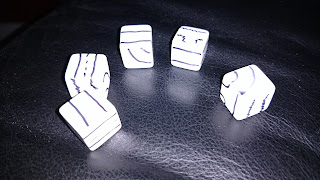 Plain white dice/cubes and a black sharpie marker. You can get 25 of these dice to be for cheap on Amazon, like $8 or so cheap. Add a sharpie and off you go making your own dice. I created three types of road representing normal roads (just two parallel lines), high quality/well maintained roads (two parallel lines with a dotted divider in the middle), and broken roads (parallel jagged lines). These will indicate the normal state, driver's advantage, and driver's disadvantage for piloting tests. I also drew in some turns and a few intersections. Lastly I added a couple of sides with "X"s in the roads to indicate a trap or other hazard (pothole, debris, etc.) that could damage a car.

I pretty much drew 3 or 4 straits of various quality and then added turns or intersections for the other two sides. Five dice later and I can roll up a section of road at random during a highway combat for Furry Road. I'm thinking this will make running combat a little more exciting for both the players and myself.
Posted by Marc Plourde at 12:30 PM

Email ThisBlogThis!Share to TwitterShare to FacebookShare to Pinterest
Labels: After the Bomb, Cypher System, Furry Road