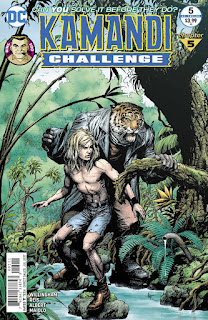 
Where were we? ...oh, right,  fleeing from the Kanga-rat Murder Society!

Remember how I lamented how the prior issue wasted Vila by making her so much a prop for Kamandi's heroics? Oh, how the tables have turned! Kamandi and Vila, riding a monocycle in an attempted escape/hunt from the Kanga-rat Murder Society are in pretty deep. Kamandi swaps places with Vila, having her drive so that he can use the weapons to fend off their attackers. Vila uses this chance to grab narrative control and independence by orchestrating their daring (and maybe foolhardy) escape. Vila drives the monocycle over a cliff and then goes full Groot to protect Kamandi from the fall into the ocean.

When Kamandi awakes some time later they are adrift at sea, Vila using her body as a raft to keep Kamanid out of the water. She tells him that she must go dormant until they reach land, and that he should have enough water to survive. A dehydrated and still hurt Kamandi soon passes out after Vila enters dormancy.

When he next awakes he aboard a tramp steamer run by dogs, having been fished from the drink. Sadly, the crew failed to understand Vila's nature and did not bring her aboard. Kamandi earns his fare by working aboard ship to their next destination. While debarking Kamandi is intriduced to the tiger detective, and former champion wrestler, Raja.

Though Raja has a job preventing him from helping Kamandi find his family he agrees to allow the boy to travel with him for a time. A month passes with a great deal of subtle world building in the form of the stories that Raja tells Kamandi to pass the time. As the heroes near Raja's next quarry, a doctor reputed to be able to cure any disease, they are ambushed by cats riding giant birds. They paralyze and kidnap Kamandi while Raja escapes by jumping into a waterfall.

When Kamandi awakes (again) the doctor is prepping him for a procedure to "prime" his 3D printer of organs for humans, which only requires harvesting Kamandi's organs ...  Kamandi pleads for mercy but when Raja finally finds the lab the doctor has apparently vivisected Kamandi and harvested everything he needs...

So, how does this issue stand up? Well, as I mentioned before Vila snaps back from cliche damsel to heroic female protagonist so fast she probably only avoided whiplash because she's a plant! It's nice to see, even if it's the literal last thing she does before apparently exiting the series. Kamandi takes a back seat here and spends a good chunk of time being a spectator in this world. This works because Kamandi is just a teen and not familiar with the world. Honestly his inexperience with the world has been played with in every issue, but here he finally takes the observant role instead of the action hero role, and it works, allowing the setting to bloom a bit.

As for the setting we get a smattering of stories in part from Raja, that build up unseen parts of the world around. We likewise get a glimpse of several unnamed places, and end in the very high tech lab of the unnamed doctor. It's the kind of general setting development that helps to support the more specific an d detailed world building of the past four issues.

This issue has no faults in my judgement. The art is great, the story is engaging and upends some of the cliche that has been present previously. It also ends with a cliffhanger that is as over the top as that of the first issue, though I think I know how I would "solve" it.

Rating: 100% - By putting Kamandi in the background for a bit the setting and secondary characters get their moment to shine.
Posted by Marc Plourde at 12:30 PM