"Not with a bang but a whimper." WTF?? That's not the way I wanna go out! That's not the Michael Bay or Roland Emmerich way of ending the world. If you are gonna end a world you gotta do it right, and that means blowing some shit up, preferably blowing everything up!! Time for some 'SPLOSIONS ...

OK, let's get to it, and start on the small end of things. Nuclear weapons! Yes, I realize that nuclear weapons are hardly "small scale" but when you see where I go for the big stuff you'll realize that even nukes are tiny. Not all nukes are created equal however, and with 'splosions bigger is better so let's take a look at the Russian AN602 Hydrogen Bomb, a.k.a. the Tsar Bomba, the largest nuclear weapon ever detonated. 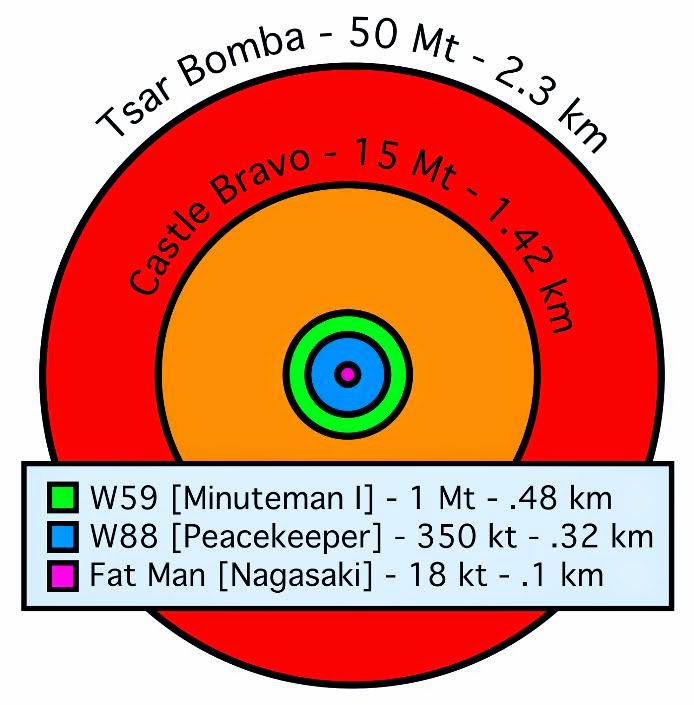 That little infographic on the right shows the relative sizes of the radius of the fireball from explosions ranging in size from Fat Man (dropped on Nagasaki, ~18 kilotons, the center pink dot) to the Tsar Bomba's massive ~50 megaton explosion (red circle). Tsar Bomba was approximately 4000 times more powerful with a fireball 5 miles in diameter that almost incinerated the plane that dropped it (talk about instant Karma).

The mushroom cloud was 40 miles high, that's seven times as high as Mount Everest! With a zone of "total destruction" some 22 miles across and capable of dealing out enough heat to cause 3rd degree burns 60 miles away the Tsar Bomba was equal parts proof and posturing. The Russians were both confirming their design for themselves and showing the US what they had in their pockets (the fact that none were ever built save the test bomb aside). What's more the design's yield was actually dialed back for the test from the theorized 100 megaton upper limit! This device was meant to really take to heart "close only counts in horseshoes, hand grenades, and nuclear weapons" since it was so massive that it would be impossible (at the time) to deliver it with any accuracy.

Mutually assured destruction at the hands of hundreds if not thousands of nuclear weapons. With imagery from Tsar Bomba and the US' Castle Bravo (a mere 15 megatons) the fear of nuclear annihilation was something not left to the imagination, we could see real results. In game terms nukes are usually a MacGuffin device, the means to the end for the villains, and the device to stop for the heroes. Be it a cold war era spy game, or a modern/future setting where a religious war is threatening to boil over into open war. The PCs may be preventing the bad guys from getting nukes, or trying to stop them from being used, possibly by finding and disarming one before it goes off. What's bigger than a really big nuclear bomb? How about an exploding planet? Not just for Star Wars anymore kids. We've seen plenty of worlds go boom. Like the Earth in Titan AE. Or the Earth in The Hitchhiker's Guide to the Galaxy. Or the Earth in Greg Bear's The Forge of God were a massive slug of neutronium and antineutronim annihilate each other within the Earth's core. Hmm, Earth really gets the short straw here. There are no doubt others I may have forgotten or missed ... oh, yeah, like Krypton...

Catastrophic loss of the planet isn't likely something we have to worry about in real life but in science fiction and even cosmic level super heroic fiction it becomes a real possibility. An advanced enough species may seek to destroy a potentially dangerous species before it becomes star-faring, may seek to crack a planet open to harvest it for resources (that the planet is inhabited is usually of little concern), or maybe ne making way for a new hyperspace bypass. The Mechaniods, from the Palladium Books' "The Mechaniod Innvasion" trilogy, harvest the cores of planets to act as energy sources for their mother-ships. That they also get to wipe out bipedal humanoid life in the process is a bonus (or maybe its the other way around). Or as Grand Moff Tarkin demonstrated, sometimes it just pays to make an example (shame for him that his example worked to the opposite effect).

Exploding planet not big enough for ya? How about an exploding star then? Novae and Supernovae are probably the power powerful destructive events we can witness (at least until the Large Hadron Collider recreats the big bang). Technically the mechanics of novae versus supernovae are not the same, but suffice to say that for our purposes an exploding star is a big boom. For our purposes blowing up a sun is the ultimate act of war, and usually the most powerful weapon that a species can bring to bear on its enemies.

Accomplishing the task is usually achieved through the use of a MacGuffin device or substance (trilithium in Star Trek, The Sun Crusher in Star Wars, etc). The end result, usually the destruction of the star and all its orbiting planets (though realistically those planets probably just had their atmospheres and surfaces blown off). There's not one can do about an exploding star, so when it comes to the use of such measures any countermeasure is necessarily a preemptive one. Plot Idea #1: The Bomb
The perfect endgame for a super spy game's big villain; an atomic warhead. The player's know that Dr. ReallyBadDude and his evil organization of evil M.E.A.N.I.E. have gotten their evil hands on a nuclear weapon, or materials suitable for use in building one. Their only choice is a mission to infiltrate M.E.A.N.I.E. and stop the Doctor before it's too late. In this case the nuke is an aspect of the setting until the final scenes/chapters when they find it has already been deployed in secret to a major world city. A race against time to stop a holocaust is always a fitting end to a spy thriller.

Plot Idea #2: Defending Your HomeEarth is under attack and its up to the supers to stop it! An alien warlord, determined to ensure that the last son of his most hated foe is destroyed has opted to blow the Earth up, it seems easier than actually looking for the boy. Depending on the tone of the game the alien in question may be a PC who needs to rally his allies and attack the planet destroyer weapon before it can fire, or they may be a group of capable men and women who have volunteered for a suicide mission with the same goal. These kinds of scenarios thrive on the details. A game were the heroes have 24 hours before the weapon is charged and can fire will play differently from one where the "chaos storm" starts ripping up the planet and will destroy it utterly after 24 hours. If the characters in the second instance are not able to act fast enough there may be little left of Earth even if they succeed.

Plot Idea #3: Total WarThe PCs are on an exploration journey to a new sector. They drop out of FTL in orbit of a dead world circled by a large moon. The system's star is a white dwarf. Exploring the planet reveals that there was life and civilization here before the star suddenly went nova. A bunker deep below the charred and cracked surface reveals the cause of the nova, an alien warship the size of a moon that fired a beam of energy into the star. The characters return to the surface and find that the planets' moon is gone, the weapon was there all along and now its backtracking the hero's to their last planetary stop. Home.

OK folks, go to it, what did I miss as examples? What kinds of ideas of explodey death wold you use in games? When faced with a weapon of such power what kinds of plots do you want to see revolving around it?
Posted by Marc Plourde at 12:30 PM