Gods of the Fall - Session Prep - Finding the Way 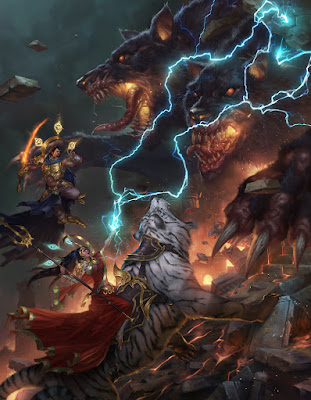 Once again we return to the Afterworld... kinda.

The characters have entered into the twisted and nonsensical interior of The Furnace. Or maybe they simply passed from one realm to another? Uncertainty about where they are combined with confusion about the rules of this place and its doors that lead to other realms has them flatfooted. In addition there are strange beings here who seem hostile in part, and who may be cypher-phages, consuming the divine energy of the cyphers the character bear.

The characters themselves are of course divinely powered and thus contain divine energy, that'll be the crux of this session as the creatures feed on that energy. This is the curse of this traveling space, as it turns mortals who stray too long into these phage creatures. The PCs will encounter some who are far more fargone than others, and may even be able to help the prior party return to the Afterworld and regain their humanity.

I have two main goals for this session:,

The former should be easy enough as the last part of the prior session had them finding the campsite of the last party. I plan to drop clues as they investigate which combined with the behavior of one of the phages/party who has an uneasy truce with the group should point them in the right direction.

Turns out that either I wasn't adequately setting up the "riddle" or it was just a bit too obtuse, but it took the players some time to grasp the fact that the windows and doors were controlled by their wills. They did eventually figure it out, and before frustration boiled off all the fun.

The latter calls back to the characters' trials from their first adventure during their trials within the shard of a past heaven. As divine beings they have the ability, nay the right, to enforce their will on the world(s) around them. This is something I feel strongly is a core theme to games where the players grasp at godhood: the power to change the world to your will, balanced (or not) by the wisdom to know when to do so and when not to.


I needed to take a little more direct approach with this, using a final GM intrusion to have "No-face," who had been following them around and eating their cyphers before attacking and trying to siphon off Polodius' divine power, slip through the doorway they'd opened back to the Afterworld. Removed from the doorway realm the creature vomited up some cyphers as it's body tried to return to normal, but injury and/or the duration of its stay meant that the man perished before he could become fully human once more.