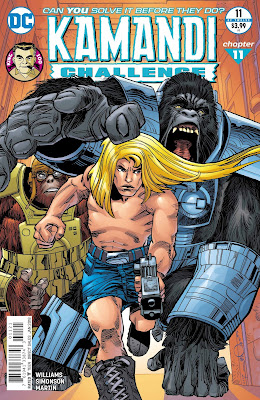 Kamandi Challenge #12 is out today! So let's discuss #11. Spoilers henceforth.


OK, where were we? Oh, right, Kamandi, having just learned that his mother was behind the attempted genocide of the mutants watches as an explosion consumes her. As the rebel mutants storm the keep Kamandi's mother is revealed to be a sophisticated android who then launches the tower skyward.

A running firefight begins while Kamandi attempts to reach the bridge and hopefully stop the tower from flying into space.  By the time Kamandi arrives at the bridge however they have already reached orbit and are approaching a strange space station ruled by the Misfit, a strange creature that claims to have Kamandi's parents.

As the gulf to the station closes Kamandi desperately attempts to stop it. In doing so he opens the ship to attack by the Gorilla UFO Squadron. The gorillas board the tower and Kamandi pleads with them that he is not their enemy. The Misfit opens fire on the tower rather than risk the gorillas reach his Tek-Moon base, and Kamandi is blow into space when the ship is breached...

There's a lot to unpack in this issue. High tech androids that can pass as humans effortlessly, URO flying gorillas and an orbital space station ruled by the Misfit, who's origin is still unknown. Kamandi's mother appears to be dead, but the Misfit says his father is still living, but as we know that the shift in writers can lead to unreliable narrative (in a matter of speaking) it's unclear how much of that is true. From a world building standpoint we also get an in-fiction map of the world matching that of the original run of the comics.

Story-wise this issue raised as many questions as it attempted to answer, including who or what is the Misfit, what's going on with Kamandi's parents, and where this will all end. Of course it seems destined to end on the Tek-Moon and we may yet find one or both of Kamandi's actual parents alive. The ultimate fate of the world seems to be in the balance as well, with the Misfit's goal seeming to be the destruction of the mutant animals. Art-wise this issues was good to excellent with clear action and interesting design for the Misfit.

Overall I think this was a fine set-up to the finale. It raised a number of questions but I think (I hope) that this can be wrapped up in a final issue that will satisfactorily close out the series.

Rating: 85% - As a penultimate issue it sends the narrative to a potentially interesting final destination. 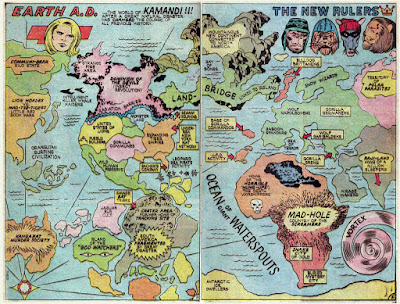