Gods of the Fall - A Nod to Dreams

Tell me all your thoughts on Nod...
(no apologies at all to Dishwalla, some apologies to my audience however)

In case you haven't already come to this conclusion let me lay it out for you: Nod is weird.

It's a dreamworld rendered physical, of course it's weird, but that's hardly the weirdest bit. I've been thinking about Nod recently, wanting to start a series within the series on some of the locales of the Afterworld, and Nod is proving very weird. Consider this, it blocks out the sun at all times for the Nightlands, and only for the Nightlands. This means (or may mean) that it moves through the sky, but it moves in a very specific way as to only block the sunlight that would fall on the Nightlands. It's there from sun-up to sun-down, preventing the light from reaching that cursed land.

It's magic, right? That's the easy way out, and it certainly applies, but really stop and think about it. Nod never allows sun to land in the Nightlands, but all you have to do is step beyond its very well defined shadow and "Bob's your uncle" there's the sun. A celestial object just doesn't work that way, so yes, Nod is weird because of magic, but that doesn't answer anything. Is Nod always visible? At night do you look up and see Nod just as you do in the day? Does it wax and wane or is it just a constant orb casting shadow upon the Afterworld?

And what about that shadow? The way Somorrah is described even when its light side is in daylight the dark side is dark. Not just shadowed, but dark. So is Nod casting a shadow at all, or is the darkness purely a magical effect? A curse that swallows the light? And in the process of swallowing the literal light, is it also swallowing the metaphorical light? Is the darkness of Nod responsible for the moral darkness of the Nightlands?

We know that Nod is the land of dreams and that the King of Nod is/was the god of dreams/sleep from before the Fall. We know he survived by divesting himself of his divinity and that as a result Nod is stuck where it is as the result of some ancient curse. These are the completely facts that the book present, but GMs are free to use or ignore these at their own desire. I'll proceed forward assuming you intend to use them.

Nod isn't described as a place of dreams alone, but one of "nightmares and dreams" and it seems that the emphasis there is on nightmares. Nod, and its King, seem to have fallen towards darkness as a result of the Fall. I say this as he is stated as god of dreams not god of nightmares, but who knows. Maybe this is why Nod's shadow has created such a twisted and morally bankrupt land, or why it has fallen on a land that became thus. Perhaps if the King of Nod were to find his own better self Nod's shadow may change, or perhaps it is the nature of the supposed curse of "eternal darkness and night" that caused Nod's "fall" that has twisted the King of Nod into who he now is. Lifting the curse and saving Nod may be intertwined.

Alternately maybe there is another realm of dreams out there, a pleasant land that was cast adrift in the Aether, or otherwise lost during the Fall. Maybe there is more behind the Guild of Sleep's war on Nod than most people know. Does the Guild have information they hold in secret, or perhaps backing from powerful entities that have goals for Nod that we do not know?

Nod is weird and it presents a lot of setting potential even for characters who never venture there and GMs who never intend to use it. It may also represent a deeper layer of how the Fall affected the world and continues to do so. I think decoding Nod's truth is something best left to each GM, but think that that truth is all but guaranteed to be of profound influence on the setting. So ...

Tell me all your thoughts on Nod, 'cause I'd really like to read them...
Posted by Marc Plourde at 12:30 PM No comments: 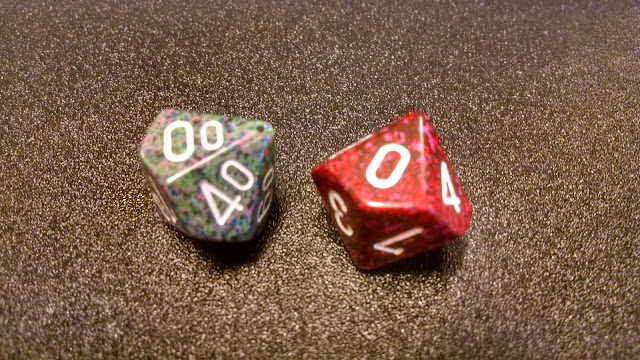 What's your take?
Posted by Marc Plourde at 12:30 PM No comments:

Story Seed - Amid the Ruinscape


The snow crunched underfoot. It sounded like a child taking a bite from a pastry. The air was cold, crisp, and dry and carried the sound cleanly. I stopped and waited, listening. No other sounds but the whistle of wind among the ruins. The last cries of a dead city.

The snow and ice had penetrated this place deeply. It stuck between the stones like mortar, and coated boulders like moss. This place had been locked away in the frigid cold of the north since before the Fall. I wondered if perhaps it had been frozen here since before some prior Fall. Did the long dead citizens of this place worship gods whose names would never be uttered again? I didn't know. I would probably never know, which cast strange doubts in my mind. How could there be knowledge that the God of Knowledge did not know? Or did lost knowledge cease to be knowledge at all?

I shook myself out of my reverie and checked the crystal again. An artifact or cypher, I wasn't even sure which - so much for the god of knowledge! - the crystal was pointing me toward something. It had been leading me here for months. The bar of light drifted left and right as I moved my hand, the movement was ever more exaggerated as I had neared this ruined place, and I knew my goal was close. I followed it once again, allowing it to lead me toward whatever fate it held.

After an hour I found it. The ruins of an old building. A temple perhaps, or a library, or both. I liked it, the style was simple, clean, appealingly functional. I meandered for a bit, picking through the rubble of a collapsed room, before continuing to follow the direction of the crystal. It led me to a large table, the altar I supposed.

It was covered in ice and snow. Entombed. I prepared a spell, laid the energy out in a diffuse blast that melted snow and liquefied ice and in moments the altar was cleared of water that had fallen before I was born. I waited for the steam to blow away, or re-freeze and fall once again.

Then I saw it. Laid into the altar, gold and silver, a symbol. A book and a scroll in the hands of a human shape. My symbol. Partly chosen, partly gifted by fate. I began to wonder the nature of the Falls, and just how cyclical the rise and fall of the gods truly was.
Posted by Marc Plourde at 12:30 PM No comments:

Posted by Marc Plourde at 5:34 PM No comments: