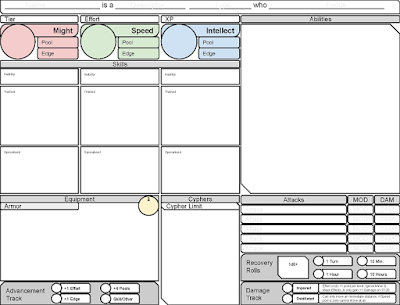 My Cypher System Character Sheet is nearing 1000 views! When you consider that most of my posts struggle to see 100-150 views that's a pretty darn big deal in my book. Big enough of a deal that I wanted to go back and do some re-work on the sheet and make it better.

The catch, I don't play much Cypher in person and so I haven't been using the sheet regularly (online play means I just use a text doc).  What I'd like is some feedback from everybody out there on how to make this sheet better. Right now I plan to do away with the columnated skills and just have space for Inability, Trained, Specialized. I'm planning to do that since the skills really aren't beholden to the stats, some skills will fall across more than one pool, for instance. BUT, if you disagree, let me know.

So let me know what you think could use a little tweaking, even if you are only just now finding this for the first time.
Posted by Marc Plourde at 12:30 PM No comments:

Rant: My Thoughts During the Savage Worlds Rifts Kickstarter 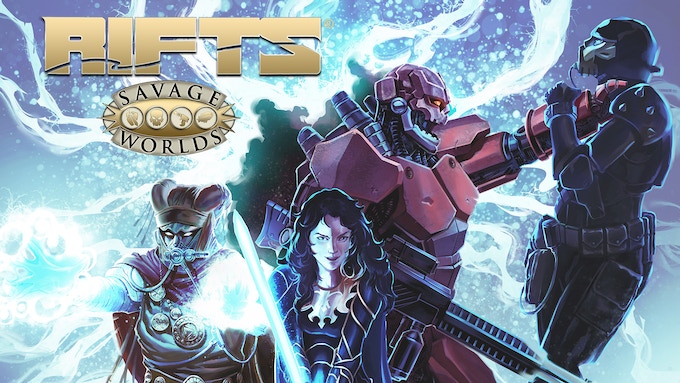 I'm going to say this upfront: I have not backed the Kickstarter, and I don't know if I will.


Author's Note: I did throw $1 into the pot so I could keep abreast of the updates more easily, but I hardly count that as "backing" it.

I'm also going to say this: Rifts is what made me a gamer.

Yup, I have a history with Rifts. I've copped to it, and I've also shied away from it at times. It's a complicated property for me on a personal level. Without Rifts I may never have done more than skim the fringe of the hobby and ricochet off into some other part of the gaming world.

You see the first RPG I ever played was some variant of D&D, I know not which, and I can't honestly that I had fun, but that's just because I don't recall it clearly. I was in elementary school and I think I just didn't get it, but it certainly didn't register as a thing. Fast forward to middle school and Rifts. It was like shooting fish in a barrel I suspect. I just didn't stand a chance against a game with wizards and robots and power armor and cyborgs and EVERYTHING. The setting grabbed me too. You could eke out a post-apocalyptic life in the ruins and wilderness, or play cyberpunk style in ChiTown, or perhaps you could travel the megaverse and see all the weird that there was out there. I was hooked from the cover really.

Rifts, by its very nature is/was as much shrewd marketing as it is a cool game setting. It essentially retro-converted all of the Palladium catalog into supplements, and during those first few years when supplements were few and interest was high Rifts helped me discover TMNT & Other Strangeness, Ninjas & Superspies, Heroes Unlimited, and more. Even when we didn't play Rifts my friends and I were playing the games we were because of Rifts.

Looking back now I don't have many "that was so cool" memories from Rifts itself. Those memories from that time come from the TMNT alt setting After the Bomb, or running my friends through Ninjas & Superspies adventures, or the weird superheroes you got out of random power assignment in Heroes Unlimited. So while I can't point to very many discrete Rifts memories, I also know that Rifts helped to make those others possible.

I think my exposure to the Palladium house system also explains why when I played AD&D 2nd Ed in high school I disliked it. THAC0 was counterintuitive and confusing. Memorizing daily spells felt lame after running around with a pool of PPE I could use to fuel whatever spell I needed at the moment, and why did D&D Psionics suck so much? It was like owning a Ferrari and having somebody try to sell you a Datsun. At least it felt that way at the time. (Author's Note: I still hate Vancian magic.)

The Palladium house system started to lose it luster in college as I got exposed to other games. White Wolf's Storyteller system seemed so much faster and more elegant (and better balanced) for instance. But that didn't stop me from forming a new group to play with. A group that I never bothered to show Rifts to. Instead we ran Palladium Fantasy, which had an interesting setting and used the rules I knew way too well (at one point I had the stats for the common spells memorized outright).

Since then I've not really looked back. There's been other games and other systems that have come and gone, and while I still have very fond memories of a lot of Palladium's properties (Nightbane remains a favorite setting of mine and TMNT's Transdimensional TMNT is a favorite supplement) Rifts has faded in mind.

When the Savage Worlds Rifts project was announced my first reaction was astonishment (as I suspect was similar for many folks) because Palladium's history with allowing their IP to touch other companies was both limited (Rifts Manhunter) and storied (let's just say it was tough to be a fan at times).

So here we are, it's happening and it's funded. I've seen pre-release reviews (like this one) and the art direction is certainly appealing, and I've played Savage Worlds a few times and it seems a decent enough set of rules. All of this is encouraging. And yet I can't help but be reminded that for me Rifts wasn't a game of great early gaming memories, but instead it was (somewhat ironically) a gateway to finding other games that generated those memories. Without Rifts I'd never have escaped a nuclear explosion in a hot air balloon, or seen what happens when a cocky player rolls 100 while trying to avoid a freeway sign at 80mph on the back of a trailer truck. I'd probably never have rolled one after one after one while fighting a dragon, or run through an almost continuous 24 hour game session in college.

If I back this Kickstarter it'll probably be more for the hope of seeing other Palladium settings converted to non-Palladium rules sets then it will be for Rifts itself, and in that respect I hope it does well. I also hope it does well because even if it never gave me those great memories directly it is directly responsible for my being in this hobby, and finding those other games. And also Rifts is a pretty great setting idea, it's over the top and crazy, and maybe no longer my cup of tea, but it's a good thing that it has this chance to maybe grow its fan base by jumping into a new set of rules.

At any rate thanks for reading if you made it all the way through this rant. I had to get these thoughts off my chest, because I found it weird how unexcited I was. I think I get it now, and I really do hope that this goes bananas for the Rifts fans, and for those of us (or maybe just me) who would like to see other Palladium settings get new treatments.

Addendum: Now that I've had time to think on what I wrote here I realize that while I think I always liked Rifts in concept I rarely found it worked out in execution. More to the point, I now realize that most of my "warm n fuzzies" with regards to Palladium come out of their other game settings. I think I can probably safely say that unless I feel there is enough new setting material to be worth my while I'll not back this in favor of falling back to my current library of Rifts titles.
Posted by Marc Plourde at 12:30 PM No comments:

Excerpt from the introduction to "A History of Temporal Travel" third edition:

First of all, let me just get this out of the way, yes, time travel is possible.

Secondly, time travel is either extremely difficult or appallingly easy, depending on which way you do it.

Thirdly, and you probably already figured this out, but mistakes do happen.

We don't know when the technology to travel time was first invented, or discovered, as chronal navigation was subject to multiple thefts and subsequent anachronistic temporal inceptions. As a result we can only say that the technologies eventually came to crop up in the opening decades of the twenty second century at which point further anachronistic inceptions were impossible by virtue of lack of the fundamental prerequisite technologies.

More problematically there are unique people who, for reasons not well understood, find themselves no longer fully bound by time's flow, and exhibit strange abilities that seem supernatural to the unaware. A few of these rare individuals show evidence of being able to eschew the normal technological trappings normally required for chronal navigation.

With regard to the so-called "timeline," as you will learn time is not a line, but a woven tapestry of events with multiple outcomes. Many of the lesser inflection points create only minor disturbances that a quickly reintegrated to the "prime" sequence, while major events spur offshoot sequences that may take considerable time to converge, if indeed they ever do.
Posted by Marc Plourde at 12:30 PM No comments:


Did you watch Cypher Live last Sunday? If you missed it fear not! It's on YouTube!
Posted by Marc Plourde at 12:30 PM No comments: