It was nice while it lasted. Nine years. Nine years after it began the Gre-Vakian c trial went off rails when the machinery that connected the commuters to the future stopped working.

SATI discovered a method to travel time, but that method was one-way only. You love travel forward or backward from your starting point, but you couldn't go back without having access to the same or similar machinery at which point it once more becomes a one-way outbound trip. SATI's tech couldn't retrieve an object or person from another point in time.

Why do I think this? Well it's simple really; if they had the means in the future to retrieve persons and objects from the past why would they invest in the infrastructure of buildings, power generation, and machinery to build a time travel facility in the past? Housing for commuters, lab space, and the like would require a great deal less effort than building a massive time travel apparatus. The very fact that there was time travel machinery sent to, and constructed in, the Cretaceous is evidence enough for that technology to be limited to sending commuters, but not retrieving them.

As a result of the one-way nature of their time travel technology any expedition to the past was a virtual death sentence for the commuter without the machinery in the past to send them home. Trips to the future are easier since one can safely assume the tech will still be there. So when the Last Commute disabled the machinery in the Cretaceous era it prevented the commuters from returning to the future, but the future should have been able to send help back.

Unless the future was gone.

I think that the commuters of Predation's Gre-Vakian c trial are the victims of paradox. Their presence in the past has altered something. Perhaps it is the tampering with animal genetics that changed the very course of evolutionary history on earth, or perhaps the commuters stop the impact of the comet/asteroid responsible for the Cretaceous–Paleogene extinction event which, I can safely say, would probably have some repercussions on the future.

Regardless of HOW they caused it, the commuters accidentally altered the future and erased their history. Obviously this creates a significant paradox, the least of which is that you can't go home to a future that doesn't exist, nor can that future send back help. The result: the machinery of time travel failed spectacularly and has been impossible to repair since, because the future the commuters are trying to return to doesn't exist anymore.

I guess it's true what they say: "You can't go home again."
Posted by Marc Plourde at 12:30 PM No comments:

Author's notes: Once more we have an instance of a character that doesn't need much heavy lifting to align their species to the final character. Raccoons are mostly known for being nocturnal scavengers who are rather curious. I decided to buy Specialization in Perception to make up for the lack of a night-vision power, but it also doubles as keen smell and hearing. Certain mentions associate them with a habit of procuring shinies in the same way magpies do. As such Gluttonous Explorer who Scavenges seems a good fit here ...
I should note that Gluttonous is found in Gods of the Fall (p. 126), and Scavenges is found in Expanded Worlds (p. 55). 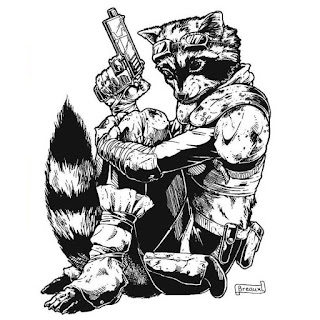 Jim the Trash Panda (Raccoon) is a Gluttonous Explorer who Scavenges

Initial Link to the Adventure: Your greed can be sated only by taking on dangerous tasks in return for great rewards.