There's a new episode of Cypher Live tonight! We'll be talking about GM Intrusions for the whole hour. Stop by and ask your questions to us live.
Posted by Marc Plourde at 12:30 PM No comments:

Hey folks. Just a quick update on my projects.

At the moment things for the blog are on hold while I work on my next article for the CypherCaster Magazine. It's going to be a discussion how to hack the Cypher System to make slightly more detailed ships for use with science fiction games *cough*Star Wars*cough*. If all goes well this will be done in early May and in the next issue of the magazine. I'll let you all know when that gets published.

Shadow of the Sea Lord is still in works but behind the curtain so that my players don't know what's coming before we meet and play at GenCon this year.

My next one shot Cypher System game is going to be an action crime story featuring demigods based on a mash-up of the Percy Jackson series and Die Hard with a Vengeance. Demigod with a Vengeance will probably be in late May or early June, and I will likely run it live on air again.

Beyond that I am still considering what I want to do for the back half of the year. Fridays will continue to be largely for the use of these projects, but you may see other random updates on some weeks.
Posted by Marc Plourde at 12:30 PM No comments:

All of those and more brought this idea to bloom. I hope you enjoy, and if you ever use this please let me know if you did.

Doors at their most simple are amazing things. They are portals between two places that can allow or bar passage between those places. However, some doors are more than simple passages through walls into adjacent space. Some doors breach the barriers of space, time, and even cross dimensions. With the right door, and the right key, a single step can carry you to new places, new worlds, or even new states of being.

You have studied doors extensively. You understand how to find doors that are hidden, open doors that are barred, and know how to travel the secret paths between doors. With enough training you can connect even forge new connections between doors no matter how far apart they are.

Connection:
Minor effect suggestion: You forge a connection to the target door, and can find it without fail for the next 24 hours.

Major effect suggestion: You gain a moment of insight into the ways between doors and learn the true location of a door previously unknown to you.


Skeleton Key -  You have a key that you created yourself. It can change itself so as to fit into the lock of any door so long as that door uses a key. If lost or destroyed you can create a new key with 8 hours of work and appropriate materials to craft a replacement. Enabler.

The Key Opens the Way (2 Intellect) -  Using your Skeleton Key you can open any locked door so long as it's lock possesses a physical key. This ability will not work for doors that use passwords, codes, biometrics, telepathic locks, or other more exotic forms of security. Action.

A knowledge of locks. - Your experience with locks has grown substantial. Your key only opens locked doors, but you don't let that stop you. You are trained in all tasks related to opening locks. Enabler

Navigating the ways. - You have looked for the hidden doors & keys that open hidden ways through space, time, and dimensions. Doors no longer bar your way but instead grant you access to all the places you wish to visit. You are trained in all tasks relating to finding and identifying doors, and navigating the secret paths between doors. Enabler.


Open the Way (5 Intellect) - You use your Skeleton Key to open a door and in so doing you ply your will to open a way between this door and any other door within 1 mile that you know of. The way remains open until either door is closed again. Alternately if the door in question is attuned to another door, regardless of distance or location, you can open the path to that location. Action.


Specialized with locks. You are now specialized in all tasks related to opening locks. Enabler.

Sense the Paths (3 Intellect) - You can spend a moment attuning yourself to the energy of the ways and sense any doors attuned to paths linked with other locations within 1 mile of your location. Action.


Follow the Way - The range of Open the Way increases to any door on your world that you know of. Enabler


The Infinite Door (8 Intellect) - You use your Skeleton Key to open a door creating a pathway through space to any location you know the name of within your solar system. For each level of effort applied you can increase the distance (1 level of effort for anywhere in the galaxy, 2 levels of effort for anywhere in the universe), or you can breach dimensional barriers and open a pathway to another reality (the GM determined the exact amount of effort required to access the target dimension) . Unless you have the name of a specific door, or have personally been to the target location, you cannot choose exactly what door you will exit from. Action.


The doctor walked through the facility. It was warm in here, and he basked in it. The vats needed to be kept at body temp, and it was easier to keep the entire growing floor close to that then to heat each vat separately. The station's habitat levels were on the outside and often felt cool, even cold if the planetary weather turned foul. As a result many of the med staff found the vats to be a pleasant reprieve from the habitat areas. Management didn't mind at all that people gave themselves an additional incentive to report to work.

The doctor turned down a gangway and entered the roughly spherical enclosure of a pod of life. The pad in his hand linked to the local macrocomputer and updated the charts. Of the twenty vats, seventeen were on schedule for birthing at the end of the month. One chamber had already faulted and been disposed of. That left two that stood out.

The first was showing quickened development and might be ready for decanting a full week early. The doctor tapped a few notes into his padd and highlight subject sixteen to have an additional DNA screening and a full process review. Even a 5% reduction in incubation times would be worth reporting if it could be factored and applied globally.

That left subject nine. The doctor studied the readouts once more, a frown hidden by the filtration mask he wore. Subject nine was almost four months behind intended decantation schedule physically. The DNA modeling had showed a transposition error at the sixteen cell divide that likely caused the slow development. What was interesting, and the sole reason that subject nine had not yet been aborted, was that mental development was far exceeding the projections.

Computer extrapolations showed that subject nine would birth after a seventy percent longer incubation period, but with a mental development nearly an order of magnitude farther along. More to the point were the strange cortex formations that had even the geneticists baffled. Whatever unique mutation they had here, subject nine showed promise for exceptional mental acuity at the very least.

The doctor pressed a sequence that momentarily overrode the local video surveillance. He took off his right glove and put his hand on vat nine. "Good morning," he said, seemingly to himself.

Good morning father, how are you? subject nine replied telepathically.
Posted by Marc Plourde at 12:30 PM No comments:

A new CypherCaster Magazine is now available! I've got an essay about making the cypher limits feel more integrated into your games. Please check it out and if you would write a review and let us know how we're doing. 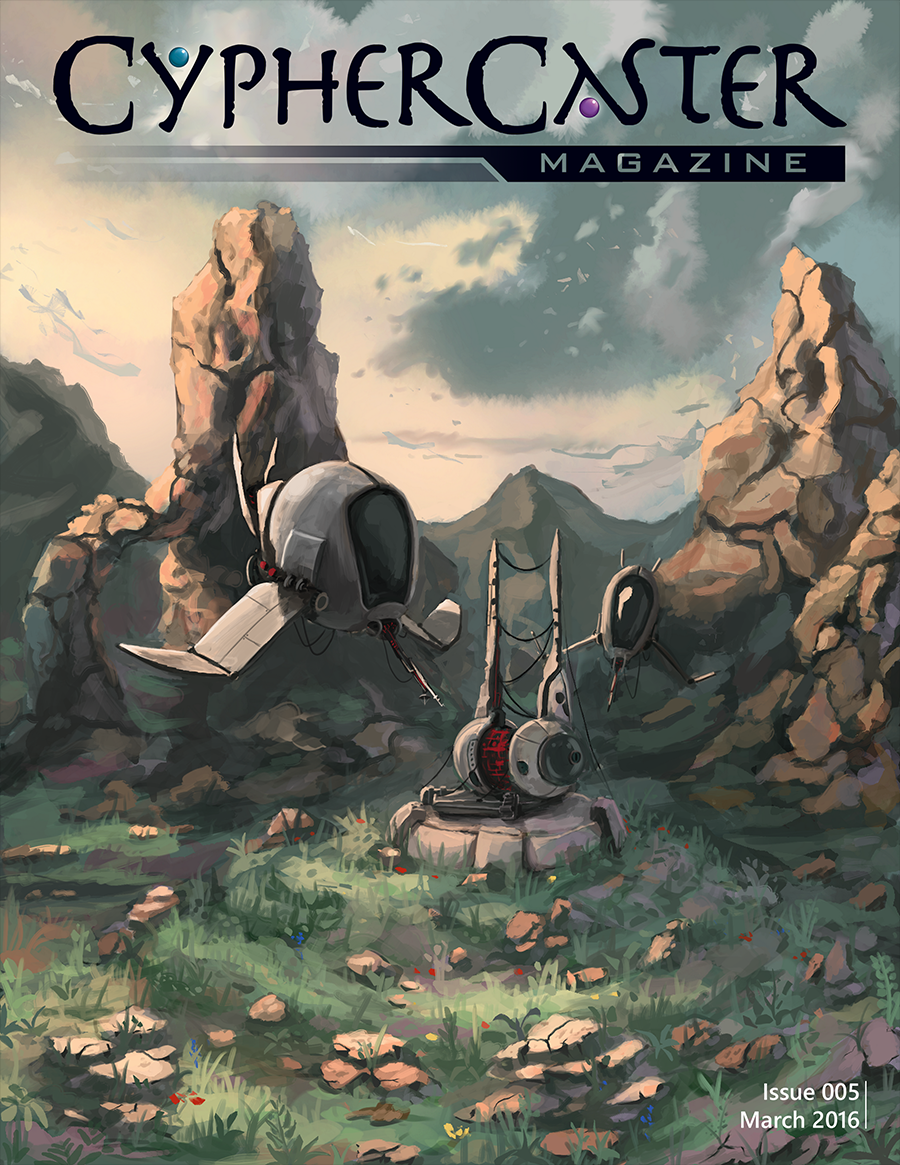