Shadow of the Sea Lord - Leaning into Trope


Shadow of the Sea Lord is being planned as a con game for me to run for some friends at GenCon this year. Knowing that pacing is pretty important, especially in a con-game, I really need to start strong so that the game can find it's feet and flow through the story in the time allotted. Rather than try and come up with something innovative and new, I decided to lean into trope, to put the convention into a con game:

I plan to start in a bar, with a bar fight.

Why not right? The trope of an adventuring group forming out of a bar isn't a bad one, just one that got a little over used. Likewise a bar fight in a game set in the pirate city of Freeport isn't exactly going to come as a surprise to the players, its pirates in a bar after all. But there's something to be said for convention, for the familiar.

The nice thing about both of these is that you can get almost every type of character into a bar without any real effort. Bars, inns, and taverns, common rooms all, were the center of social life in the historical period that fantasy tried to emulate. Having four to six characters with disparate backgrounds all start off in a common room is both plausible and a good way to establish to the players that some kind of setup for the larger story is forthcoming. They know the trope, and they play along, and you get to jump quickly into the game.

As for the bar brawl ... There's value in setting up a situation where the characters can quickly establish that they are, more or less, on the same side. It helps build the party of good footing, and ensures that there is reason for them to stick together. Plus Freeport is a pirate city, and pirates can be boiled down to a handful of key tropes, of which bar fights is just one. It helps to sell the setting, and allows the GM to get the players exposed to a combat early on. Again, this will build trust within the team, but also allow the GM to showcase the mechanics early.

That's my plan anyway. My players may well read this so they may well know what's coming, but I think, I hope, that this will still work as intended, and facilitate what I am hoping will be a good game.
Posted by Marc Plourde at 12:30 PM No comments:

On the one hand you have games in the classic tradition, where each race has a template that grants bonuses and penalties to attributes and bonus abilities and weaknesses. On the other hand you have games where race is no more than a background trait of your character that has no mechanical influence on play. There's also a third hand (woah, freaky) where character race a little more ambiguous.

Like the Cypher System. In Cypher every character fills in the blanks of "I'm a [descriptor] [type] who [focus]." Race has been handled differently in each of the Cypher System games. In Numenera non-human "visitant" races used special descriptors to cement their status and grant them their "templates," such as Varjellan, and Mlox. In The Strange character's could adopt most any race available for the recursion they were visiting, but if they wanted a racial power set it came in the form of foci tuned for that race, like "Embraces Quephilim Ancestry" or "Abides in Stone."

The Cypher System Rulebook takes two tacts for race. On the one hand it suggests that any of the descriptors can in fact indicate membership to a different race (see sidebar pg 89). A dwarf might be Strong, an ogre might be tough, and a elf might be graceful. These descriptors, these adjectives, can easily tag the special traits of another race as easily as they can that of a specific human. Alternately, for campaigns that play specifically within fantasy worlds it suggests that one could generate specific racial descriptors (see pg 243) much in the way that Numenera does.

But there's a third option that I think is legitimate and yet different from these two (though similar in ways to the sidebar suggestion). Race and racial abilities can potentially be taken from any source, descriptor, focus, and even type.Consider a typical halfling, they are small, affable, stealthy, and often well known for having an innate affinity for thrown weapons.

You could easily make a Stealthy Speaker who Throws with Deadly Accuracy. Each of these choices, and the choices made within the Speaker type can give your character a small portion of the typical traits of a halfling. Stealthy is obvious, and the first tier of Throws with Deadly Accuracy alone can cover the natural affinity for thrown weapons; add Enthrall and some training by way of the Interaction Skills ability and Speaker can easily cover the halfling's talent for tale telling and generally affable manners.

OR you could be a Charming Warrior who Works the Back Alleys. Grab the Pierce and Quick Draw abilities from tier 1 warrior to make your thrown weapon attacks faster and more damaging. Or maybe you're a little more of a homebody halfling only just starting out, perhaps an Appealing Spinner who Doesn't Do Much. Sure you're probably not the best suited for adventure, but then Bilbo wasn't either and he got by. Don't forget flavors as well. You always make up for lack of stealth from your descriptor, type or focus by taking some aspects of the Stealth flavor like Legerdemain and Stealth Skills.

What about a troll mage? How about a Tough Adept who Regenerates Tissue (borrowed from The Strange)? Seems like a good fit with the right Adept abilities to stand in for "spells". How about a World of Darkness Style vampire? That's tougher because of the breadth of vampire types in WoD, but a Charming [type] who Siphons Power might work with a little tweaking of the Tier 1 and 4 abilities from Siphons Power (since vampires can't take power from machines, and cannot take power at range. Use the Customizing Foci options and at Tier 1 grab Training in a skill, or maybe just 6 more pool points. At Teir 4 Incredible Health and Fusion Armor could both fit well within the paradigm of a vampire depending on the specific flavor of bloodsucker.

Rather than force any one portion of your character choice to speak to your race, or ignoring it altogether, you can build your race into your character by canny choices of descriptor, focus, and/or type. The best part about this is that you can run with crazy ideas. My freind +Jeremy Land is playing a werejackal in +James August Walls Cypher Fantasy game, using powers from his focus (Wields Two Weapons at Once (his clawed hands)), and his type (Sculpt Flesh from the Adept type to create his claws). It's a brilliant way to envision a character concept that is complex in a way that isn't just laid out for your use. He's gone steps further and uses Reveal to grant himself and others darksight by "transferring a small amount of his lycanthropy" to them.

The same strategy can apply to science fiction games as well. Maybe you have a wookie who is a Strong Warrior who Pilots Starcraft. Perhaps you want a Klingon; how does an Honorable Warrior who Master Weaponry sound? The sky's the limit here.

This technique isn't limited to Cypher System by any means, so next time you are working with a "universal" or "generic" system (terms which I find less and less accurate the more RPGs I play) consider that race and racial abilities can come from any number of sources within your system. Think about where skills that you choose can act as skills that would be granted by your ancestry, and how easily abilities you pick can fit the needs of abilities gained from your ancestry.
Posted by Marc Plourde at 12:30 PM 1 comment:


"There!" Callun pointed through the glass at the broken landscape below. The skimmer was flying low and slow over the landscape as the occupants searched the terrain below.

"There what? I don't see anything."

"The text said the temple used to be the source of the of the river, and that the river used to run through two great spires."

"And, during the Upheaval the land changed a lot but I think that and that could have been the spires before the upheaval."

"But the river is flowing the wrong way."

Callun shook his head, "Not if the land fell during the Upheaval, that could change the flow of the river."

"OK, well, the river flows into the Shattered Lands, so if the temple still exists that's as good a place as any for it to be hiding." Kile banked the airship into the jagged rocky teeth that jutted upward from the ruined plains like a forest of earthen trees.

Hours later Kile let out an excited cry, "Callun, look at that!" Below amid the broken and shattered remains of a once proud mountain was the great soaring vaulted walled of some ancient structure.

The skimmer drifted down, thrust and lift power at minimum. The orichalcum propulsion plates only barely pulsing with arcane power. The pilot guided the craft with a deft hand, fingers dancing through the spectral control fields that distributed power from the energy collectors. The craft settled to a soft landing, only the barest trace of power leaking into the lift plates, allowing the craft to balance on a pair of delicate spars.

The rear hatch pivoted open on a central axis and two figures emerged from within. The looked upward, beholding the full size of the great temple before them, its open doors gaping like a great maw.
Posted by Marc Plourde at 12:30 PM No comments:

Friday
Shadow of the Sea Lord - Interesting Things in Freeport 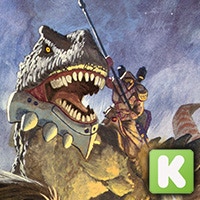 The Worlds of Cypher System Kickstarter is going gangbusters with 7 stretch goals down and still almost 4 weeks to go. Check it out!

My co-hosts +James August Walls and +Ryan Chaddock are finally going to dive into the Cypher System Rulebook's newer rules later this month. Join us for Cypher Live on Sunday March 20th. We're going to talk about stuff like Power Shifts, Horror Mode, Insight, and more.