Predation - A Before B and Also C


Why "c"? These things aren't arbitrary. Large corporations like SATI have rules that govern everything internal. So the Gre-Vakian c trials that brought our PC's ancestors to the cretaceous era were almost certain preceeded by Gre-Vakian a and b trials. But what about those trials? Very little is even implied, let alone said, of them, and their existence isn't confirmed, just conjecture based on a logical presumption.

The "a" trial was probably the prototype phase, or the phase immediately after that. The commuters from the "a" trial clearly either failed in whatever mission SATI set forth (very possibly the same mission as the "c" trial) or had another mission entirely. I'm going to choose to think that they probably had a different mission, as SATI sending two groups of commuters back in time and then opting for "third time's a charm" seems a bit forced. So what was the intent of the "a" trial? Infrastructure.

Consider that the Last Commute has been described as a failure of the machinery in the cretaceous. This seems reasonable at face value, but give it some thought and you realize that there must be more to the story. I got into that last week, but suffice to say I think that the Last Commute was the result of Paradox biting SATI square in the butt. I think that SATI's time travel was one way; you can send but but your cannot retrieve. Trial "a" was very likely concerned with getting equipment in place in the past to verify that return trips were even possible. Imagine being part of the "a" trials and knowing that if the tech didn't work you were dino chow!

My guess is also that the "a" trial was very small scale. A small group of experts and technicians and the mechanism to send them home. A proof of concept that only barely counted as being a trial at all.

What exactly is SATI up to in the past? We may never know, unless we are the GM, or the GM chooses to reveal that to us in the game we play in. Or is Shanna writes a Predation novel. A novel with awesome dinosaurs ... I'll try and suggest that at Gen Con this year. I digress, while we may not know the point of SATI's expeditions we can make certain assumptions.

Assumption: The "b" trial was either a failure, or had a different goal from the "c" trial.

This seems pretty reasonable. SATI must have a reason to be sending thousands of its employees back in time. So either "b" failed but a "c" trial was still positive on the old risk vs reward analysis or "b" was doing something different from "c".

Assumption: The "b" trial was located elsewhere (or elsewhen) such that the "c" trial would not find evidence of the prior trial, or run into and interfere with the prior trial.

Assumption: The commuters of "c" trial were not in any danger from "b" trial, nor were they required for "b" trial as such.

Basically if SATI was putting this kind of investment into these trials they wouldn't sabotage themselves, and they probably wouldn't have the left hand unaware of the part they had to play in the right hand's projects.

So with all that what was trial "b" up to? I obviously cannot say for certain but I have a couple of ideas.


Regardless of my thoughts there's plenty of room for your own interpretations, assumptions, and conclusions. Do you think the commuters of Gre-Vakian c trial are the first? If not, what do you think happened to "a" and "b"?
Posted by Marc Plourde at 12:30 PM No comments:


One of the big features that Predation is likely to sell books on is its Companion dinosaurs. I think that's great because it obviously a cool idea that catches the imagination of a lot of folks. I think it's also great for the Cypher System in general because I think the companion rules are pretty fun and a nice addition to the continually expanding tool set that is the Cypher System.

It doesn't take a lot of effort to reskin the dinosaur and upgrade names to something that suits your campaign world. It could be various fantasy type creatures for a Gods of the Fall game (or something more D&D-ish if you prefer), or it could be strange aliens in a game world similar to Avatar (the blue people one, not The Last Airbender one).

For my money though I think that these could also make great robotic companions, or as I am wont to call them: P.E.T.S.

That's Personal Electronic Technical Servants. Small drone-like but semi-independent robots that would fit great into a science fiction game. These could be small recon bots, larger combat models, or even semi-sentient and autonomous "vehicles" that can carry a rider or act on their own. Unlike a game of Shadowrun where only the rigger has drones, everybody (or nearly so) in a setting with P.E.T.S. would have one to help them out and act as a companion. In fact people find that even though the limited AI of these drones sometimes misinterpret their commands, they are more than worth having around because the personalities they develop over time make people bond with them as they would a dog or cat.

In such a setting the need to roll to "convince" your P.E.T.S. to do what you want is a result of the stock AI needing to learn it's owners vocal and non-vocal queues and signals. When fresh out of the box these AI tend to get easily confused by the unconscious signals a human makes without realizing. Over time however the AIs better learn their humans and become less prone to confusing mixed signals.

It's not a very big hack, but I thought I'd share the paradigm shift.
Posted by Marc Plourde at 12:30 PM No comments:

Author's Notes: This one could have been easy but I wanted the mouse to be small in stature and as it turns out there's not really a good Descriptor for small. The closest I could find was the Halfling descriptor from Alternate Origins (The Strange Fractal), but that descriptor was very tied into the cultural aspects of halflings as much as their physical traits. As a result I decided to build a new descriptor which you will find below. As an adept I am justifying much of the type abilities of this character as bits of gear. Scanning tools, weaponry, and the like. Lastly I want to call out the "Duct Tape" skill, which is meant for jury rigging repairs and creations in short time. Think of the kind of things you'd expect out of MacGuyver. This skill can be used in turns where Crafting would take hours, but the result isn't permanent, and may be prone to failure (e.g. GMI).

Small
You are much smaller than your peers, at least half as tall, possibly smaller. Your body is proportional so you are also lighter and then to be less strong as well. You had to learn to look out for yourself and look out for what others were doing lest they harm you accidentally because they failed to notice you. On the bright side you are harder to hit and quick on your feet.

Initial Link to the Starting Adventure:
From the following list of options, choose how you became involved in the first adventure.
1. One of the other PCs saved your life previously, so you’ve (somewhat reluctantly) agreed to help.
2. One of the other PCs saw the value of somebody your size and asked you to come along.
3. You made a case for your inclusion based on your abilities regardless of your size.
4. You want to prove that you are just as capable as your larger peers. 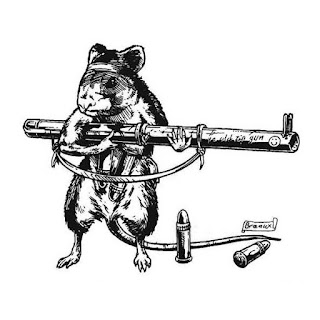 Anthony the Mouse is a Small Adept who Crafts Unique Objects

Skills:
Abilities:
Equipment: You begin the game with a bag of light tools, the tools needed to make your first-tier crafts, and a bag of heavy tools. Mechanic's jumpsuit, wi-fi enabled camera, beat up quadcopter drone, appropriately sized camping gear, 50' rope & grappling hook (rated for your weight), and four rolls of duct tape.

Initial Link to the Adventure: You want to prove that you are just as capable as your larger peers.