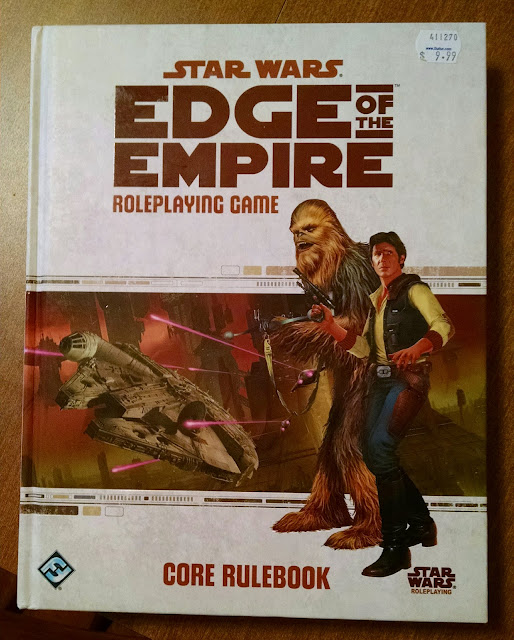 Yup, my copy of Edge of the Empire is a Second Hand Treasure. I'm still a little gobsmacked to this day that I was lucky enough to find this like new copy in the store's used bin for ten measly dollars.

I trawl that used bin (really more like a set of shelves, but bin sounds so much better) frequently, about 2-3 times a month. More often than not I buy nothing, but sometimes I get lucky.  I picked this up on a "Well, shit, it's ten bucks!" mentality. I figured, if nothing else I could read the rules and see what people were talking about.

At home I gave it a skim. Later I gave it a read. It seemed simple enough. I liked the way that attributes and skills combined to form your pool in a unique way. Not just 3 dice plus 2 dice, but instead something more interesting, 3 dice then upgrade 2 of them. This system uses custom dice of course, with the upgraded dice having both more faces AND more results on them. The difficulty system was likewise innovative (at least in my experience) with dice added to your pool that had negative results, and those can be upgraded (downgraded?) into their more challenging version. And of course there are positive and negative modifier dice. It's a lot of dice to roll, and then to you have figure the symbols out, cancel out the bad with the good and find your net result. But it was certainly new (to me) and certainly different.

I found that I wasn't comfortable enough with it to take it further. As a GM I need to feel like I have expertise, or better still mastery, over the rules system. I'm willing to accept a certain learning curve, but if I cannot gain that level of expertise I'll never feel good running the game. I knew that Edge of the Empire would need a lot of learning on a larger curve. It's crunchier than what I'd been playing.

Fast forward to now. I get an email earlier this week inviting me to a game. A Star Wars game using this very system. If all goes well the first session of this will be my ... fifth (I think) time playing FFGs version of Star Wars, and my 2nd as a player. I'm hoping that with a GM who is very comfortable with the rules I can ride part of that learning curve toward expertise. I'm hoping I have the opportunity to try out the rules for the Force that seem quite different than what has come before.

And all for a measly ten bucks.

"Sshhhh, listen, they have eyes and ears everywhere. The government is watching everything you do, everything we all do, and they are subtly controlling it all. Don't believe me? I have proof! Let me show you ..."

Sight Unseen is intended for use with the Cypher System Rulebook in games of modern investigation and horror. It's a resource for player and GMs looking to run games not of supernatural horror, but of the subtle conspiracy sort where the players uncover the horrifying truths that are being kept from the average Joe by the powers that be. These characters may soon find themselves in too deep, and with too much knowledge of dark things. Sight Unseen provides:


Let's tackle those in reverse order (because I am contrary). The new Foci focus (foci focus) on investigation. These are Interrogates, Seeks the Truth, and Wields Science. If you want to play the bad cop, the guy who uses whatever methods are required to get the information the team needs, you may want to consider Interrogates, which does pretty much what you would expect. Seeks the Truth and Wields Science are pretty much the Mulder and Scully foci (respectively). Seeks the Truth is similar to Solves Mysteries but as the author states "Seeks the Truth is more about enmeshing oneself within the web of deception." Meanwhile Wields Science is about analysis and understanding. Connecting clues and interpreting those into actionable information to further the investigation.

The five new Descriptors, Dangerous, Intimidating, Nervous, Prescient, and Vengeful, are pretty self explanatory. Descriptors focus a character's mindset and outlook and inform how they play. A Vengeful Explorer who Seeks the Truth should be a very different character in play than a Clumsy Explorer who Seeks the Truth. The author also suggests that using changes in descriptor can be a great way to lay out character growth arcs and storylines, and I agree, I think it's a great way to show a character change and grow over a game.

Lastly there are 27 new Cyphers. All of these are subtle cyphers, and they are designed to fit into many of the typical encounters you would expect for a game of investigation and  conspiracy.

The result of all of this is a very focused product that knows what it wants to be and accomplishes that goal easily. If you and your group are into running games based on the likes of The X-Files, The Manchurian Candidate, Enemy of the State, and the Illuminati then you probably could really get some use out of this. The foci interact strongly with the Insight mechanic in the CSR (pg 216) and the subtle cyphers are very flavorful and help to bulk out the options for subtle cyphers in a game genre that really needs them. My only complaint is that this product doesn't really offer any GM advice with regard to running such a game. Perhaps that's yet to come in one of the three advertised companions products, but I think their inclusion here would have been a nice addition to help GMs crack a genre which can be difficult to run.

Score: 85% A lot of solid character and GM options are here, but a little GM advice for running these kinds of games would have been a good add, and the lack is a bit of a miss.

Author's note: A complimentary review copy of this product was provided for the purposes of this review.
Posted by Marc Plourde at 12:30 PM No comments:

If you are like me and enjoy the Cypher System then you are probably also like me and enjoy reading the various columns and blog posts by the folks at Monte Cook Games. I especially like it when Bruce or Monte offer us a peek behind the design curtain and sometimes even gives us new tools to use in our games.

If you're also like me you spend a while looking for those posts later because you forgot to bookmark them or save them offline. So I decided to build an INDEX of blog posts (you can find it there ← via the link or up there ↑ in the pages bar) . It's not exhaustive of every post, but if there was GMing or player advice, new rules, or discussion of mechanics I tried to make sure I caught it and put it in there. If you don't play The Strange or Numenera and only use the Cypher System Rulebook for games in other settings you may still want to check out posts titled for those games as the system is the same (and really those early Numenera posts from Monte are gold).

If you find something is missing let me know and I'll see to adding it. The index will be a work in progress that I'll probably update once a month or so. Thanks to MCG for having such awesome resources, and for Charles for giving me the OK to post this up for public consumption!
Posted by Marc Plourde at 12:30 PM No comments:


The darkness of night slowly leaked away. The horizon began to glow faintly orange, then red, and then purple. The hot first rays of light from the Blaze illuminated the ship and sparkled in motes across the seas of sand. The first mate bellowed orders and the crew quickly climbed the rigging, forming a chain of men passing the water buckets up to the highest reaches. They quickly doused the sails, soaking them through. The Blaze's light quickly turned that water to steam, the hot sun's light banishing the cool of night in mere moments.

The crew kept themselves doused as well, the Blaze's rays burned, and burned quickly, in the early morning hours before the rising of its blue tinged sister Frost. At last the first cool blue rays leaped over the horizon cooling everything they touched. The crew began to remove the fireproof clothing as the sails dried with little risk of catching fire.

The first mate barked more orders, the sails were finally rigged full and the ship's leisurely night pace was left behind as it leaped forward with renewed vigor. The dunes below fell behind faster and faster as the navigator began to take fresh measurements against the twin suns.
Posted by Marc Plourde at 12:30 PM No comments: