Qart is clever for a goblin. Clever especially with items of technology. With a small amount of magical talent as well, it was no surprise that he was able to get himself employed by an Inquisitor. What could have been a lifelong career of hunting demons was cut short when an experimental device freed a bound demon. The Inquisitor took a rather dim view of this failure on Qart's fault and the goblin had to flee to avoid becoming the next heretic hunted down by his former master.

In short order Qart found himself in Freeport, where the somewhat looser laws would ensure that any past misdeeds on the continent would probably not catch up with him. It has been a dozen years since all of that and Qart has managed to eke out a decent living building specialty items and repairing machinery in the port city.

His history aside Qart manages to stay gracious toward his clientele, which, combined with his expertise, keeps him in coin. Unfortunately that civilized veneer hides a stingy and self-centered outlook that comes from the hardships of his past. Deep down Qart is still haunted by his past mistake, and the one hole in the armor of his self interest are potential demonic incursions.

Interesting Thing: the true name of a very minor devil


Aircraft are important in Skyward. This is pretty obvious considering the very limited area that any given Terrace has and therefore the limited ability to run adventures limited to a single Terrace. Since Skyward is a Cypher System creation that means that aircraft can be dealt with as simply as giving them a level and walking away.

Nope, you should go the extra mile if you can, especially for something as integral as aircraft are to Skyward. The following are a handful of the aircraft one might encounter in the Blue as they search for the mythical land that stories say exists just beyond the far horizon.

The bright yellow bi-plane flown by Stella Colomen is a modified RT05 Single Engine Courier. The single seat light chassis was extended to add a cramped jump seat for passengers, and the internal cargo capacity was increased to be large enough to accommodate a large steamer trunk. The Canary's engine is a large volume eight cylinder rotary from the Terrace Iron Wing. The Canary mounts only a single gas powered harpoon thrower with hemp line. 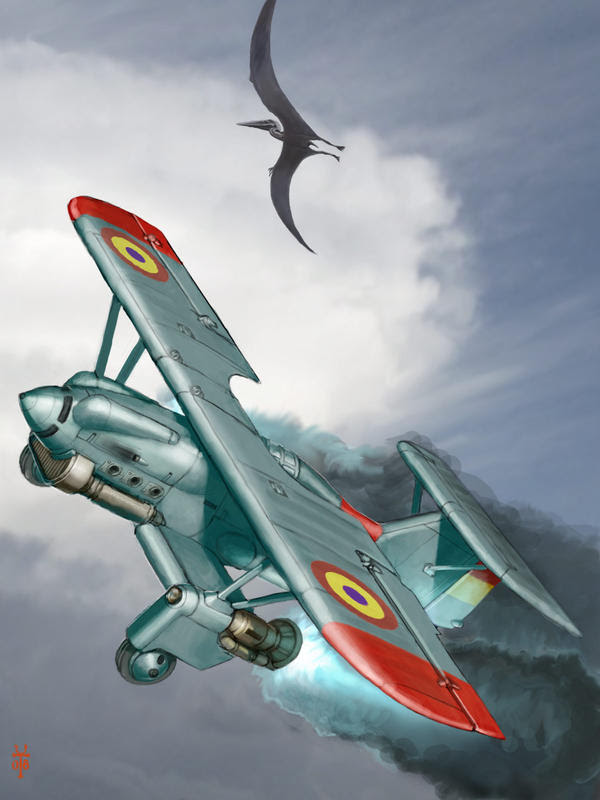 The B-39 Rocket is one of the newest designs out of Terrace Wing. Rather than use a conventional propeller engine drive the B-39 uses a pair of strut mounted rocket engines. These allow for a significantly faster speed, but consume higher quantities of fuel and the B-39 is suitable for only the shortest of journeys. Mostly they see service as defense ships at Terrace Wing and attack ships when deployed from a carrier zeppelin. Their drawbacks also include a tendency to explode if their duel systems are breached. These combine to make the B-39 a rare vehicle to see, but one with unprecedented speed and maneuverability.

The designers at Terrace Wing are working on a next generation B-40 Rocket that will be more efficient and less prone to disastrous explosion.

The Double-Single is a general class of single engine bi-planes. They generally operate using a high volume twelve cylinder engine that, combined with their dual lift surfaces, gives they a great deal of maneuverability. Double-Singles are commonly used as attack planes by raiders and Terrace defense forces. The solid chassis can support up to four harpoon thrower systems, and the engine is more than strong enough to muscle smaller planes around. The common design means that replacement parts are easier to come by and their agility makes them well suited to aerial combat.

The Terrence Class Zeppelins are heavy heavy haulers using lighter than air gas and secondary lift surfaces to stay afloat. Powered by ten on board engines these craft are among the largest to fly the Blue. The carrier variety are able to support up to a half dozen fighter aircraft like Double-Singles. Rumor says that the Thunderhead Pirate Clan has a Terrence Class Carrier, and some say that they have more than one all painted to look identical to hide this fact.

The Brutus C47 Cargo Hauler is a popular cargo aircraft designed and built at Terrace Brutus. The long wingspan and twine Heavy-16 engines allow this craft to haul a great deal of cargo by weight and volume. The C47 is found throughout the Blue carrying scraped aircraft to repair yards, foodstuffs from agrarian terraces like Terrace Green, and other goods and products. The C47 doesn't excel in speed or maneuverability, and seldom sports more than a pair of harpoon throwers for defense, but its cargo capacity is second only to the rigid airships like the Terrance Class Zeppelin and similar.

I very much look at Skyward as a Dieselpunk setting, with technology stopping just before the advent of jet technology, but also advancing beyond that in genre appropriate ways. Because the setting is one of resource scarcity even "new" aircraft will be built from recycled parts, unless the owner is fabulously wealthy. This tends to show as the rolled steel skin used on many craft can be easily patched and reused on new craft without a smelter.
Posted by Marc Plourde at 12:30 PM No comments:

"All readings normal, telemetry from the probe is starting to come in." The astronaut flipped a handful of switches and brought up a readout on the secondary display. "Oxygen is in the normal range, but the carbon dioxide is higher than expected; eighteen percent." The astronaut leaned forward and peered out the capsule's window at the orb below, it was covered in greens, yellows and reds, all shot through with swaths and lines of blue. "Looks nice enough out the window, but I don't think the tourist industry is going to far."

"Roger that Pod One. Decrease orbital distance to one one zero klicks. Deploy lander probe when your new orbit is stabilized."

"Received. Firing thrusters to bring orbit to one one zero kilometers." A shudder went through the pod as it tracked closer to the planet. After a moment it ceased as the pod glided through the orbital space in silence. Another burst and the pod stabilized. "Preparing to deploy lander-"

The pod rocked as if hit by a great fist, accompanied by the sound of an explosion that was quickly muffled by the lack of atmosphere in space. Inside the pod klaxons warned of an explosive detonation in the probe deployment mechanism. "No kidding," the pilot muttered trying to stabilize the pod's quickly deteriorating orbit. "Uhh ... command, I'm having a little problem here!"

No reply came. The pod suddenly shuddered as it slammed into the atmosphere. The astronaut, no longer holding hope of preventing a forced landing, concentrated on preventing a crash landing. Ten minutes of terror, stress, and desperate fighting for control ended in an abrupt jerk as the pod broke through a canopy of vegetation, followed by a hard stop as it slammed into the ground.

The pod was broken open like an egg. There was no was it would get off this planet. With a resigned sigh the astronaut keyed his radio again, but still there was nothing, just static and the bleating of the pod's transponder. "Well ... this is less than ideal."
Posted by Marc Plourde at 12:30 PM No comments:

Friday
Shadow of the Sea Lord - Zags Gash
Posted by Marc Plourde at 12:30 PM No comments: