Gods of the Fall - Session Prep - ... Into the Furnace

What do we know about the Furnace? Well the book says that its all iron, covered in glowing red runes, predates the city by hundreds or more years, and then there's the inside. The inside is bigger than the outside, has numerous rooms, some of which seem to look out on other parts of the world, and occasionally the howling of a predator can be heard. Oh yeah, and sometimes those who go in never come out.

So there's a lot of potential to the Furnace, but it's potential that needs work to tease out and make usable.

The setup of the thing is that the PCs are looking to go in after a recent expedition that hasn't returned. They're already motivated so, in my book, the hard part is done. Unfortunately that's all I have at the moment.


I wrote this WAAAY before we finally played this, so I had a little more than the nothing I claim above.

But ... there's that bit about a predator, and that other one about windows that look out on other places. Both are pretty good hooks and very interesting complications to the story. The party that disappeared could have run afoul of the predator ... or they could have exited the furnace to somewhere else. Honestly, I don't yet know which will be "right."

Let's think about that predator. Looking through the Gods of the Fall bestiary I fail to find something that feels a good fit. The "bigger on the inside" and "windows to elsewhere" aspects of the Furnace however have me thinking about weird dimensions. One of my favorite Numenera creatures is also a dimensional creature, the Abykos is just the right kind of predator, and easily modified to consume divine energy instead of energy from Numenera devices.


I accidentally revealed the Numenera connection during play last night. Not a big deal, but I can't help but wonder if any of my players caught on to the abykos' nature. Still, I think they're working so far as an interesting threat/denizen. We'll see how things play out in the end.

As for the windows that look out on ... somewhere else. That's easy enough to hold in reserve. I have a few ideas. They could just look out on some other place, another part of the world, acting as a form of fast travel. Or they could look out on a different world entirely, that's more difficult because the players will need to get back eventually anyways. As a third option they could open out to another time, the future or the past, either could offer interesting story options.


Yeah, the windows were probably my favorite part last night. It was fun being able to make up scenery on the fly. The first couple were somewhat "normal" but I redeemed myself with a forest of trees that had membranes between the branches in place of leaves, "kinda like bat wings" as I described it. Afterwards I wondered where I dredged up such a weird image, and I kinda hope I get the chance to use it again.

Most of this session was getting the character thoroughly confused and "lost". Due to a timely "bad idea" and a GMI I split the party which I think worked out. The talky player got his own interaction with the abykos folk and may have made a friend. Or not, we'll see how that works out. We ended the evening just after getting the group back together. So the next session will be a probably wrap up of this story (unless things go long as they sometimes do). I've been noodling this idea around for a bit now. Thankfully it's one that requires almost no real effort to implement, and has a pretty easy learning curve for players and GMs. Also, it's probably something that people are doing without realizing it already. Basically I'm going to steal the idea of Aspects from FATE for use with Cypher.

First, a bit of background for those of you unfamiliar with FATE and therefore aspects. From the FATE Core System Rulebook, "An aspect is a phrase that describes something unique or noteworthy about whatever it’s attached to." (p.56) Now in FATE there's different types of aspects; High Concept, Trouble, and then regular aspects. Player characters get one each of the first two and three of the last.

The great thing about Cypher is that your character sentence is basically the character's High Concept. Indiana Jones is a Tough Explorer who Hunts Relics, does exactly what the high concept is intended to do and wrap your character up in a neat little one-line package.

That just leaves a Trouble and however other aspects the GM wants. The Trouble aspect is pretty self explanatory, being a character flaw or such that leads the PC into temptation or bad choices. Think something like Indy's That belongs in a museum! that got him into hot water twice in the first hour of The Last Crusade.

Any other aspects just help fill in the blanks. In Fate they are crucial to other parts of the system, but in Cypher they could be used to hit on character traits that aren't easily defined by Type or Focus abilities. This could be something like Opposable Feet, or something like, Branded by the Devil.

OK, so now that I've laid out what Aspects are let's talk about what they would do in a Cypher System game. It all boils down to two parts of the game: GM Intrusions, and player assets. Now, I'm not proposing that there is anything wrong with GMIs, far from it, it's one of the high water marks for Cypher, but at times as GM I just struggle to do a GM Intrusion that fits the scene. Having a character's Trouble aspect handy would be a great reminder of how to do very character driven and personal GMIs. Indy just can't resist a good adventure to find lost cultural treasures, and protect them from Nazi's after all!

As for assets, I feel like, in my experience, players don't always have good ways to grab assets. They have their skills and effort, and maybe an obvious asset from equipment but there are times I wish that somebody would ask, "Hey, Indy is a Tough Explorer who Hunts Relics, can I gain an asset to figure out if this pedestal that the idol sits on has some kind of trap?" Because A) that would be awesome, and B) I would reply "Hell Yes."

And then there are the weird instances of characters. Characters like the mutant Chimpanzee that I created as a pre-gen for Furry Road and posted earlier this week. As a chimpanzee he has opposable feet, meaning that unlike I silly humans he can easily grab and manipulate things with his feet. Maybe not as well as a human hand, but way better than a human foot. This should count for something, but it's not something easy to quantify as a skill, or even a Type or Focus ability. I even checked the mutations in Numenera and The Strange and didn't find something I liked. I built a custom ability, but I think that just having "chimpanzee" as part or whole of an aspect would probably have worked just as well. In fact I'm going to probably do all the Furry Road pre-gens in this way to help cover all the little bits I cannot otherwise catch mechanically with abilities.

I'm not advocating the creation of actual aspect phrases for Cypher System characters, but treating the character sentence as a kind of aspect and using that as GM to help guide GM Intrusions and assets cannot be a bad thing. Much like the One Unique Thing, Icons, and Fractal Design I think Aspects have potential to inform gameplay in other game systems, or, for GMs and players who like, they can even be lifted directly into other games to help bridge character concept with character rules. 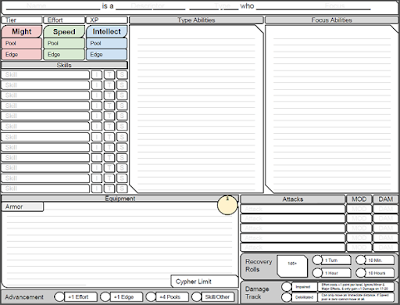 So a while back I mentioned that the metrics for my blog were showing that my custom character sheet was nearing 1000 views. I also promised to do a revision of the same with updates based on how I play the game and see it played now. This new sheet removes the large circles for pools (since my group uses either scrap paper or poker chips), has a single stack of skills (since we don't tie skills to pools), and does away with the cypher section almost entirely (since we use index cards or the MCG cypher cards). The result was a goodly more area for Type and Focus abilities and a cleaner look (IMO).

You can download the new revised version here. I hope you enjoy it, and if you have any feedback please leave it below in the comments.
Posted by Marc Plourde at 12:30 PM No comments:

So this is the first of the planned pre-gens for Furry Road, my Gen Con "secret game" and an homage of sorts to After the Bomb one of the first RPGs of my youth. My design notes will be included to discuss things like how I represent character traits and any excursions from the standard Cypher System Rulebook basics, this includes Descriptors and Foci from outside of the CSR.


Designers notes:
My intent with Cornelius was a team leader of sorts. A planner and enabler who helped make other people better. Unlike the "face" Cornelius's Speaker abilities would be geared toward aid over working people. Since chimpanzees are primates this character would be the one requiring the least effort for "animal traits" mainly just something to represent the opposable digits on his feet, for this I decided to simply replace a single skill purchase with an ability that would grant an asset when the character could use his feet for a task like climbing, holding, or the like. I also selected climbing and balancing to help round out that ability.
**Note: The Resourceful Descriptor is from Numenera Character Options 2

Weapons:
Initial Link to the Adventure: The Calivada Road Patrol (CRP) approached you to ask you to the mission, because of how resourceful you are. Though you prefer to stay at HQ with your books and maps, you know that the team will need your help and leadership.

Monday
Furry Road - A Cypher System Homage to After the Bomb

Friday
Gods of the Fall - Godly Visage
Posted by Marc Plourde at 12:30 PM No comments: