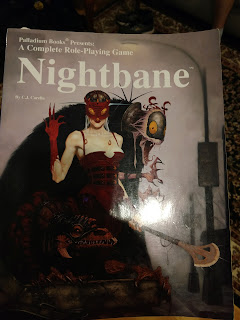 I've mentioned before my current Cypher campaign in the Nightbane setting (a Palladium RPG that's proving way more fun in Cypher System). The players are really getting into things and exceeding my expectations for role playing in a horror setting. Horror games can be tough if the players aren't on board for playing horror, but so far this hasn't been the case for this tale of people turned monsters. In the course of the campaign thus far fear and paranoia on the part of the characters has been playing strongly into the actions of the players. Even better the dice seem to be in on the fun and have been supporting things.

Picture the scene ... one of the characters has found that by traveling through mirrors he can access a parallel shadowy earth; a twisted realm known as the Nightlands. He convinces a second character to help him take the bodies of two doppelgangers they killed to the Nightlands for "disposal." This second PC has been pretty freaked out by everything and is reluctant to go to this scary sounding Nightlands place, but he mans up and tries ... and fails. He spends a moment to put some effort into it and tries again ... and fails, again. He spends and XP, and still fails (mind you a lvl 4 task with effort he only needs a 9+). He takes a recovery to get some points back and collect himself and tries, and fails, again.

I mention this not because these moments are amusing and memorable but because I've been taking these role playing moments, and using them in conjunction with a little use portion of the optional rules: XP Advances.

You'll find the text for XP advances in the Cypher System Rulebook on page 230-231. The basic gist is that the player can trade negative character traits for XP. For example a character who is wanted by the law might get ~4-6 bonus XP. Normally such traits and their trade off bonuses are the domain of character creation, but I've started to use the rule in the situations above to give role-play informed modifications to characters in exchange for Advancements.

So in the example above I offered the player a permanent Inability in tasks related to traveling through mirrors (a pretty big deal since the Nightlands are the only place to get Cyphers for this character in this game) and in exchange an advancement for extra edge in a pool of his choice. I did similar for another player whose character continually refused to transform back into their human guise. These are optional for the players and I only offer them when it feels right for the character and the story, but so far it has been well received and has made for interesting character development and roleplay.

If a GM wasn't willing to give out entire advancements they could hand out XP, or other short, medium, or long term benefits. These types of character impacting modifications should obviously be taken carefully and not abused. Let the game guide you and only offer them when it feels earned by the direction of the role-play and the game.
Posted by Marc Plourde at 12:30 PM 6 comments: