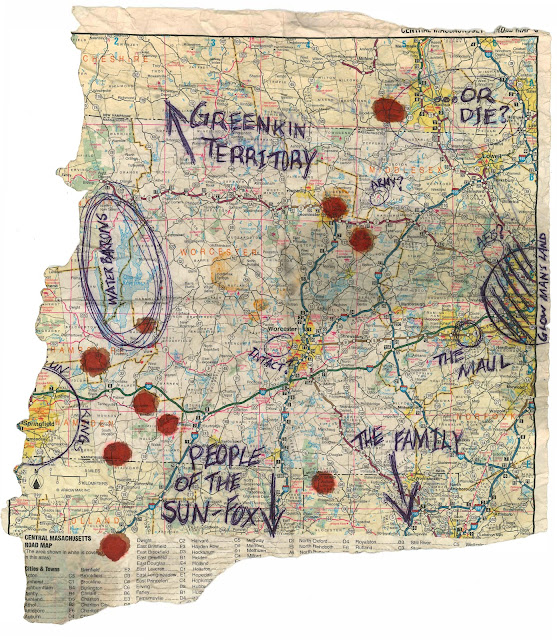 Last week, I wrote about finding some old road atlases and thinking they could be great for making maps for Post Apocalypse games. Well, this week I put my money where my mouth is and show off the results of the last week worth of efforts, including the techniques I used to get there!
The map above (which is nice and high resolution so feel free to use it if you want), depicts central Massachusetts. I tore it out of the atlas, grabbed a pen and got to work. As it had been quite some time since I last did this I documented my process and had to figure some stuff out the hard way. Example: the aging effects I used can cause ink pens to run if they are water soluble, and even some run will happen if they are not, I used a black pen and ended up with fairly blue lettering after multiple soaks. Know your materials and consider your order of operations.
The first thing I did was put some notes onto the map. Again I used a black ball-point pen, but as you can see from above it ended up looking more blue. This is fine, but was a result of my doing the writing before the "aging" effects. Here's what the WIP (work in progress) looked like before I started aging. 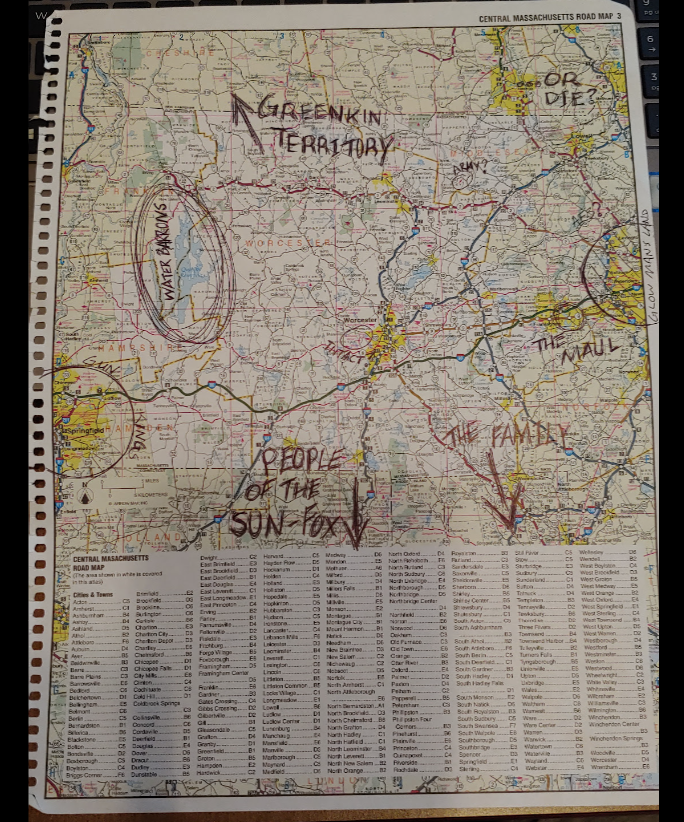 You'll also note there's a lot more there than in the final. I decided early on to burn off the ripped dangly bits on the left side, and tore off a good chunk of the legend since that would make finding locations a little more difficult. That gave me the nearly final size and shape of the map. 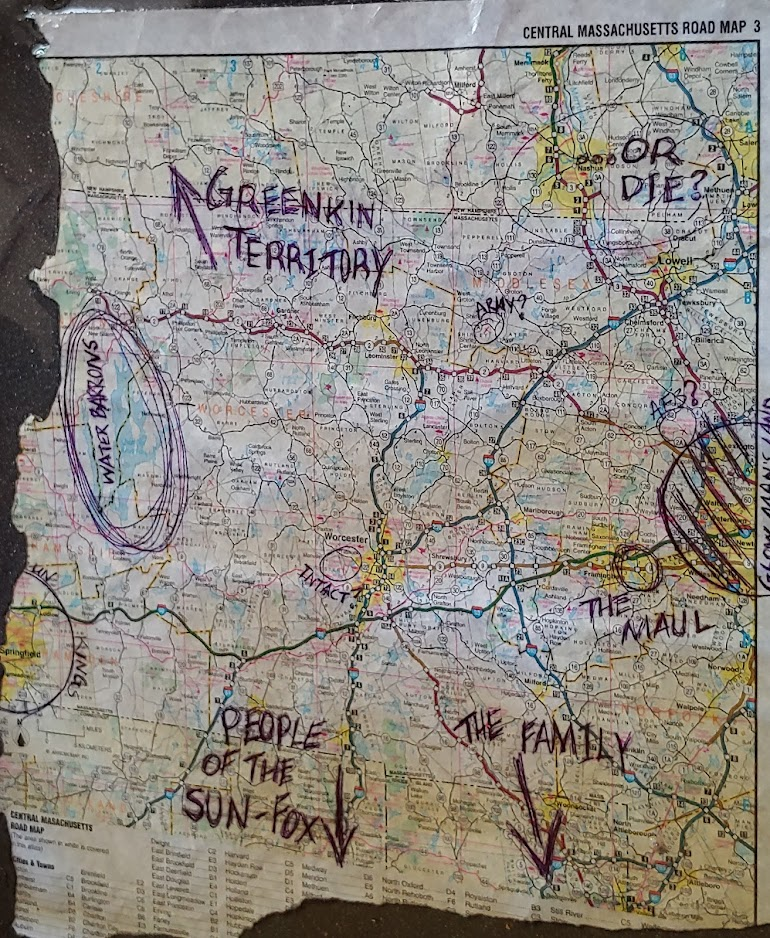 The above picture is in a weak soak of tea. Weak because I tried to re-use a used teabag from my morning caffeine infusion. You can already see the lettering turning more blue in color. This may or may not suit you and your preference for pen style. I know I will probably do aging before writing on my next map. I ended up sacrificing a new tea bag to make a second soak because I wanted my result to be a bit darker. I also crumpled and un-crumpled the paper a few times before, between, and after each soak, I was looking for a final result that had that soft and more cloth-like feel at the end, which I think I managed really well.
Between the first and 2nd soak I also tried to put some stains in using a little cooking oil and some soy sauce (it's what I had on hand!) followed by some hot sauce (Frank's Red Hot btw). While the oil worked the other two ended up being very minimal in the final product. 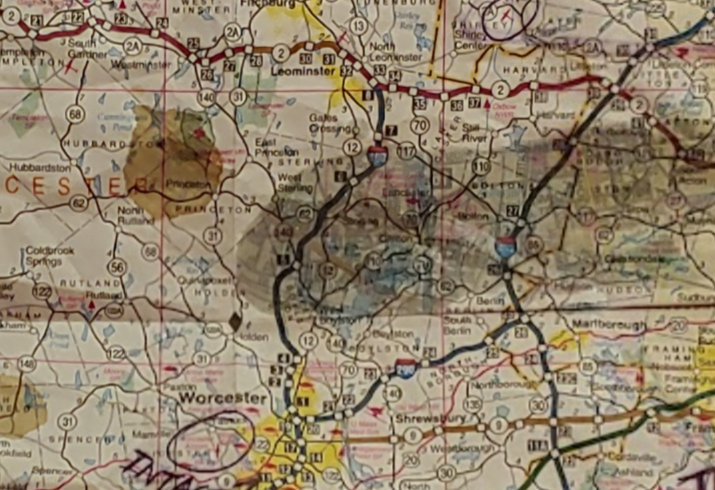 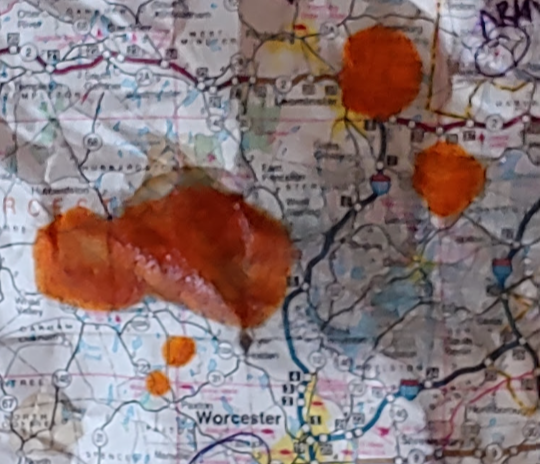 After the second bath in tea I was happy with the state of the paper but it felt like it needed something. My focus group agreed, and suggested some blood spatter would look good. I wasn't willing to bleed for my art, so I tried red food coloring. It was way too bright. 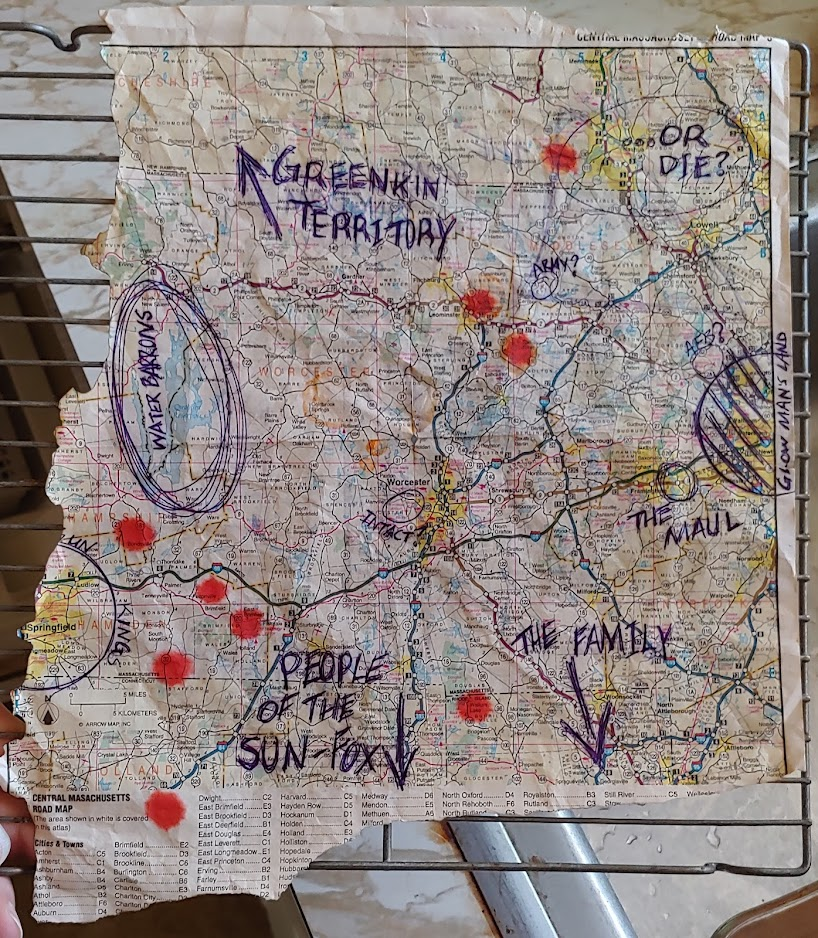 It looked far to red for an old blood stain, blood usually dries to a darker brick red/rust color so I needed to add something to the dots to darken them. I did some experiments on the side and found that Dark Soy Sauce (a specialty product for most folks) worked well. I think that dark coffee might get a similar result. You want something that will only darken the red, not cover it. I'll try coffee the next time out. These were all applied using the end of a chopstick to dab the paper. I wanted to avoid a paint brush. A fingertip could also work, or the end of a fork. Test on a sheet of scrap so you don't ruin you badass map.
In conclusion what I did was:
Based on my learnings though I think I would consider moving my first step till after the soaking is done depending on how "new" you want said notes to seem on the paper. Generally I am pretty happy with how it looks, although even the hi-rez scan above doesn't quite get the colors right. WHat I am very happy with is the physical presentation. In person it looks and feels like a well worn wasteland map that the characters might be given or find. Sadly in person games are still some ways away, but just making this has been hugely fun and given me a real hankering to run some post apocalyptic fun. I hope it will for you too!
An aside: The aging techniques, use of tea soaks and crumpling of the paper, can work for old treasure maps and the like for any genre. Use the basic idea here for your fantasy RPG of choice.
Or don't, I ain't the boss of you.
Posted by Marc Plourde at 12:30 PM