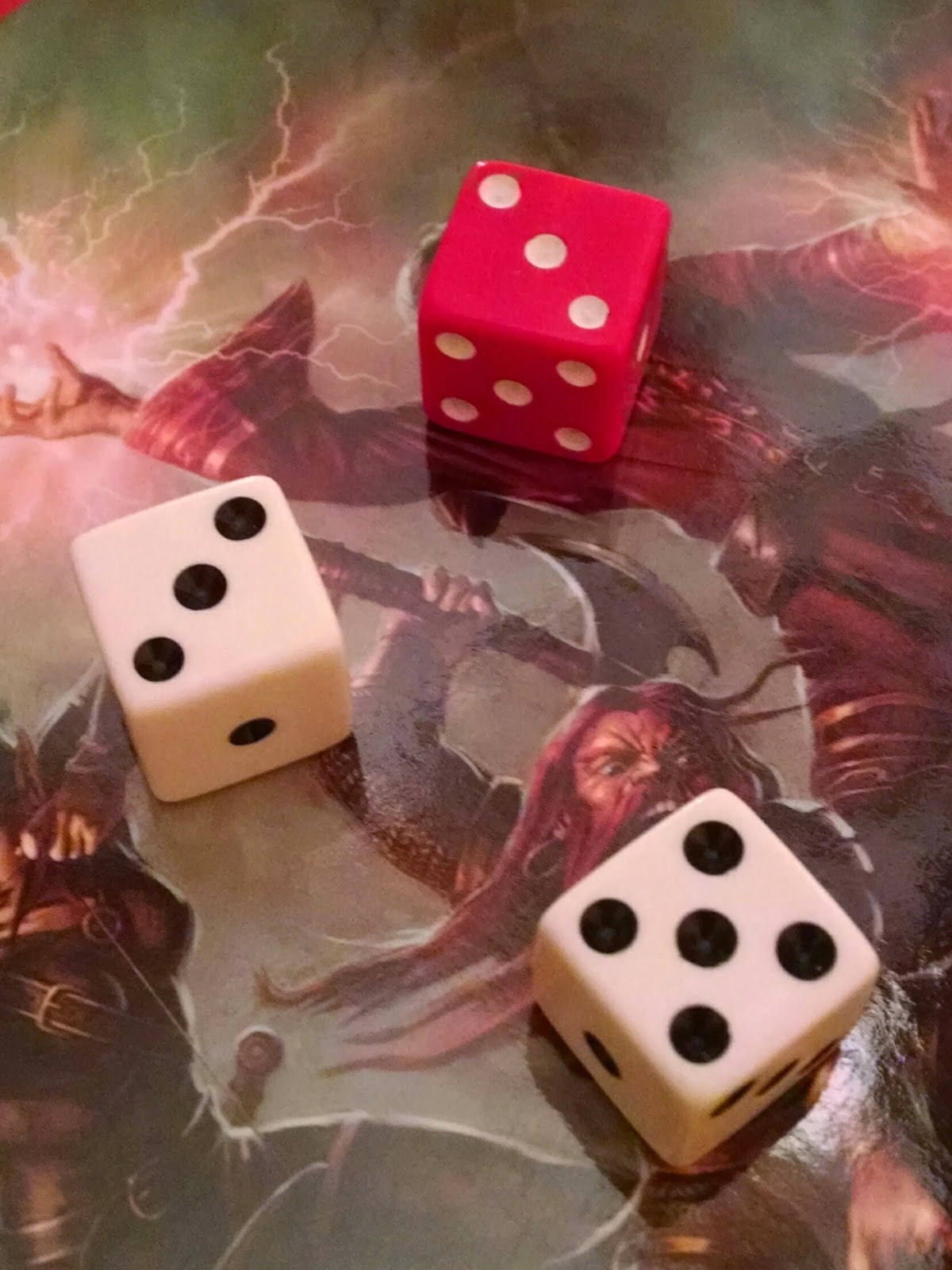 Numenera (mentioned back in the second column) is not the only game I am playing nowadays, and although our campaign has been on hiatus for a bit, I have been enjoying Dragon Age immensely. This is relevant because I can point to a single aspect of the AGE (Adventure Game Engine) system as the reason: Stunts.

The AGE system resolves all checks for attacks and skills with a single die mechanic: 3d6 of two colors (e.g. two white and one red, as above) plus an attribute and modifiers from skills or other bonuses.  As a result there is a bell shaped probability curve, quite unlike the flat distribution of a d20 roll as used by numerous other systems.  Instead of having a system for critical hits on high die rolls the AGE system uses a Stunt system.  When any two of the dice match, and the attack or skill check is successful, the roll generates Stunt Points (SP) equal to the "Dragon Die", the one red die in the example above.

Right off the bat this means that unlike the venerable "critical 20" a roll can generate Stunt Points regardless of how "good" it is. In other words, so long as the underlying check succeeds the dice can generate SP through the entirety of the result curve, not just at the extreme high end. The worst roll, a 3, with sufficient bonuses, against a low enough difficulty, could succeed, and the player could gain a single stunt point.  Likewise, because there are two colors of dice, with the odd die out setting the number of SP generated, a roll of 1,1,6 could generate 6 SP, or 1 SP, and a roll of 6,6,1 could do the same. This mechanic also occurs far more often than the aforementioned critical 20 (which is 1 in 20 or 5% of the time), with a probability of roughly 42% (though some of those, like a roll of 1,2,1, will likely not pass the difficulty to become success). Most commonly this will come up in combat of course, and all things being equal combat will see stunts coming up multiple times every combat, sometimes multiple times in a round.

But what good are these Stunt Points, you may ask? Stunt Points can be spent to purchase various special moves and modifiers. Spend a couple of points to add a d6 to the damage of your attack, or make your attack disarm the enemy.  With enough points you can perform multiple attacks, or drive an enemy back. The options, combined with how frequently stunts can come up in combat, make for a very dynamic combat system.

Stunt Points cannot be saved for future use, so a single SP must be spent or it is lost. This encourages creative play with the stunts available against the SP available for that stunt. Additionally, as players advance their characters they will gain abilities that will reduce the cost of certain stunts associated with their class or talents. A character who uses two hand weapons will find it easier to afford the "Mighty Blow" stunt that adds 1d6 damage. While a rouge will find that they will find it easier/cheaper to use "Pierce Armor". These advantages both encourage a certain kind of stunt use, and ensure that as players gain more experience they become capable of ever more powerful, and impressive, combinations of stunts.

Of course dice rolling isn't limited to combat, and neither are stunts.  Lists of stunts for social and exploration encounters are included that will enable characters to excel in those areas as well. Swaying opinion, locating extra clues in the current scene, and the like.

In the end the Stunt mechanics ensure dynamic results on dice rolling, and help to drive exciting combats and other encounters.
Posted by Marc Plourde at 12:30 PM