Corruption. Whether its a fall to the Dark Side, giving in to the temptations of demonic powers, or succumbing to madness as a price for forbidden knowledge, corruption of the body, mind, and/or soul is a prominent theme in fiction and role playing games. There are many character types in RPGs who have to struggle with (or potentially revel in) corruption from Jedi, to vampires, to the investigators and cultists in games set within the Cthulhu Mythos. Of course there is also moral corruption, but ... that's another column.

Let's start by looking at the potential mechanics involved with role playing characters who are subject to corruption. There are, of course, games that don't deal with mechanics, they leave a character's fall to darkness, or ascent from those same pits, up to pure role play and agreement between GM and player. That can work for some games and for some people, but it doesn't make for a good column about game mechanics.

There are two ways that a character can slide toward corruption, the path of constant struggle, and the slippery slope.  The path of constant struggle assumes that every step down the path of corruption is as difficult (or easy) to resist as the one before it and the one after it.  The character's fall to darkness, mutation, or madness takes place in increments often through their own choices or actions, and they often have every opportunity to stop falling toward corruption. Being exposed to a genetic mutagen requires some kind of resistance check, but no matter how mutated the character becomes the next check is the same as every other.

The slippery slope, on the other hand, is as it sounds, with each step down the line becoming harder to resist and/or easier to trigger.  Perhaps the difficulty of the sanity check increases for each prior failed check, as the character fails more checks the likelihood that they will fail more checks increases. Alternately instead of the resistance checks becoming more difficult they come more frequently. As one's sanity begins to erode more things have the potential to cause your already fractured psyche to reach the point of another break.  And then there are instances where the slippery slope becomes more like "watch that first step" as checks become more frequent and more difficult.

Redemption often follows the same paths. Sometimes the state of a character's corruption is as easy as backtracking, doing the opposite of their prior behavior, and making the same kinds of tests to change themselves back. Whether this is a steady process, an uphill battle (with each step up the path becoming harder), or even a sort of slippery slope where the path to redemption becomes easier over time. Depending on the specifics of the corruption, redemption may also follow a path different from the path down. A path of steady descent may have an uphill climb to redemption. Of course sometimes there is no way back from the darkness.

Depending on the type of corruption there may be player choice involved with regards to a character's movement through that journey. In a post apocalypse game with mutating radiation the players can only do their best to avoid exposure to this radiation, and if they fail to do so they may stumble into mutation.  Users for the Force however have every choice in the direction of their character. While there may be times where succumbing to negative emotions is difficult the character has choice on their side, and the ability to seek redemption.

So why make a choice like tapping into the dark side of the Force, or calling power from demonic sources? Often the answer comes down to risk versus reward. Assuming that the player doesn't have a plan to run their character a certain way then the balance of risk and reward will likely drive a character's path during play.  For the Jedi the reward of the dark side is fast easy power.  The risk is that they will become addicted to that power and seek it out more often. For a user of dark magic the reward is their magic itself, while the risk is increasingly greater degrees of demonic influence, be it mentally or physically as the character starts to become a demon themselves.

Balancing the risk and reward for a choice based form of corruption is important as well.  If the risk is too great and the reward is not commensurate players will be less likely to take the risk.  Likewise if there is reward with little risk then the bite of corruption becomes such that character's will overindulge without consequence. In either of these cases if corruption is meant to be rare or infrequent (or super common) it may be better to remove the mechanics altogether and allow the GM to adjudicate the instances of corruption via role playing alone.

With a good balance between the risk and reward however the players will willingly take the gamble according to their own analysis of that relationship, taking the risks when the rewards will be most able to help them, while refraining from doing so constantly so as to avoid excessive exposure to corruption.

As an example, the White Wolf game Aberrant featured super humans powered by quantum energy, but exposure to excessive quantities of quantum could result in taint and aberrations that altered the character's mind or deformed their body (though some saw these changes not as negatives, but as a sign of transcendance of their human limitation).

The methods for gaining taint, and aberrations, varied but the common theme was that "power corrupts"; characters could purchase powers at a discount by taking taint, thereby making their points (whether at chargen or later with experience) give them more "bang for the buck."  In practice buying powers with taint was often very cost effective and a well balanced reward versus a known risk.  The only downside was that characters who started buying a power with taint did not need to continue doing so.  Combined with the fact that the first few points of taint did not generate any aberrations led some players to always buy a little taint because there were no consequences.

In addition characters could amplify their powers by performing a "power max" driving their abilities to have stronger effects or gain ancillary add ons, like a ranged attack becoming explosive, or a mental attack having the ability to penetrate mental defenses. In theory this was a good mechanic, allowing characters to put extra power behind their effects balanced by a risk of gaining more taint.  Practice however showed that the instance of character's generating taint from such behavior was extremely low, and the taint gained was "temporary" and could be bled prior to becoming permanent.

The result was a system that promised one thing and delivered poorly on it. With players who wanted to play their character's descent into aberrancy being forced to do so a certain way, and posing very little risk to those who wanted to avoid taint, while simultaneously providing a clear and fairly risk free way to "game the system".

In closing, corruption can allow for themes of good and evil, purity and taint, the price of power, and the like to be explored with dramatic, and visible in some cases, signs of a character's state. Using and creating mechanics around such kinds of corruption requires some thought as to the balance of risk versus benefit, and some consideration on how easily characters will fall to corruption, and if they can rise from it and be redeemed and how difficult that journey is.  Corruption isn't for everyone, but for certain kinds of games and certain kinds of players it can lend another layer of depth to role play, while for other games it can be an integral part of the conversion of a fictional world to a playable game.

In other news the blog rolled over 4k views last night.  So I want to extend a heartfelt thank you to all my readers for continually showing me that there is value in my efforts here. 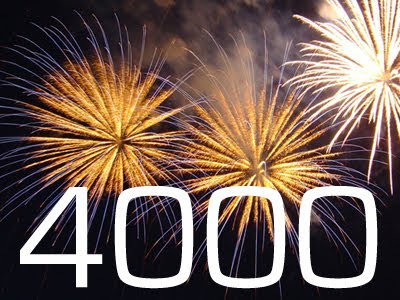