Review - Agents of the Beyond 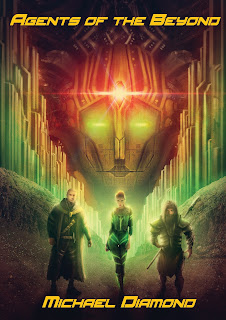 Near as I can tell it's been a good twenty plus years since I last reviewed a book that wasn't a gaming supplement. So how do I approach a "book report" as an adult?

I have no idea. I'm going to wing it and hope this all makes sense on the back end.

Disclosure: While I was not provided with a freebie of this for review, I do know the author ... though he did help kill at least one of my DCC characters at GenCon this year, so I don't think I owe him anything.

So Agents of the Beyond is the first full length novel set in the Ninth World of the Numenera RPG. It may also end up being the only 3rd party novel as well, but we shall see. First off let me say that knowledge of the game setting is not required to read the book. Michael does an excellent job laying the groundwork of the setting and bringing the reader into the world. Starting off at the Beyond's most famous landmark the Beanstalk helps to drive home the setting's mixture of high and low tech, old and new worlds. We get introduced to the main characters there before things go topsy turvy and they are pushed into a journey across the Beyond toward Nebalich.

Because this is a book and not a travel journal it is safe to assume things do not go according to plan, and the second half of the book comprises a significant diversion for the characters that results in some major upheaval. Along the way some mysteries of the past are uncovered and revealed, while some of the horrors of the present day are dragged into the light.

It took me a little while to get into the book, but I'm not sure how much that is an aspect of the story or my own reading habits. In this instance I can say that for a good portion of the first third to half of the novel I wasn't sure if one of the mains was somebody I was supposed to like or not. That is often the sign of a good story and good writing; after all, if either of those is poor you tend to lose interest rather than feel conflicted over one or more characters.

The action and adventure are also well plotted and written. The use of cyphers, which is so key to the game play of the RPG, features heavily throughout the narrative. Discoveries of the prior worlds feature heavily into the story as well.

Come this all together and the Agents of the Beyond was a pleasurable read, a fun jaunt into the Ninth World, and a good entry into the setting for people who might be on the fence for a RPG.
Posted by Marc Plourde at 12:32 PM