Early Thoughts - Gods of the Fall 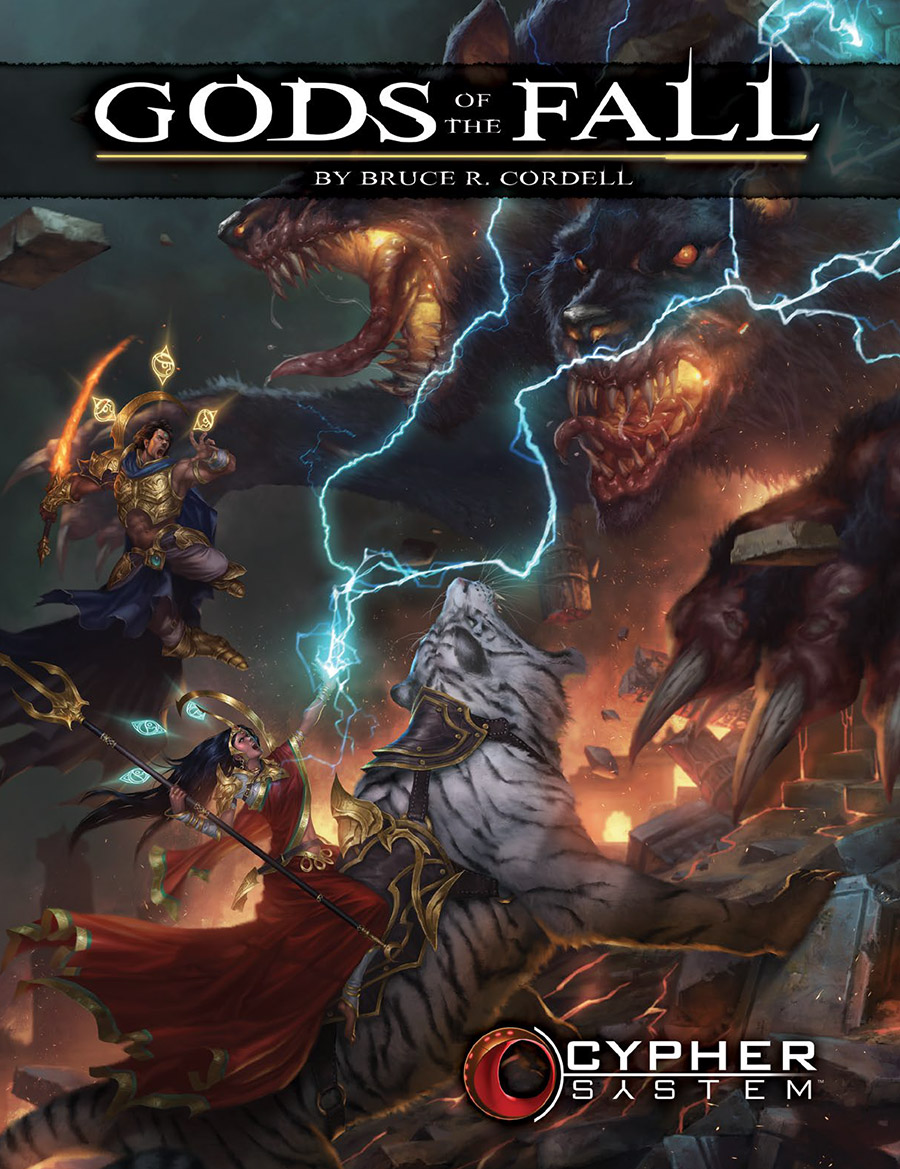 With the newest Cypher System Setting (alliteration anyone?) finally available I've started (only started) to read the book and digest it. I know that as I read more my opinions will "mature" more in that they will be better informed by a clearer picture of the whole. Still having already had an early chance to play and having good footing with the rules I can start to form ideas and opinions as I begin to read.

There's something to be said for the wide open character creation options. Some may bemoan detailed lists of abilities specific to each possible Domain. Instead GotF allows Domain choice to be wide open and players to skin and adapt their abilities from Tier and Focus to their Domain. In doing so the game comes out stronger, at least in my mind, for its lack of overwrought mechanical complexity and its breadth of possible Domains. It's entirely possible to pick Domains you'd never see if MCG had gone with specific Domain lists.  Gods of Bubblegum, Tacos, and Left Handedness, are absurd but entirely possible for a creative player. Likewise a player could choose to be God of Earthquakes instead of a more broad and generic God of Earth.

More than that though is the way that the Seven Prophecies allow for potential Gods to ride the spectrum from good and just gods of light to a bunch of vengeful a-holes. Six of the Seven Prophecies are arguably straight up good and hopeful, but the funny thing about prophecy is that it doesn't always capture the whole story. Slaves could be freed only to be recruited into a burgeoning God of War's army to help him conquer the world. Bringing love into the world may well mean breaking as many hearts as you bring together. And then there is the Prophecy of Ruin which is just a little darker in general. So feel free to be that mean hearted God if it suits you, there's room in the game for darkness and light.

Rife with Possibility, RIFE I tell you!

Seriously, there's a ton of detail here, but so much more freedom to fill around the edges, between the lines, and more. I already talked about how the system really lets players do whatever they want for godly domains, and how the Seven Prophecies also give the GM a ton of freedom to design their campaign. The setting itself has plenty of options. Consider the ultimate cause of the Fall: The Annihilation Seed. Found deep below the world this is written up with many options for its origin and source, and if the author gives you five options another few of your own certainly wouldn't hurt.

Or consider the map. There's a huge amount of empty space between cities and holds and the edges of the map are not the edges of the world. I'm considering having my heroes come from the west, beyond the map in those blasted lands west of Corso. This gives me the opportunity to introduce elements of my own  making while not requiring the players have a deep understanding of the setting right out of the gate.

Literally. When heaven fell and broke the world it revealed the Deeps, five catacomb like layers under the Afterworld. The Deeps strongly imply that all of this has happened before and will happen again (OMG it was the Cylons!) but more than that they inject a plausibility to having vast dungeons and cave systems that lots of other settings never really earn. The fact that they are alien and weird and that there may be clues to what caused the Fall in the first place down there just adds to their possibilities for story and game use.

The Deeps aren't all that exists beyond the Afterworld too. There's Nod, the moon sized world that bathes a great portion of the world in constant darkness. There's Soulrest where once the dead went to their eternal reward but now without a god of death souls are the playthings (or worse) or beasts like the Hellmaw, or free to return to the world and cause their own troubles. And then there are the countless worlds out in the Aether ...

What Discoveries are Yet to Come?

Unfortunately I've read little more than a dozen pages, and skimmed perhaps twice that; all combined that's less than 20% of the book. There's still tons of setting to uncover, a bestiary to read, and a proper read through of the Dominion version of the CSR's power shifts to digest. I can't wait to see what else awaits!
Posted by Marc Plourde at 12:30 PM