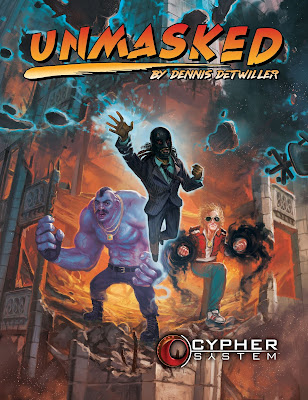 I've not yet played Unmasked, but I can already see where the rules choices and setting structures can be pulled apart and put back together to not only tell the story I want within the context of this setting, but also for other settings. As the third (but hopefully not final) World of the Cypher System I feel like this game dives into the deep end of the possibility of the Cypher System in general. As a follow up to Gods of the Fall and Predation (and Numenera and The Strange before them), Unmasked is more than worthy, and a triumphant piece of nostalgia gaming that still feels innovative and very much like it's own thing.
Posted by Marc Plourde at 12:30 PM