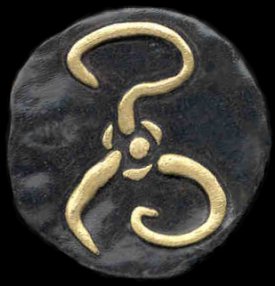 Freeport isn't your run of the mill fantasy city. It's not even a run of the mill pirate city. A mix of pirates, magic, black powder weapons, ancient relics, demi-human races, and dash of Lovecraftian horror. In Freeport the Yellow Sign (which is technically not a creation of Lovecraft, I know, but is very much within the domain of "Lovecraftian horror") is the sigil of the Cult of the Unspeakable One (no, not Voldemort). The Yellow Sign and the Cults of the Unspeakable One figured prominently in the events of the original Freeport Trilogy and it has been established that the Yellow Sign is an arcane symbol of such power that just looking on it can draw a mind toward madness.

Given the power of the yellow sign it seems appropriate to consider the mechanisms of the Yellow Sign with regards to how it can affect players and NPCs. Thankfully Shadow of the Demon Lord already has some robust rules for madness and insanity, and as such the Yellow Sign merely needs to be fit within those rules.

Warning, spoilers for the Freeport Trilogy and possibly madness will follow.

Any exposure to the Yellow Sign should have the potential to instill madness. In SotDL terms this will obviously be a challenge roll with failure granting one or more points of insanity. I want the Yellow Sign to be something that is always a threat, but not always a dire one. If you know the lore in Freeport the "quality" of the Sign can impact how powerful a given sigil is. The construction of Milton's Folly, with bricks that were each inscribed with the Yellow Sign, helped to act as a conduit and amplifier for the lighthouse's beacon itself. The result was a threat on a truly epic scale that could drive a person mad with a single glance.

To help show the degrees of power in the Yellow Sign I'll be using banes and boons and also modifying the amount of insanity gained on a failed roll. For truly powerful uses of the Sign there may even be insanity gains for successful rolls showing that no mind can withstand the level of otherworldly madness.

Yellow Sign (basic) - This is a basic inscription of the Yellow Sign. It is not poorly carved/drawn nor is it especially well carved/drawn. This is likely not actually yellow in color either (a trait which some ascribe greater potency to). Likewise this inscription is in no way magically endowed or enchanted. Even the most crude rendering of the Yellow Sign draws power from the Unspeakable One that can bring madness however.


For each time a character looks at the Yellow Sign they must make a Willpower Challenge Roll or gain 1 Insanity. After such a roll the sign in question generally cannot affect a person until they complete a rest.

Magic is often used to bolster and enhance the basic Yellow Sign, and the most powerful such symbols often combine both magical enhancement and the mundane enhancements detailed above. Magically rendered signs of the Unspeakable One often derive from profane rituals to the dark god, and gain greater power not only to pierce through even the most willful of minds, but also to tear ever larger portions of one's sanity away.

A magically imbued Yellow Sign gains one or more of the following at the GM's discretion.


The more powerful the more effort and time to perform such rituals is required. The profane beacon that was built into the Lighthouse of Drac was literally imbued brick by brick and contained millions of sigils each with minor enchantment. The end result was a Yellow Sign beacon that lit the skies over Freeport and could drive men and women mad with a single glance. Thankfully the machinations of Milton Drac and the Cult of the Unspeakable One were stopped, for surely had the beacon been allowed to remain lit it would have become a new manifestation of the Shadow.
Posted by Marc Plourde at 12:30 PM