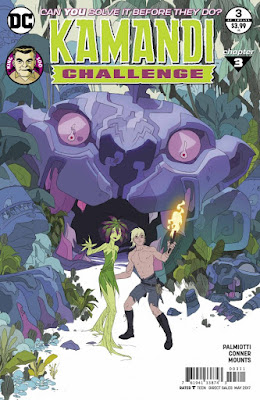 Where were we? ...oh, right, in the claws of a giant Kong sized cat!

Kamandi and Vila were in a bad place. Our plucky hero fought back as best he could against the giant cat, finally jumping down its throat... and waking inside it's control center! This was no giant mutant, but instead a cleverly disguised giant robot! While Kamandi managed to enter the robot unharmed Vila was less lucky and once again the protagonist had to come to the rescue.

Honestly I was a bit disappointed with this. Kamandi is the hero, I get that, but Vila as a character has been little more than a half century old damsel trope. The last issue Kamandi rescued her and freed her, and it was, relatively, OK because he clearly had the agency last issue. But now would have been a good opportunity to give Vila her own agency and instead ... not so much.

So instead Kamandi confronts the two cat-scientists, or are they cat scientists?, that control the robot. Long story short, he grabs Vila and climbs back out the mouth of the robot and into the cockpit of the jet the robot wears around its neck. Activating the jet Kamandi and Vila escape while also serving their captors a little comeuppance.

Kamandi blacks out and the plane crashes elsewhere, in a rocky desert by a massive wall. In short order Kamandi and the unconscious Vila (see what I mean about no agency?) are captured and revived by the Kanga Rat Murder Society. They are to become the next participants in a blood sport hunt somewhere in the ravaged post-apocalypse Australia...

OK, so let's break it down. The writing is pretty good aside from the whole issue with Vila being stereotypical rescue bait. The story of the two scientists and their giant robot was actually pretty good, and a great way out of the prior issue's cliffhanger without feeling like a dodge at all. The transition into the second half was less abrupt than in prior issues and the cliffhanger has me wanting issue #5 now, which is a good thing.

The art this issue is more to my liking, with a less cart kiddie cartoon style. I'm not objectively rating the art here (or in any of these) as I am no artist, but I know what I like and this is probably right behind Neal Adams' art in issue #2 for this series thus far.

Lastly we come to world building, because ultimately the setting is as much a character in this series as Kamandi or any other. We get, through the robot builders, a good bit of exposition and background about the Jaguar Sun Cult, and it quickly fills in that culture in a way I feel like we sadly did not get for the God Watchers last issue. We also get, through art and words a good amount of information about the Kanga Rat Murder Society. There's an interesting mention about the giant wall holding back something, and visually we get a strong sense that the Society has access to some very high levels of technology, which should hopefully prove very interesting next issue.

Rating: 85% - I dock 15% for a cliched lack of agency in the sole female character in an otherwise great issue.
Posted by Marc Plourde at 12:30 PM